No, seriously.  This guy came and knocked on the door one day, and I don't usually pay any more attention to random strangers trying to sell me something at the door than you probably do, but I guess he must have said "free" enough times to penetrate my consciousness, so I found myself agreeing to have someone check our house's suitability for solar panels.  And another guy turned up, and measured; and another one, and we signed; and a few more, and put up scaffolding and panels and meter boxes and cable; and suddenly, if we're careful, we can avoid paying for any electricity during daylight hours, because it's all generated right up there above our heads. 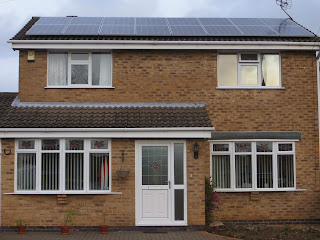 Of course, we have the British government to thank for this, which probably means we're paying for it somewhere along the line.  The Department for Energy and Climate Change (presumably it's actually against climate change rather than for it, although you never know) has mandated a wonderful thing called a feed-in tariff, which means the power companies have to pay you for any electricity you produce by environmentally friendly means.  A few years ago, they paid quite a lot, which meant that lots of companies jumped into the gold mine, which predictably means that the rate is now quite a lot lower.

But there are still a few companies around that reckon they can make money by renting your roof (technically, the space just above your roof, which sounds like the most dodgy thing you ever heard, but presumably avoids any difficulties associated with separating the roof from the house), putting photovoltaic panels on it and raking in the feed-in tariff cash.  As an incentive to you to rent out that precious layer of fresh air, they not only install the whole lot for free, but you also get to use as much of that photovoltaic power as you want.  That bloke who knocked on our front door was from a company called A Shade Greener, so that is who owns the sun-absorbing sheets that now adorn our roof.

The panels have only been up there a month, but so far, so good (she says cautiously).  All the installation happened with remarkably little fuss.  We have experienced the enjoyable sensation of seeing our mains electricity meter at a standstill, and we're trying to make the most of the diminishing daylight (October wasn't the best time to start on solar, was it?)

Of course it helps that I'm around during the day.  I can do washing and ironing in the morning, put something in the oven in the afternoon, and maybe even flick the electric fire on if it's cold.  It might be harder to reap the benefits if you worked all day, especially this time of year.  The panels' output seems quite variable - according to the figures we are generating anything from 14 kWh per day to zero, so perhaps I'd better check the weather forecast before slow-roasting a pork joint!  It'll take a little longer to work out exactly how much we're saving, but with no up-front costs, every little bit is a bonus.

Disclaimer: A Shade Greener is entirely unaware that I am writing this post, and have not offered me any money to do so.  They do offer a referral bonus, so if I've made you wonder about contacting them, let me know first and we might both get some cash.  Or you can just come over one sunny day and do your ironing.