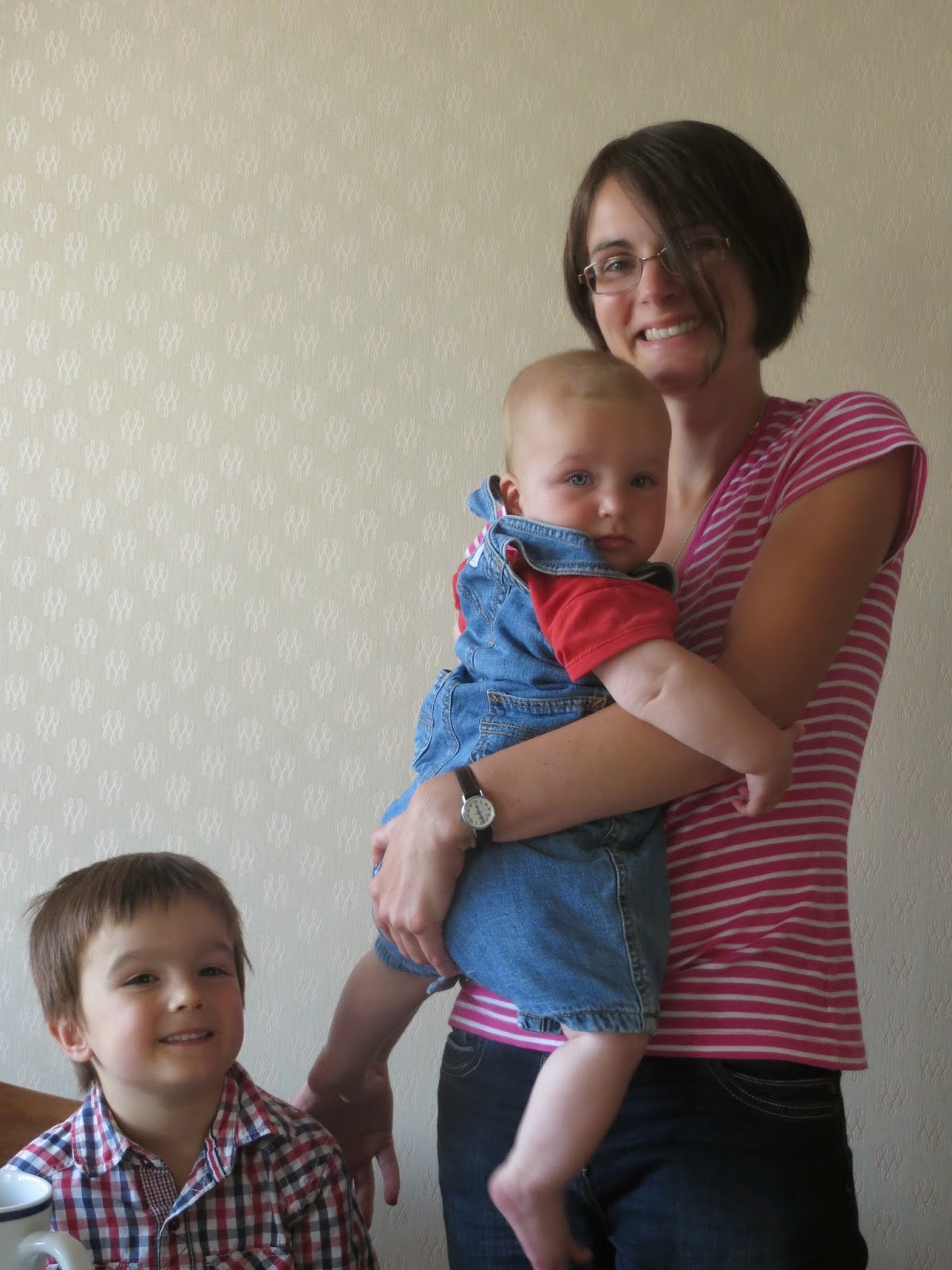 The weather this month has been beautiful, so we've been out enjoying it as much as we can - fruit picking, fete attending, gardening and walking.  Preschool is finished for the summer; I've planned weekly themes in an effort to stay sane during the holidays, so expect a few activity posts coming up.


- has made friends with the girls next door, and is getting much more confident socially

- has been loving the sandbox our neighbours gave us.  Apparently they nicknamed him "The Sandman" at preschool due to his love of digging

- pounced on a writing practice book I bought him, and worked his way all the way through to P, doing really well at tracing all the letters.

"Those clouds look like cotton wool.  They're syrup clouds."
After some confusion we figured out he meant cirrus clouds.

And I love the way preschoolers speak English the way it should be - very logically, with none of those silly exceptions.
Toby: "Mr Fox had a bouncy castle in his van."
Me: "How did it fit?"
Toby: "It was blowed down."
(Clearly if blowing something up inflates it, deflating is blowing down.) 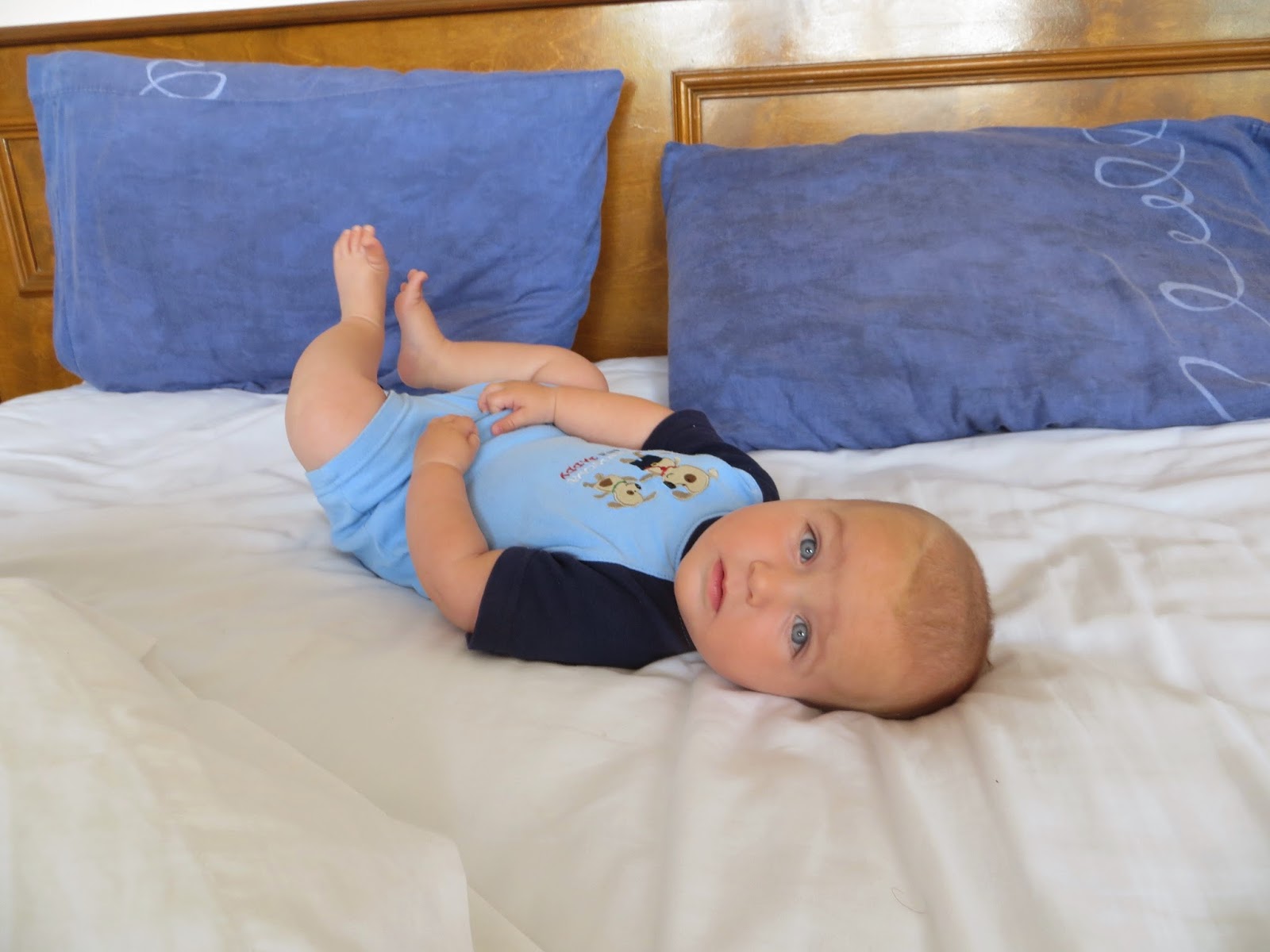 - was given a Cheerio by his big brother as his first food (necessitating a quick talk about not feeding the baby without asking Mum first), and is eating baby rice enthusiastically.


- can sit up!  He still has a tendency to fold himself in two (how are babies so flexible?) but the balance is coming. 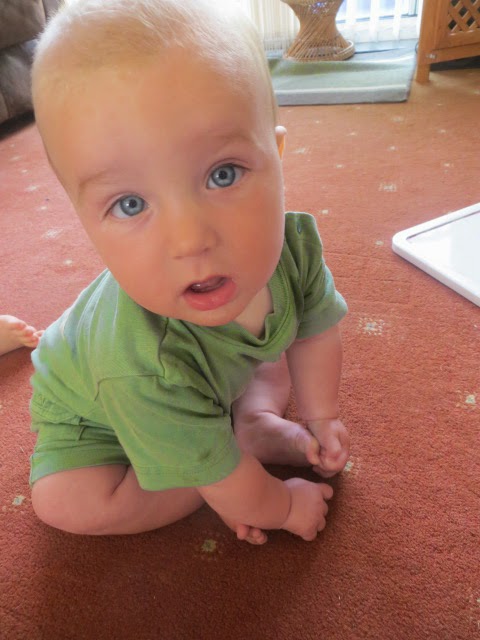 - wishes to tell you VERY LOUDLY that his first tooth coming through is EXTREMELY PAINFUL.

- but when it's not hurting he is still a very happy baby.

- a fun ladies' meal out at Nando's

- surviving the first week and a half of the holidays

- being skinnier than I've been for a long time, thanks to chubby baby eating all my calories (I have to make the most of it before he gets onto solid food and I gain it all back!)

Recipe of the Month: Blackcurrant muffins 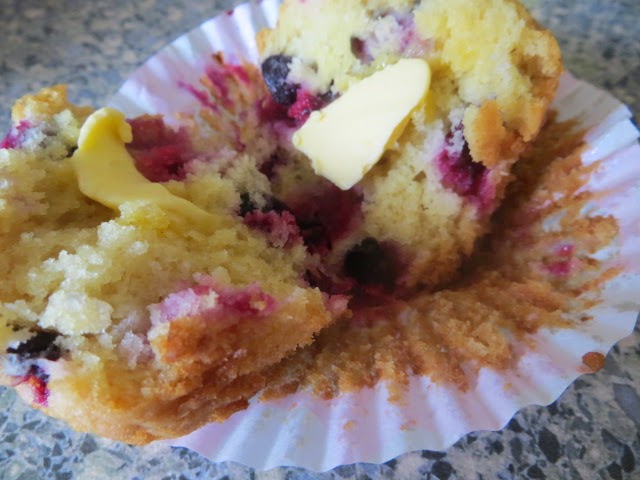 There's a pick your own farm near us, and we took Graham's parents along one Saturday.  Between us we acquired several pounds of strawberries, gooseberries, raspberries and blackcurrants.  I adapted a blueberry muffin recipe to use some blackcurrants; they are somewhat tarter but still very tasty.

Preheat oven to 180°C / 350°F.  Sift dry ingredients into a large bowl.  Stir in combined egg, milk and oil, then blackcurrants.  Do not overmix.  Spoon into lined muffin holes.  Bake about 20 minutes.  Makes about 10.

Posted by Martha at 16:07 No comments: Links to this post

What did you just call me?

Moreover, I could probably count on the fingers of one hand those that I have addressed in such a fashion over the last ten years or so.  Some of the more senior managers at work.  My obstetrician, if "Doctor" falls into the same category as Mr and Mrs.  Slightly unusually, the couple we bought our house from - at least for the first two or three meetings.

It is perhaps not surprising, then, that I had never given a thought to how Toby referred to adults.  We used our friends' first names; therefore he did, too.  At church, in our neighbourhood, even when he started preschool, no one differentiated between how they introduced themselves to us, the grown-ups, or him, the child.  Like me, they probably hardly ever think of themselves as a Mr or Mrs.  Unless, of course, they're a teacher - that final bastion of Mr-and-Mrs-dom.

Then the other day I was having a conversation with a friend about etiquette, and discussing those Southern American staples of courtesy - Sir / Ma'am, useful in so many situations (including, surprisingly, telling off your kids: "Stacey! No ma'am!"); and Miss / Mr Firstname, for anyone you feel needs little more respect than their first name alone might confer.  Growing up in Texas, my friend had had these conventions impressed on her since babyhood.  While we were there, we slipped relatively easily into the same usage.  But Toby, at that stage, was either non-existent or barely talking, and certainly unlikely to be hollering, "Hey!  Barbara!" at respectable old ladies.  It wasn't until we returned to England that he was likely to be using anyone's name when actually talking to them - and I realised that, if Mr and Mrs are dead, there is no polite British equivalent to those Texan terms.

I suppose the question is, does it matter?  I would never consider it to be a mark of disrespect if somebody used my first name, whatever age that somebody was - provided, of course, they weren't saying something rude to me!  Calling me Mrs White, on the other hand, would have me checking whether you were actually referring to me.  So for myself and most of my peers, it's a no-brainer.  I don't see any intrinsic benefit in perpetuating almost obsolete forms of address, purely for the sake of it.  Toby certainly comprehends the relationship between "Mrs Brown", "Lucy Brown" and "Lucy", but I don't think he would regard any of those as more polite, simply as different ways to refer to the same person.  As he encounters different situations, he will learn which are most appropriate, but I would hope, in this world of universal first names, that no one will consider him deliberately rude simply for using their given name.

Of course, I'm not giving up being called "Mum" any time soon.  Now that really is a title to be earned!
Posted by Martha at 16:19 No comments: Links to this post

Graham got a blender for Christmas, and has been using it to make very healthy smoothies involving spinach and carrots and such like.  For a while I've been eyeing it up with a view to making slightly less healthy smoothies, and I finally pounced.  Whirrrrrr yummmm. 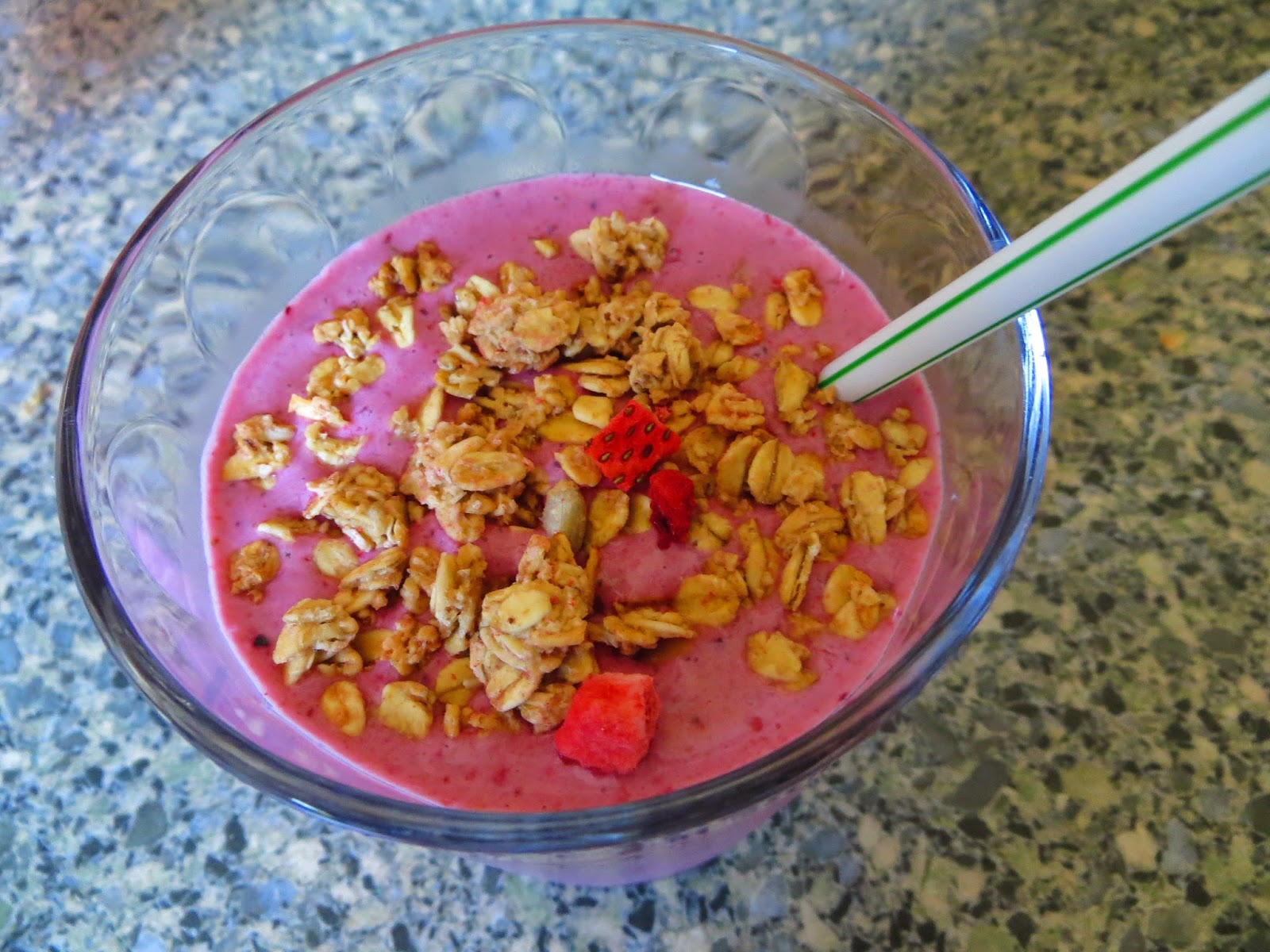 OK, this isn't particularly unhealthy, but it's the creamy kind that I like and Graham doesn't.  He gamely tried a couple of sips, but then unfortunately I had to drink the rest of his.  What a shame.  This is quite tart, just right for waking you up in the morning, but if you prefer sweeter, substitute some vanilla yoghurt for the plain, or add a spoonful of honey.

Whizz all together and sprinkle some extra granola on top.  Makes 2 servings (about 3 cups). 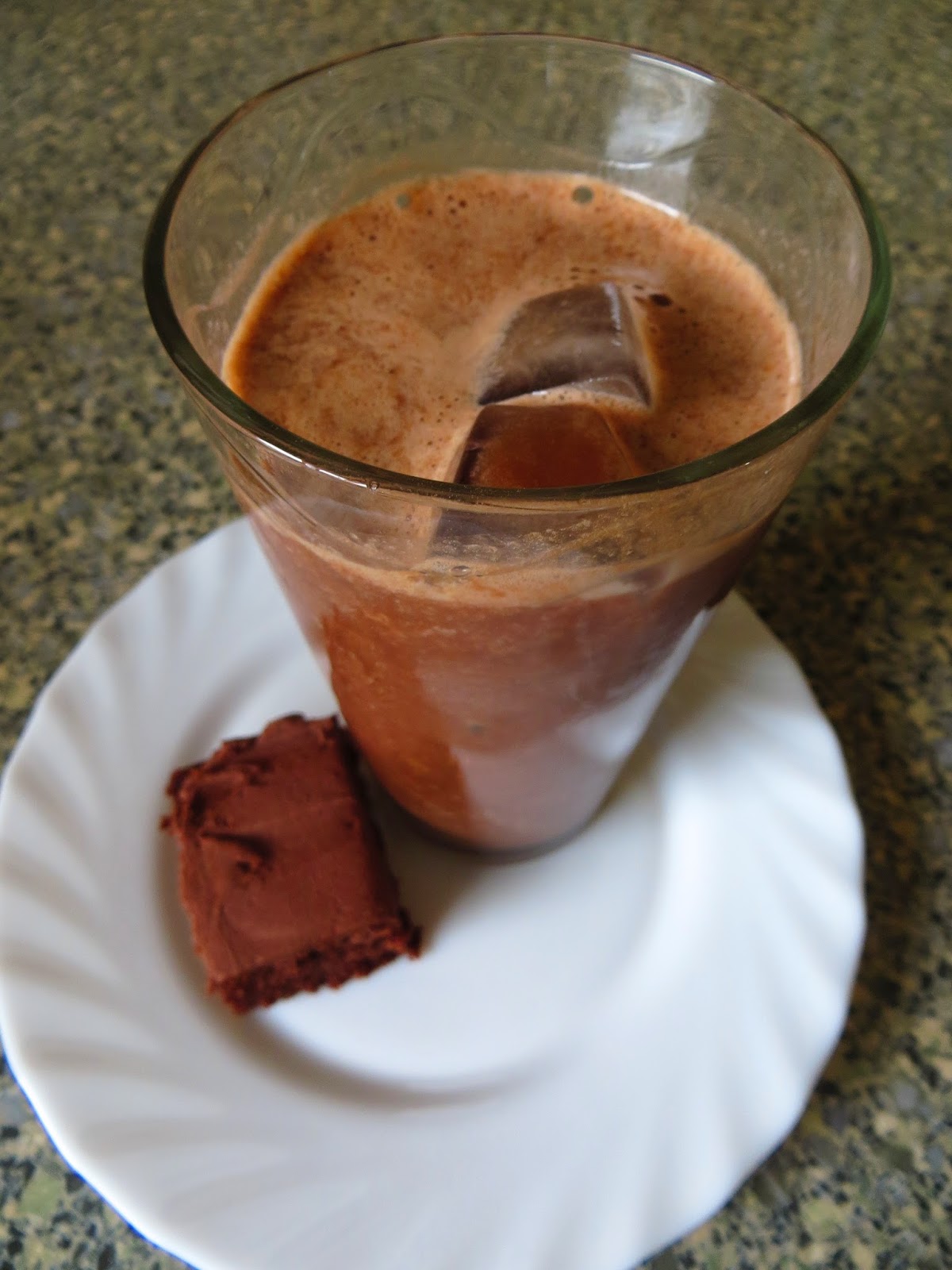 This, on the other hand, is indulgence in a glass.  I worked in an American coffee shop for a few months, and mostly stuck to plain old brewed coffee, but if I felt like a treat, it would have to be an iced mocha.  A couple of shots of espresso mixed with rich chocolate syrup, topped up with cold milk and ice.  In this smoothie version, the banana adds extra creaminess.  And vitamins.  Yeah.  Definitely vitamins.

Brew the coffee and stir in the chocolate while it's still hot.  Leave to cool in the fridge.  When cold, blend with the milk and bananas.  Serve over ice.  Makes 2 servings (about 3 1/2 cups). 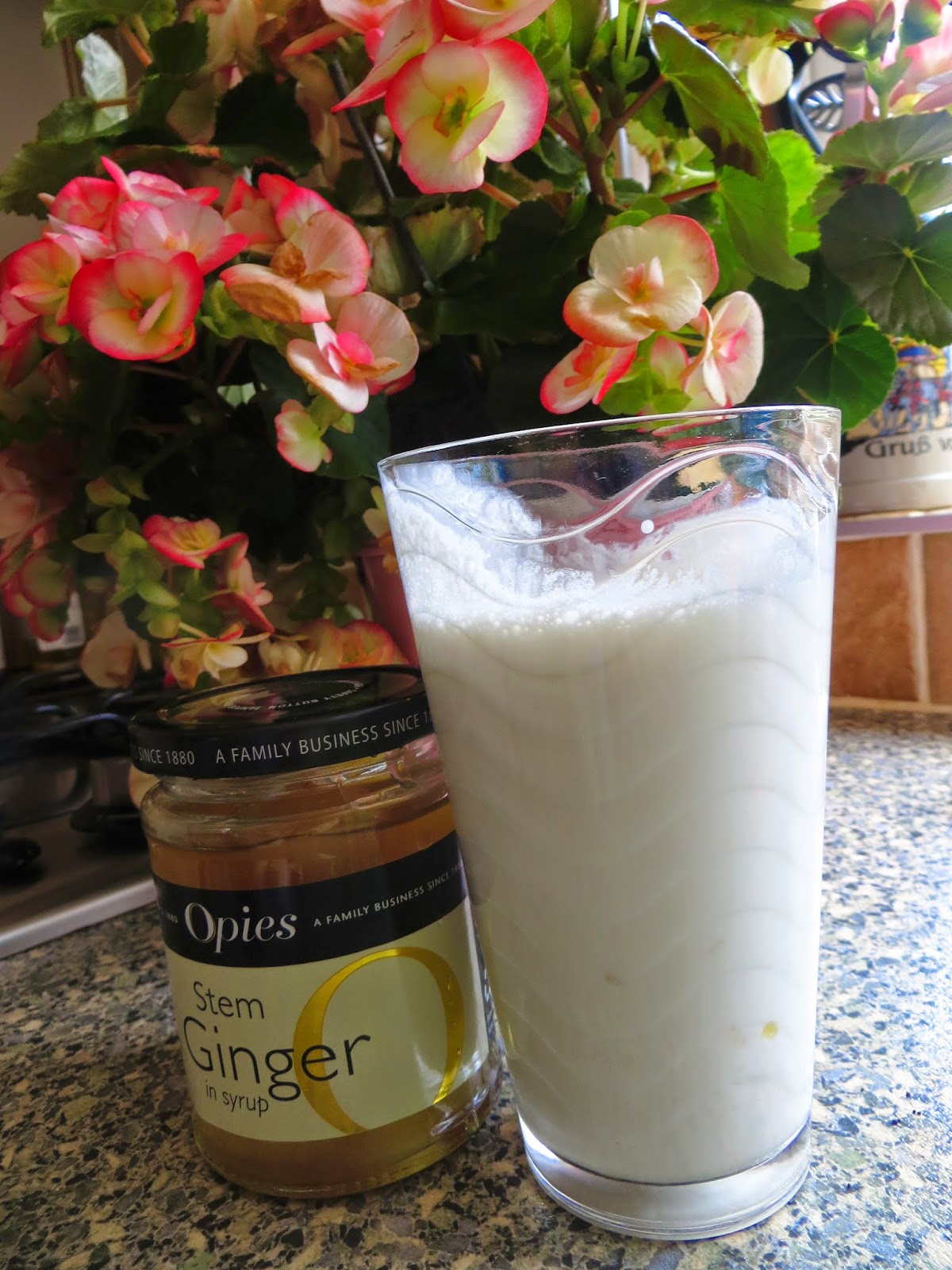 Once upon a time (was it really only six years ago?) Graham and I made our marriage vows on the beautiful island of Maui.  One enduring memory from our honeymoon is the time we happened upon a smoothie bar - where you had to pedal your own drink!  They'd rigged up bicycles to drive the blenders, so you picked your ingredients, pedalled as hard as you could, then sipped your cool frothy concoction under the palm trees.  The ginger, lime and coconut in this smoothie recall the flavours we chose that day.  A drink with some zing!

Blend everything together, and taste to check you like the balance, adding more ginger syrup or lime juice as necessary.  Sip slowly and imagine sunshine and palm trees.  Makes 2 servings (3 cups).
Posted by Martha at 13:51 No comments: Links to this post

We started the month feeling like a hotel (my parents, some university friends and Graham's family all visiting within ten days!) and ended the month staying in a hotel (our Newcastle trip).  In between we enjoyed the long days and sunshine with bike rides, barbeques, and Graham's new inflatable canoe. 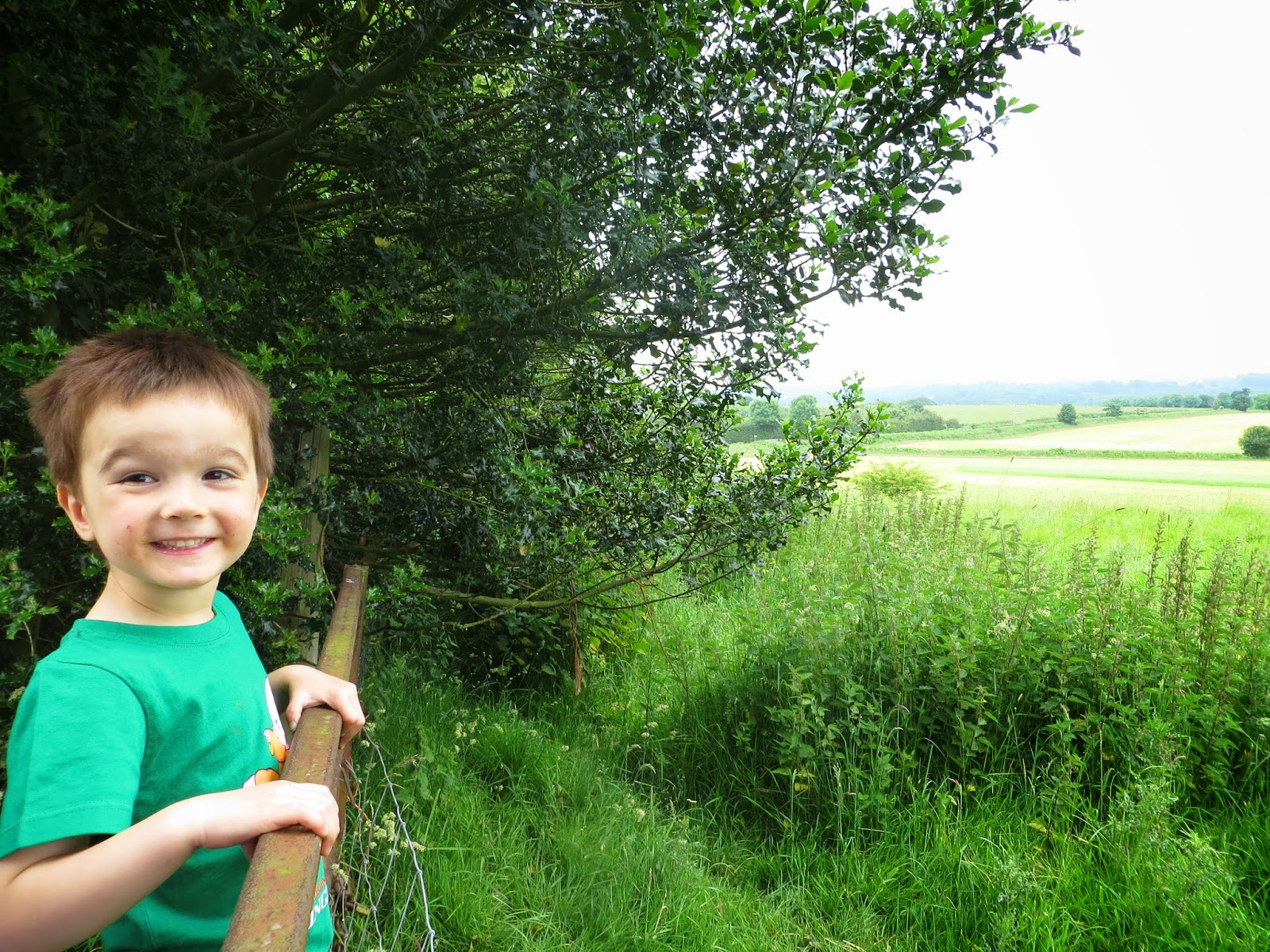 - has definitely entered the "Why?" stage.  I thought we'd skipped it, but sadly not.

- can do a scarily good snort (à la Peppa Pig) which entertains Theo no end.

- managed to sweet-talk his way behind the wheels of a Bentley Turbo R and a Massey Ferguson tractor at some recent events. 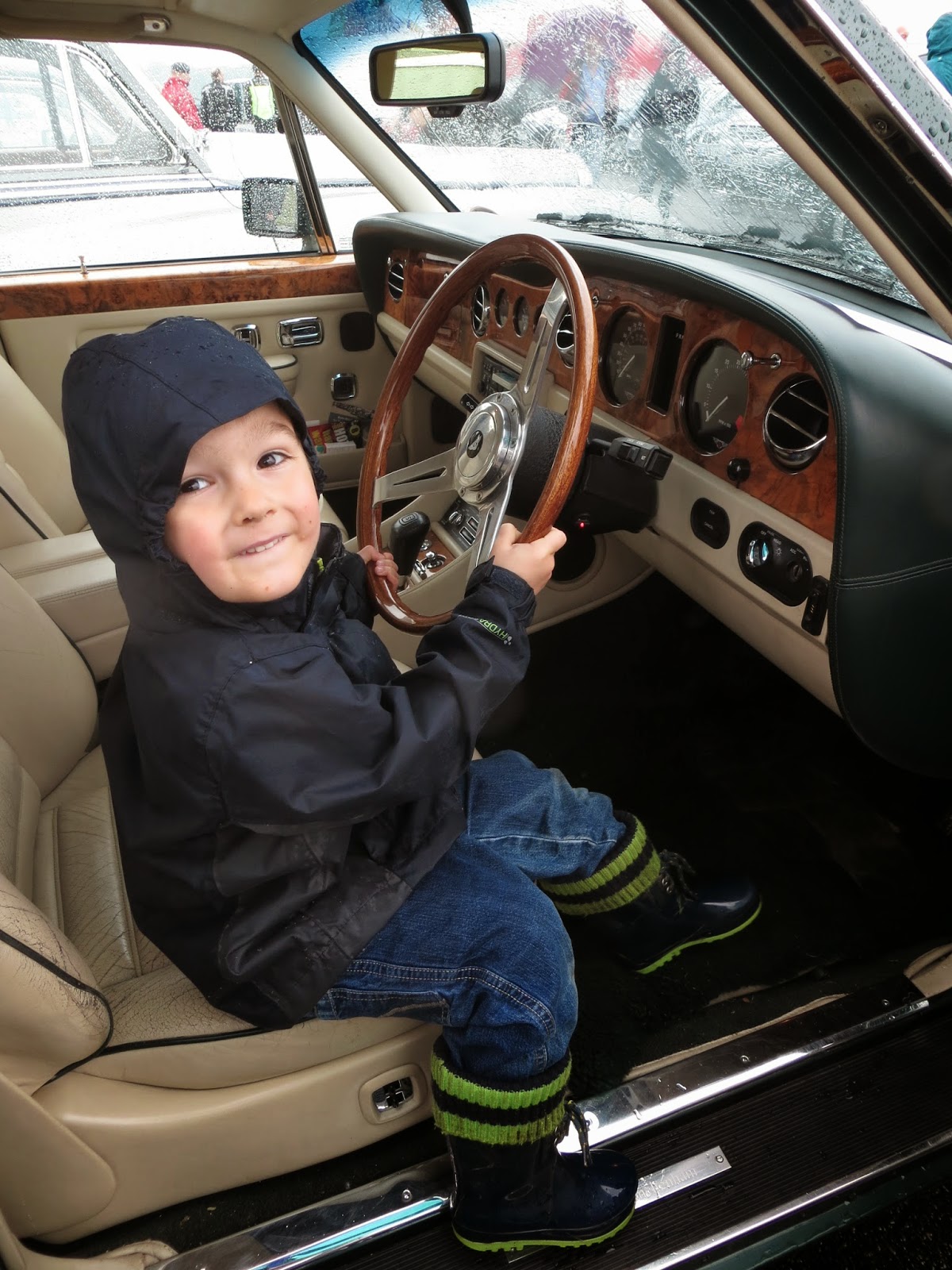 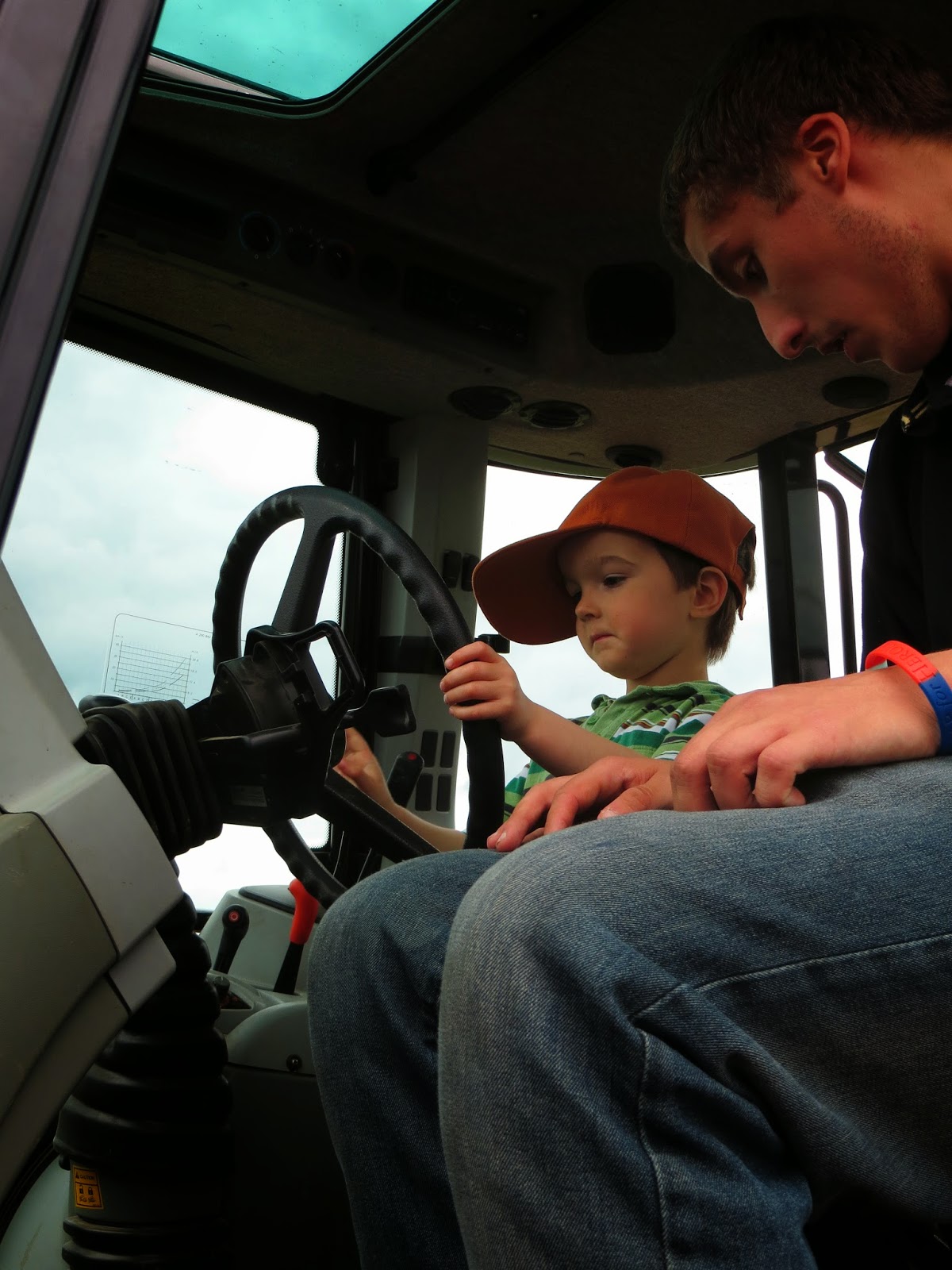 - announced that when he's five, he wants to drive a Subaru.

"I want to build with the avocado." (Meccano) 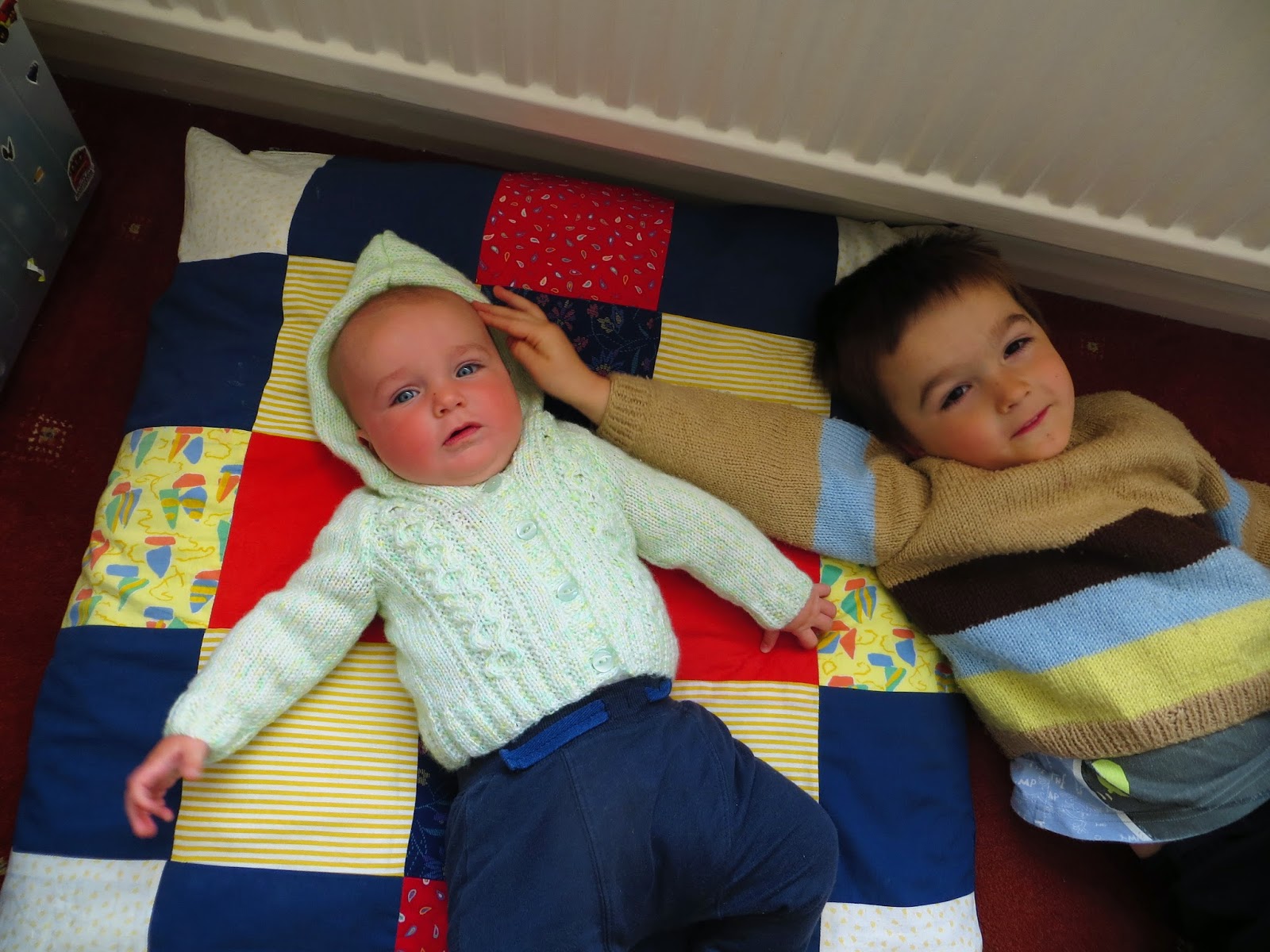 
- has definitely entered the "things in mouth" stage.

- giggles at Toby's antics, and when you tickle his cheeks.

- regularly sleeps through the night now, and gives you a big smile when you go in in the morning.  Such a sweet baby!

- strawberries from my very own plants

= several opportunities to do some cake decorating.  No paid gigs yet, but I feel like I'm not entirely forgetting all I once knew.

Recipe of the Month: Fish baked with fennel, red onion and orange 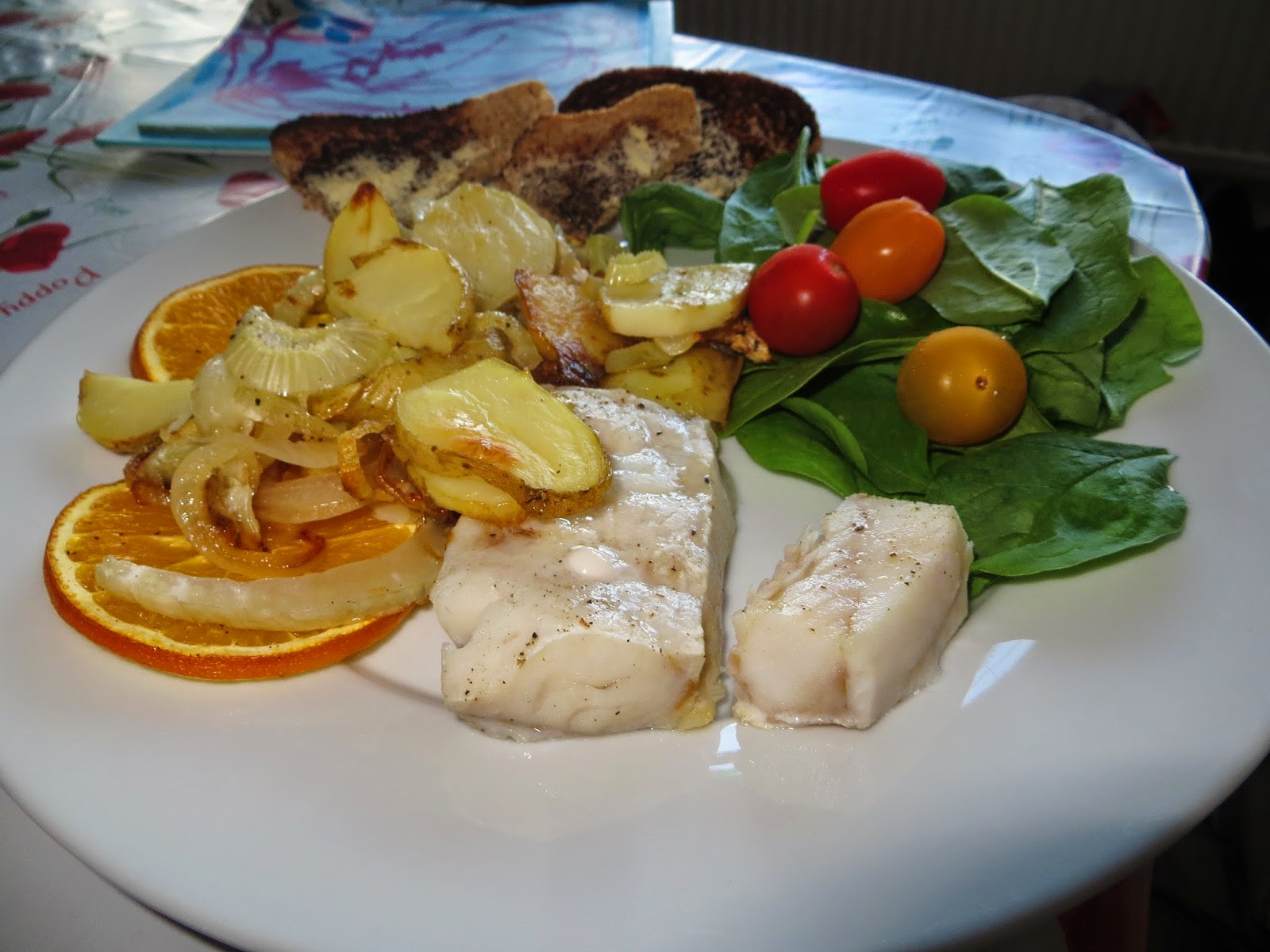 This is adapted from a recipe in the May edition of the Waitrose magazine.  I'm not sure what I think of fennel - raw, it has quite a strong aniseed flavour, but once cooked, it doesn't taste of anything much.  I liked the orange, though.  We ate this with a simple salad and some toast.

Preheat oven to 200°C.  Place fennel, onion, potatoes and orange in a baking tray.  Squeeze over any juice from the ends of the orange, and toss with 1 1/2 tbsp olive oil.   Roast for 10-15 minutes depending on whether your fish is fresh or frozen.

Give the veg a stir and add the fish (the original recipe used fresh cod; I used frozen pollock).  Drizzle with the remaining  1/2 tbsp olive oil, and season with the dill or thyme and salt and pepper.  Roast for 10-15 minutes longer.
Posted by Martha at 03:21 No comments: Links to this post