The day after Christmas Day we set off for the longest drive we have yet done in Texas: the ten-hour trip to the Gulf of Mexico.  Would you like to spend ten hours all at once in a car with a wriggly one-year-old?  No, nor did we.  Fortunately my (English) cousin was staying in the Hill Country with his (Texan) wife and their three gorgeous girls, which provided the perfect excuse to stop halfway.

Even if they hadn't been there, we still might have stopped in Fredericksburg.  It's a busy little town with a strong German influence and lots of Christmas lights.  We'd passed through before but enjoyed the chance to stay a bit longer.  The highlight of the decorations was the giant Christmas pyramid, crafted in Germany and shipped over at some vast expense.

Joe and Amie met us there, and we strolled down the street, sampling ice cream, sausages and beer as we went.  The girls were much taken with Toby, and competed to entertain him.  We were tempted to employ them on the spot as babysitters for our trip!

Later that evening we walked up Main Street once more to see the decorations by dark, then it was off to bed in preparation for our next day of driving.

This has to be the cutest wake-up call ever: In the morning Toby gave a little wiggle and a squeak, and then his head popped up just on the level with our bed, and giggled.  He wanted to drive the next stretch, but we decided he'd be better off safely in the back.

We dipped and swooped through the rolls and curves of the Hill Country, and then we were through San Antonio and on the straight flat road to the coast.  I'd thought north Texas was pretty flat, but this really took the biscuit - or indeed the metaphorical pancake.  After a while the monotony was relieved when we started spotting palm trees and realised we were at the same latitude as Florida.  Then enormous wind turbines reared up all around us, sprouting from the bare fields in orderly rows.


Finally we reached the ferry to Port Aransas.  We made the brief voyage across the ship channel, and as we docked, spotted our first pelican perched on a post.  Welcome to Mustang Island!

On our return journey we made the overnight stop in Kerrville, a pretty little place with the clear green waters of the Guadalupe River running through the town.  We discovered Billy Genes restaurant and treated ourselves to steak while we enjoyed the river view.  Graham and I each got a slice of meringue pie to go and ate it sprawled on the motel room's king size bed.

Next morning we decided we'd better work off some of that food before we got back in the car, so we made our way to Kerrville-Schreiner Park and took a stroll.  It was a still, cold, sunny morning and we had the park almost to ourselves.  We let Toby loose on the playground, where he promptly climbed as many steps as he could find, and was rescued by his anxious parents before he went head-first down the biggest slide there.


And then it was time to pack ourselves back into the PT Cruiser and cruise north again.  The less said about that final stretch the better, but suffice to say that we were all pleased to get home.
Posted by Martha at 22:45 1 comment: 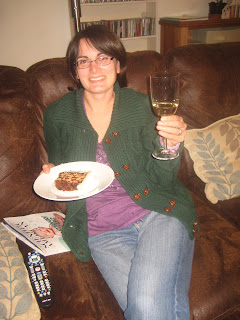 Christmas Eve: a Skype chat with my parents, a candlelit carol service and a glass of sherry and a piece of Christmas cake to round it all off.

(The sherry purchased with some difficulty from the local liquor store: "Chevy? Like the car?" and finally located in a dusty corner on the bottom shelf.  Not a popular tipple here, then.)