This is a beautiful time of year in North Texas, when the days are warm and the nights are still cool; when the grass is green and the flowers compete to bloom before the heat sets in; when butterflies emerge in clouds of bright colours and proud mother ducks shepherd little balls of fluff around the lake.  We haven't made any big excursions, but like most people, have been making the most of the time before the wilting heat drives us inside.

A few miles north of us, the small town of Roanoke markets itself as "The Unique Dining Capital of Texas", and recently put on a "Unique Week".  The festivities included live music for several evenings, so we went to hear a group called Brave Combo.  They play dance music in the widest sense of the word - their website boasts that they can turn their instruments to polka, salsa, rock, chacha and much more - and they do so with vigour!  One thing I love about Texans is that they're not ashamed to dance in public.  Any live music event is incomplete without a few older couples swaying to a two-step or a waltz, some teenage girls swinging each other round in some giggling spins, and a few kids jumping up and down in the middle.  Urged on by the lead singer, this crowd did all that, plus provided a creditable number of people willing to embarrass themselves by doing the chicken dance.  We were excluded, you understand, by having to look after Toby.  Not from any fear of embarrassment, of course. 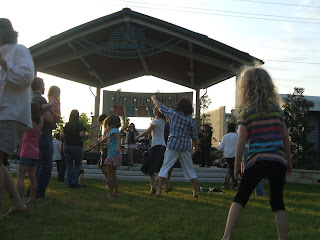 A few more miles away, the somewhat larger town of Grapevine has a botanic garden which we had never visited.  It's not quite on the scale of the Dallas or Fort Worth gardens, being more of a glorified park, but nevertheless a very pretty one.  On a pleasant Saturday morning it was crowded with photographers and picnicking families.  Toby loved the pool with a handy trickle over the edge to splash his fingers in.  Water features are one of his things right now; he happily points out everything from a neighbour's little plastic waterfall to a huge spraying fountain. 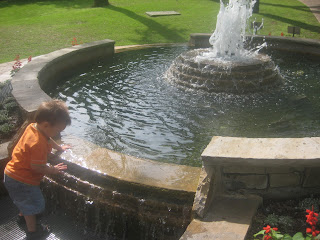 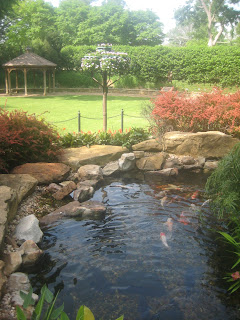 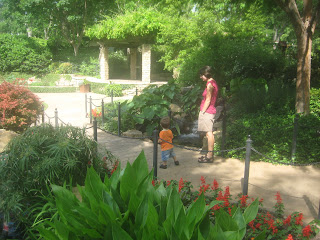 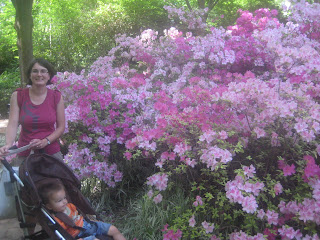 And we just had to head downtown for the annual Main Street Arts Festival.  After a harrowing attempt to navigate the crowds with a pushchair, we settled it that one of us would entertain Toby on a nice shady patch of grass while the other one toured the art.  That proved to be a much better way of seeing things.  Graham admired some intricate beaded platters, while I was taken by some handmade sets of drawers inset with beautiful leaf and flower designs.  Some brightly coloured blown glass almost made my mouth water, it looked so much like candy.  The crazy spinning mobiles are a regular feature, though there wasn't much wind for them this year.  Meanwhile, Toby met some other little boys, waved at all the buses, and relaxed with a book or two. 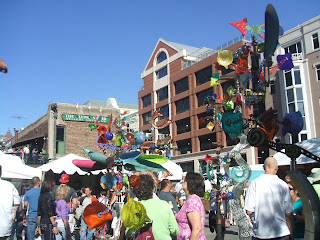 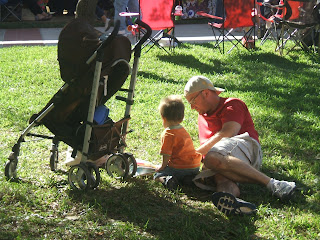 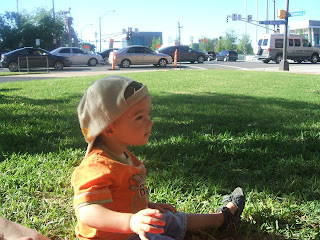 Email ThisBlogThis!Share to TwitterShare to FacebookShare to Pinterest
Labels: Days out, Texas

No, not great-grandparents, though Toby has some of those too.  But he also has two sets of just great grandparents, and one pair came to spend a few days with us last week.  All that Skyping certainly paid off; he didn't seem shy of my parents at all.  They had hardly stepped off the plane before they were reading The Very Hungry Caterpillar fifteen times over and being invited to admire every truck within sight.  In return Toby provided endless entertainment (almost literally; he didn't want to go to bed at all) and we took them to see a few pretty parts of North Texas. 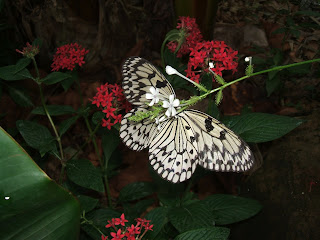 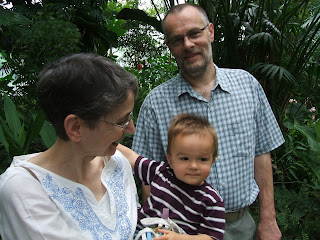 One of the prettiest has got to be the Botanic Gardens Conservatory when the butterflies are in residence.  Dainty white paper kites sip delicately from flowers, while fearless blue morphos swoop past your nose.  A giant atlas moth, one of the largest moths in the world, sat at the base of a tree.  Toby's favourite spot, though, was underneath the overhang where a waterfall splashes into a pond full of fish.  He kept dragging one or other of us back there to take just one more look. 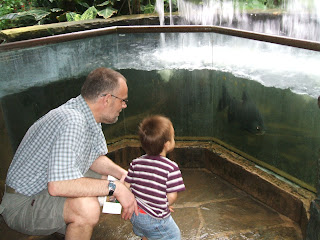 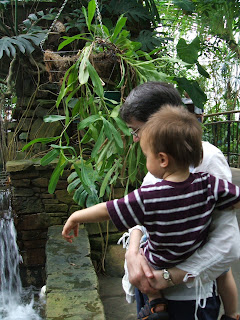 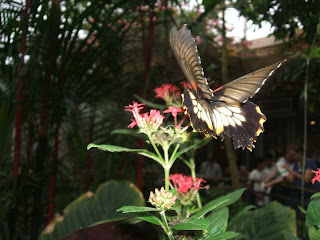 We took a stroll through the gardens and were just heading back to the car when we heard the tornado sirens going off.  That undulating wail always makes my heart beat just a bit faster, but looking around, no one seemed too concerned.  Snippets of overheard conversation suggested that any extreme weather was further south, so we shrugged, got in the car and drove home. There was a reasonably severe thunderstorm, but nothing worse.  Not so far away in Dallas, however, this was happening.


It seemed incredible that we could be a mere 30 miles away and have no damage at all. We were definitely glad Mom and Dad had flown in the day before, though!

The next day started deceptively cool and cloudy.  We were tricked into wearing several layers on our walk at Ray Roberts State Park, but once the sun got going we wished we'd ditched the jackets and brought the sun cream instead.  We followed a sandy equestrian trail through pleasant woodland, ducked through a tunnel underneath the main road, and came out by the dam on the Ray Roberts Lake.  We stopped for a drink and said hello to a horse named Hurricane Hank - a reference to his being rescued from severe weather, rather than his personality, explained his owner.  Toby promptly sat in the only available puddle, and then objected strongly to being stuffed back in his carrier for the return trip.  Between his screams and our desperately upbeat choruses of Old MacDonald, we probably scared off all wildlife in a wide radius, so there were no armadillo spottings this time.  Peace was restored with some lunch and a paddle in the lake. 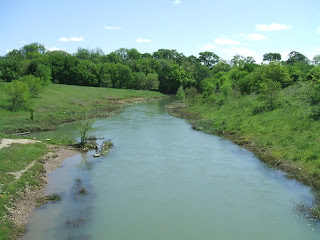 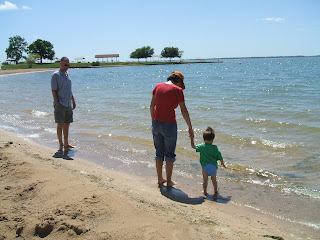 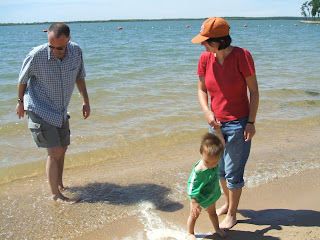 Without quite meaning to, it appeared that we had taken all our family members except my Dad to the Grapevine Sub Shop for lunch.  Word had spread, and he'd learned that he was missing out.  On the face of it, it's not much of a place to take out-of-town visitors.  The place consists of an order window and a few picnic benches plonked on the corner of Grapevine's Main Street and the very busy Northwest Highway - hardly a stunning location.  But the sandwiches are good and big, and compared to most of Grapevine's eateries, not too pricey.  Suitably stuffed, we strolled along Main St and dropped in to the railway station cum museum at the opposite end.  While we learned a little about the town's history, Toby discovered the toy train set in the corner of the waiting room.  He was very happy.  And his grandparents even bought him one for his very own! 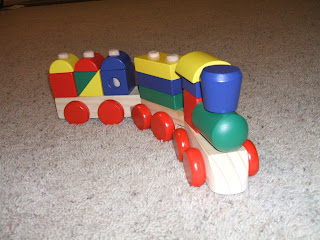 By the time we walked back up the road, we'd worked up a little appetite again.  Which is always dangerous, you know.  It leads to you spotting signs that say things like "ice cream cones $1".  Hang on, one dollar?  With the ice cream in and everything?  The lady behind the counter said, "they're only small," and proceeded to swirl about a pint of soft-serve onto each cone.  That little appetite had no chance - we barely wanted to eat anything for the rest of the day after that.

All too soon the visit was over, and Mom and Dad were off to their next port of call.  Between tornadoes, toddlers and trains, it had been quite a trip!