Last weekend we headed down to the Austin/San Antonio area for a relaxing time with a few friends. We saw the bats at the Congress Avenue bridge in Austin, had a few drinks on 6th St, went tubing, climbed Enchanted Rock, and had a meal on the River Walk in San Antonio. All of which I've blogged about before, so just click on the links if you want the details.

Pedernales Falls deserves a mention, though. We dropped in at the state park on our way from Austin to New Braunfels, and cooled down with a dip in the Pedernales River. 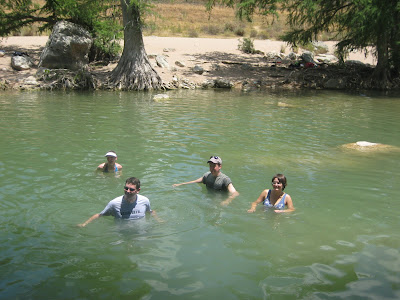 The Falls themselves weren't exactly falling, but were spectacular all the same. The river runs over some huge slabs of limestone, forming beautiful green pools and sculpting the rock into curvaceous features. 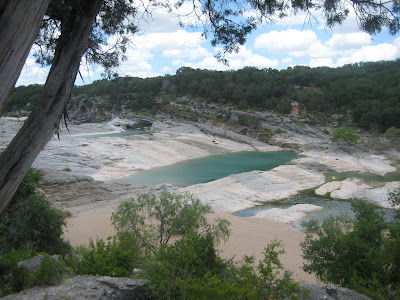 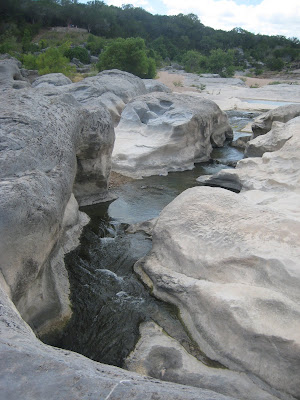 Flash flooding is apparently a common occurence; see here for some awesome before-and-after photos. All was calm and serene while we were there though. There's not a lot of spare water around Texas in the summer. 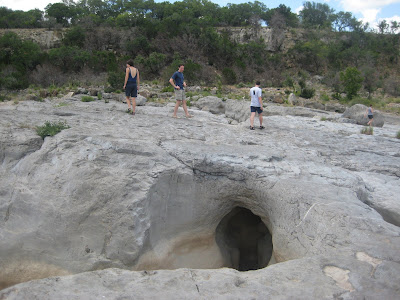 The Texas hill country is dotted with wineries, and we availed ourselves of the opportunity to do a little tasting. Choosing pretty much at random, we managed to pick two very different establishments - Grape Creek and McReynolds Wines. 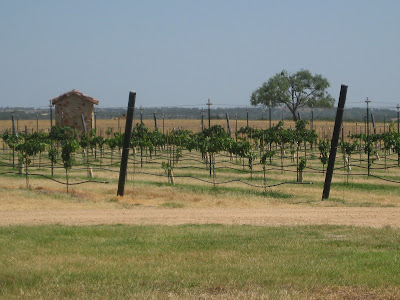 Grape Creek Vineyards advertises itself as "Tuscany in Texas" and is a beautiful site with rows of vines surrounding a shady courtyard and a recently renovated tasting room. They offer tastings of their White Label (cheaper) or Black Label wines, or you can just go for the whole lot and get a free wine glass thrown in. Which is what we did. It's all very professional, and the wines have won numerous awards. I particularly liked the refreshing Cuvee Blanc and a rather nutty port. If we'd had the time, sipping our way through a bottle in the breezy patio area would have been a perfect way to pass a Sunday afternoon. 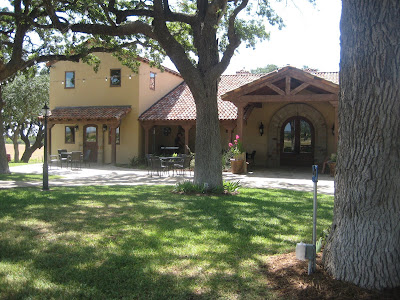 McReynolds Wines was open till 6pm, later than most; the owner, Mac, told us that this was because so many of his visitors got lost trying to find the place! It was a little farmhouse out on a country road, with a tasting room crammed with curios and festooned with humming bird feeders. Mac sloshed some wine into our glasses - and some for him as well - and entertained us while we drank with stories of his varied life. Since we were the last guests of the day, he encouraged us to finish the bottles, and those of us who weren't driving happily complied. We took a few more away with us, too. A tasty reminder of a fun weekend.
Posted by Martha at 12:51 No comments:

It's been a while, so I begin with a huge apology to all those crowds of you who have been anxiously refreshing your web browsers waiting for the next installment. What's that? Oh, well an apology to my two readers then.


Anyway, for the delight and edification of these highly dedicated followers, and anyone else who occasionally clicks on the link when they have nothing better to do, I now present the touching! the death-defying! the heart-wrenching! story of a little bird named... oh wait, we never named him. How about Peep? Peep kinda fits. So, a little bird named Peep. Here we go.


Now Peep was a baby barn swallow, and his parents have made previous appearances in this blog. They hadn't had an easy time of it, as their first nest had been destroyed, and they'd had to find mud and grass to build a new one. Into this mud cocoon Peep was born, featherless and tiny. Little did he know that certain humans considered his kind to be dirty and messy - a health hazard, in short, and not in keeping with the image they wished to convey. The order came down from above: Destroy The Nests.


Thus it was that Peep made an unscheduled vertical journey of about 15 feet onto hard concrete. He wasn't nearly big enough to fly yet, but he was the biggest of his brood. His three brothers and sisters all died. Fortunately for Peep, a kind male human left his apartment to go to work before the man with the blower came round to clear away the remains. His exclamation of distress alerted a female, who carefully scooped Peep up and popped him back in the remains of the nest. Safe for now, Peep sat on a ledge in the hope that his parents might come back and find him. 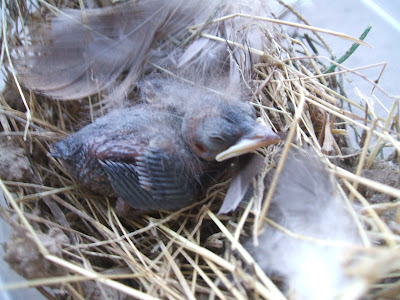 Meanwhile, some extensive internet research and telephoning on the part of the female human revealed that barn swallows are more important than you might think. They are, in fact, protected by the Migratory Bird Treaty Act, and nobody ought to be pulling down nests which have chicks in them. Or even eggs, for that matter. Armed with this information, the woman stormed the stronghold of those who perpetrated this foul deed (aka the rental office), only to be met with complete indifference. She called the US Fish and Wildlife Service. The agent was out. She discovered a bird rescue center. It was 40 miles away and she didn't have a car. She drew all kinds of blanks. Peep's fate still hung in the balance. Would his parents work out where he was? Would they be allowed to stay? Was there anywhere else he could go?


The next day, Peep was still there. Still sitting in his nest, in a box, on a ledge. And amazingly, still alive. His parents didn't seem to be anywhere around, and Peep was feeling hungry. A hungry baby bird is all mouth, I can tell you, and Peep was opening his just as wide as he could get it. There wasn't much coming in, though. The nice humans tried a few drops of water off a wet towel, and pretty near soaked him in the process. They weren't prepared to try regurgitating insects, though, so poor Peep didn't get anything to eat. It started to seem as though Peep had been kept alive for nothing. Maybe they should have just let the man with the blower sweep him away. 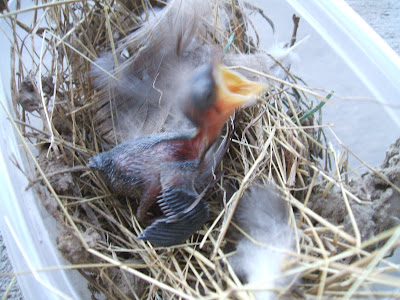 Finally, after another round of frantic telephoning, they found a lady who took in abandoned birds. They called her. She could take him. Now? Now would be fine.


Peep's fortunes were suddenly looking up again. For a start, he got a ride in a car, which isn't a claim many barn swallows can make. Then he landed on the doorstep of someone who really knew how to look after him. He lost contact with the kind couple who first picked him up, but they hoped he survived. He deserved to.

(The Fish and Wildlife agent did call back a few days later and promised to speak to the apartment management. A happy ending all round.)
Posted by Martha at 16:28 No comments:

Email ThisBlogThis!Share to TwitterShare to FacebookShare to Pinterest
Labels: Writing

After a long wait and some disappointment along the way, the tomato plants are finally bearing ripe fruit! We ceremonially shared the red one in this picture, and its neighbours are now looking ready to pluck. (They're cherry tomato plants, so yes, the fruit is meant to be that small.) 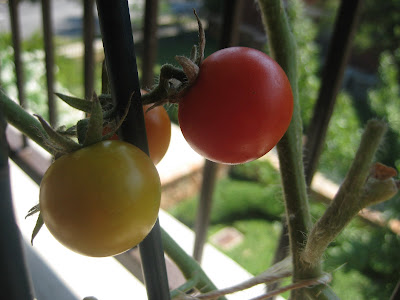 Unfortunately the leaves aren't doing so well, suffering from something-or-other that's making them wilt and die, one branch at a time. Tomatoes appear to suffer from a bewildering variety of pests and diseases, and I don't know what's wrong with mine this time. Sometimes I wonder if this gardening thing is worth the effort. We've hardly had an abundance of crop - though it is my first real try at growing vegetables, and in a very different climate as well. Maybe next time I should stick to prickly pears.


A friend organised a jewellery-making class recently, so I went along and managed to produce something wearable. In fact the process is very easy. You find yourself some pretty paper, and sandwich two pieces back-to-back between pieces of microscope slide. Then you wrap adhesive copper tape around the edges to hold it together. The fun part is using a soldering iron to spread solder all over the copper tape for the silver effect - and the hardest part is trying to get it smooth! Add a loop and chain, and bingo! you have a beautiful reversible pendant. It seems like an infinitely adaptable technique which requires relatively little equipment - definitely one to remember. 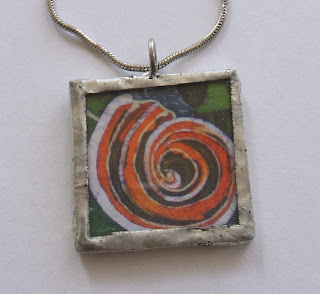 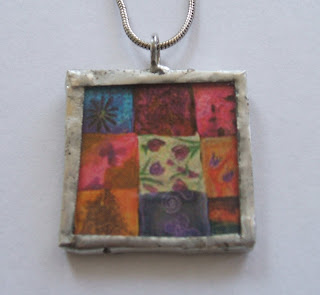