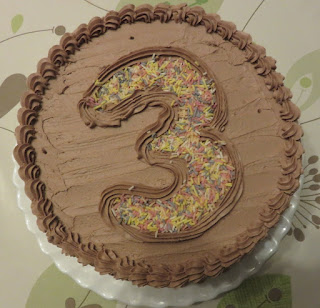 It's hard to believe our littlest one is now a chunky three-year-old who comes up to his brother's shoulder!  Yes, Theo's celebrated another birthday and is still as cute as ever (bed-hair and all). 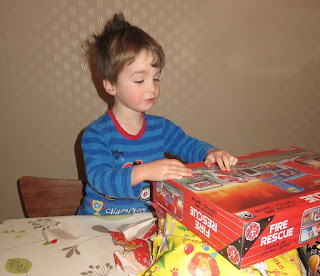 He will leap into your lap for a hug, is perpetually jumping up and down, and always wants to know what's cooking.  He loves to copy whatever Toby does.  He proudly proclaims himself "all dressed up" when he's put his own hat, coat and gloves on, and can operate the remote to turn his beloved "Paw Taprol" programme on.  He plays with toy hammers, playdough, cars and food. 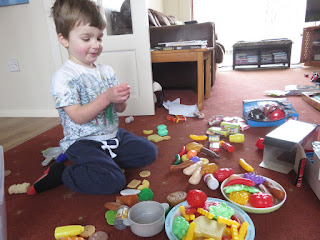 Theo's one stipulation for his birthday was that it involved "sprinkles and candles".  So we dispensed with any idea of a party, and put our energy into homemade pizza and chocolate cake instead.  I'd say that was a success.

He also opened a generous array of presents in the morning, which kept him pretty busy for the rest of the day. 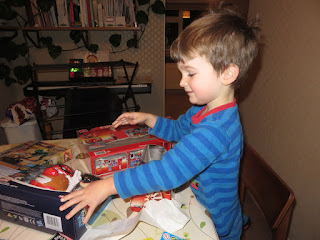 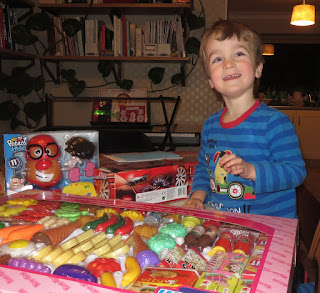 Happy birthday, gorgeous boy!
Posted by Martha at 14:26 No comments:

We celebrated New Year's Day with a party, and my birthday with a visit to the Mug Tug, a paint-a-pot place on a canal boat.  We had about two hours of snow (It fell.  It settled.  It melted.) and some very cold days.  And we made another trip to the children's emergency department. 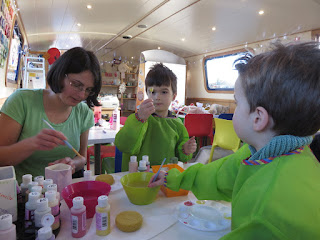 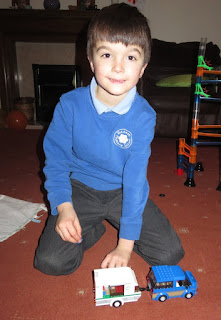 - has really got into the latest bedtime book, The Secret Garden.  He drew pictures of it and discussed what might happen next. 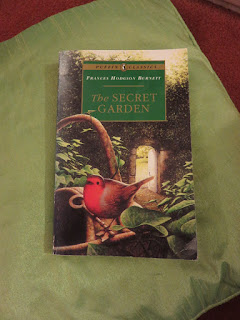 - thankfully seems to have pretty much recovered from his sickness bug.


- notices which year every car licence plate belongs to, and which ones are personalised.

- started being allowed to wear slippers at school, which inexplicably made the national press.

- painted a tank at the Mug Tug. 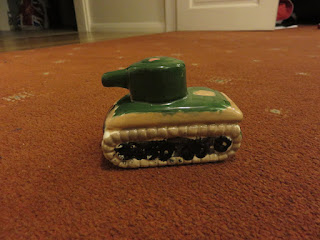 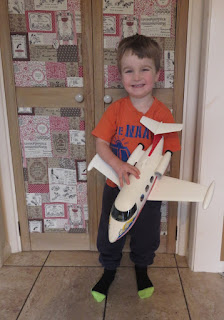 - fell down the stairs and broke his finger.  OUCH.  Two-year-olds recover remarkably quickly; he still has it strapped to the next finger, but it hardly seems to bother him.

- gave his dummies (pacifiers) away to a friend's baby, with surprisingly few negative consequences.

- wears his Gruffalo hat everywhere and gets so many admiring comments. 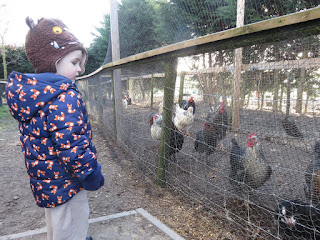 - painted a fire engine at the Mug Tug. 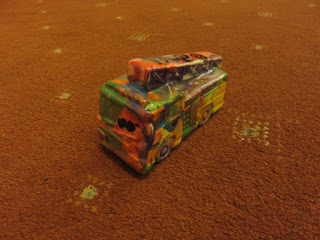 - a Bible study group I've just joined - we have some great discussions while a lovely lady takes care of our kids!

- a quick trip to the A&E and a Hand Clinic which is apparently the best in the country.

- new bedding and a new tablecloth (I know.  But the old ones were getting so shabby.)


Recipe of the Month - Roasted plums with ricotta and honey 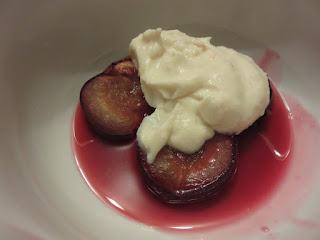 There must be a glut of plums somewhere, because they're really cheap at the moment.  I had a tub of ricotta to use up, so this made an easy dessert.

6-8 plums, halved and stoned
Spoonful of brown sugar
150g or so of ricotta
Few spoonfuls of honey
Orange or lemon zest

Arrange the plum halves in an ovenproof dish, cut side up.  Sprinkle the brown sugar over, and put just a splash of water in the bottom.  Roast at 180C for 15-20 minutes or until they're soft.

Meanwhile, put the ricotta in a bowl and add honey and orange or lemon zest to taste.  Beat well.

Put the hot plums in bowls and top each serving with a dollop of ricotta mixture.  Eat straight away.