Once upon a time, back in 1795 or so, lived a man who was always asking questions.  The kind of questions like, "Why is glass transparent?" or "Why do fruit trees grow better in that place than in this place?" or "What does the earth look like underneath the surface?"  This last question was one that he was particularly interested in, and he went so far as to work out what the rock layers looked like where he lived, and draw little pictures of them.  Now he was a marble sculptor by trade (as well as fossil hunter, mineral seller, and a few other things) so he thought it would be even better to make his little pictures in stone.  That way he could represent the layers using the actual rocks they were composed of.  Over the course of his lifetime he made almost 100 of these tablets, as he called them.

Then he died.  And no one else was quite as interested in all those rocks and minerals as he was.  His collection was sold off, bit by bit, and the tablets were scattered like so much marble confetti - a few here, a few there.  Propped on mantelpieces as curiosities, or gathering dust in someone's attic.

A few made their way to museums.  Derby Museum acquired a handful.  They were displayed and stored and photographed and flooded - and still survived.

Over two hundred years later, lived a lady who went to the library.  And picked up a card.  And the card said: 1001 Words Writing Competition.  So she went to Derby Museum to look at 1001 objects, and one of those objects caught her eye.  The caption was: Tablet of Ecton Hill, by White Watson. 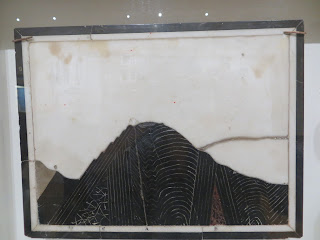 Thus Martha White was introduced to White Watson, 18th century geologist, botanist, silhouette artist, and maker of marble tablets.  Quite apart from his first name (which turned out to be his mother's maiden name), he sounded like an all-round interesting guy.  Well worth writing 1001 words about. 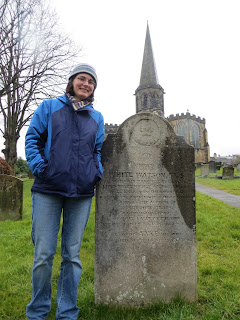 To do so entailed my first foray into any kind of historical research.  Even on such a limited level I quickly realised that it's much like trying to do several of those back-to-front jigsaw puzzles all mixed together.  Wikipedia categorically stated that Watson's mother's name was Martha White - what an exciting coincidence!  Except that when I went to Bakewell library to look at some other documents, one part suggested that she was actually called Deborah, while another mentioned that her maiden name was White without bothering to mention her first name at all.  Furthermore, both of Watson's parents appeared to have been married at least twice, so he had half-siblings in all directions... and I'm confused already!

Fortunately the man himself kept fairly extensive diaries and notebooks, and some kind person had transcribed portions into a booklet, to give a fascinating insight into the trivia of his life.  I may not have discovered what White Watson's mother was called, but I could find out how much he paid for a new pair of shoes, what he planted in his garden in spring 1798, or whose birthday party he got invited to. 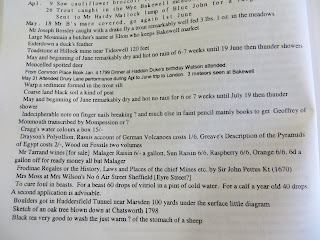 Not only that, but his snappily titled book, A Delineation of the Strata of Derbyshire, forming the surface from Bolsover in the East to Buxton in the West, by a plate designed from a Tablet composed of specimens of each stratum within the above line with an explanatory account of the same, together with a description of the fossils found in these strata and also of the nature and quality of the respective soils, (did you get all that?) is still available through Amazon for a modest fee; and reveals Watson to be a great fan of random Capital Letters, and semi-colons. 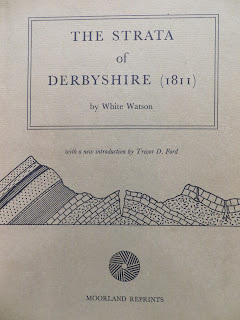 Pulling all these strands together, I crafted a letter written by Watson to his nephew William, to whom he had sent £1 (as recorded in his cash book) and the aforementioned tablet of Ecton Hill (as imagined by me).  The hardest part was getting a flavour of 17th-century style without over-spicing it to the extent of sounding 21st-century illiterate.  Most of the events referenced were real, which is far easier than having to make stuff up!  Whether it appeals to the competition judges remains to be seen, but either way I enjoyed dropping into White Watson's life for a while.

Once upon a time (so the story goes), the owner of a hotel in a little town named Bakewell asked his cook to make a jam tart.  The cook, being rather dim, managed to spread a layer of jam over the pastry shell, and then dollop some kind of eggy almondy mixture on top.  "How do you manage to screw up a simple jam tart?" cried the hotel owner.  However, being a pragmatic type, he poured some custard on it and sent it out to table 3 anyway.  The guests rather liked the new specialité du maison and bingo! the Bakewell pudding was born. 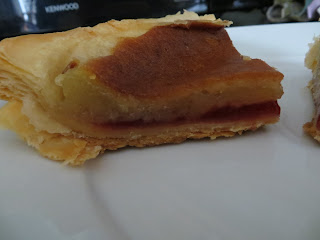 What the story doesn't tell you is that the cook was always doing things like that. "You're supposed to put the fruit on the top, dammit!" turned into pineapple upside-down cake.  "Would you like to explain exactly why you poured a mug of hot cocoa over a perfectly good chocolate cake?" led to the self-saucing chocolate pudding.  But by the third attempt, some genius had hit on the idea of naming the latest bodge-job after the town, and Bakewell's supply of tourist revenue for the next two centuries was guaranteed.

Believe it or not, I have not yet embarked on cake tourism.  My reason for visiting Bakewell, apart from it being a pretty little town in a rather nice part of the Peak District, involved a man by the name of White Watson - but who he is and why I was interested in him will be explained in another blog post.  For now, we will gloss over the few hours' research in Bakewell library, and move on to a more interesting part of the trip.  Ummm... [leafs through photos] what was that?  Oh yes, lunch! 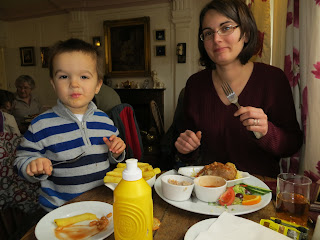 Lunch was eaten in a very English kind of cafe named Byways.  The decor made you think you had accidentally wandered into some old lady's sitting room, while the drinks menu reinforced the impression by offering you hot Ribena or Horlicks (or a nice cup of tea, of course).  And the baked potatoes were delicious. 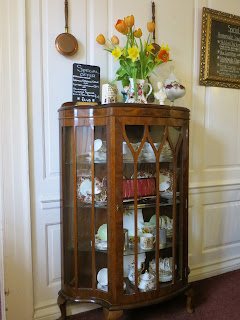 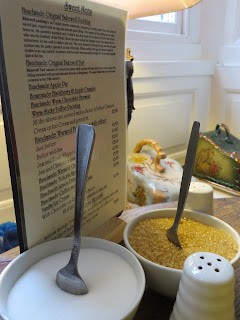 Anticipating the cold and drizzly weather, we'd booked a table at the brilliantly named Baked Well Pottery in the afternoon.  A party of excited six-year-olds were being herded out the door as we went in, but after we'd recovered from being trampled, we had the place to ourselves.  We settled down for an hour of colourful concentration.  Toby and Graham decorated a little turtle while I worked on a small pot. 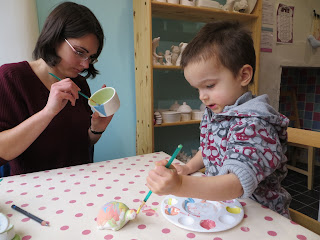 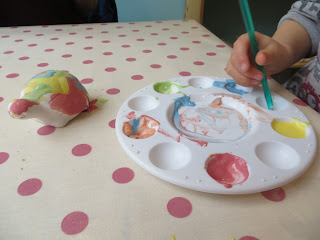 By the time we found our hotel for the night, the drizzle had turned to snow.  In the morning there was quite a thick layer. 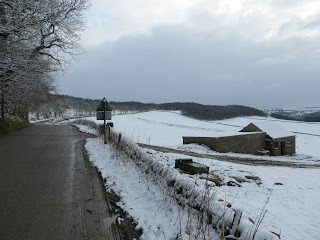 However, it was extremely variable; a few miles down the road there was almost none, then all of a sudden it would be everywhere again.  The hills had a nice sugar-dusted effect on them. 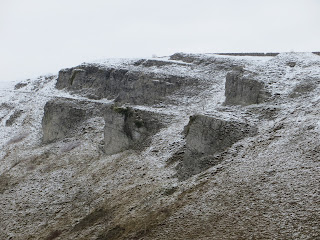 We attempted some of the Monsal Trail despite the cold.  This is a defunct railway line (always good for pushchair walks!) on which they have recently reopened some of the old tunnels.  We shivered our way to Headstone tunnel and enjoyed the views from the viaduct beyond, then rushed a crying Toby back to the warm car as fast as possible.  The poor kid was cold and tired - never a good combination - but a long nap in the car solved those problems, and let us enjoy a quiet picnic-with-a-view before the drive home. 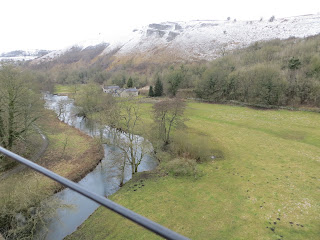 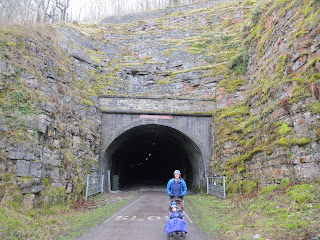 Did I say I didn't do cake tourism?  Well, it would be rude not to visit even one of those many "Only Original and Authentic Bakewell Pudding" shops, now wouldn't it?