November 02, 2014
Yes, Toby got two birthday cakes this year.  I was flicking through my children's birthday cake book to see if it had a pirate ship or something, and he got all excited about the frog cake.  So, because I am a pushover an enthusiastic baker, I agreed to bake a frog the week after his birthday, when my parents came to visit.  Because it's pretty hard to work a frog prince into a pirate theme.

The cake book came up zero on pirate cakes, but fortunately the amazing Ellie gave her daughter a pirate party a few years ago - and blogged about the cake she made.  The recipe sounded tasty so I thought I'd give it a try in place of my standard chocolate cake.  I doubled it, which gave us a lot of cake, but all the party guests were quite happy to take some home.

Place dates in a saucepan and just cover with water.  Bring to the boil, then remove from the heat and add the bicarbonate of soda to give a nice fizzy effect.  Let cool for a few minutes.

Cream the butter and sugar, then add the eggs two at a time, with a little of the flour.  Fold in the rest of the flour and add the date mixture to give a runny batter.

To assemble, trim a few centimetres off the ends of each cake.  Place one cake on the board and ice with chocolate buttercream.  Arrange the trimmings of cake on top to support the second cake at an angle.  Ice all over with the remaining buttercream (it's the first time I've tried to ice the underneath of a cake!)  Cut the straps, handles and keyholes out of yellow fondant. 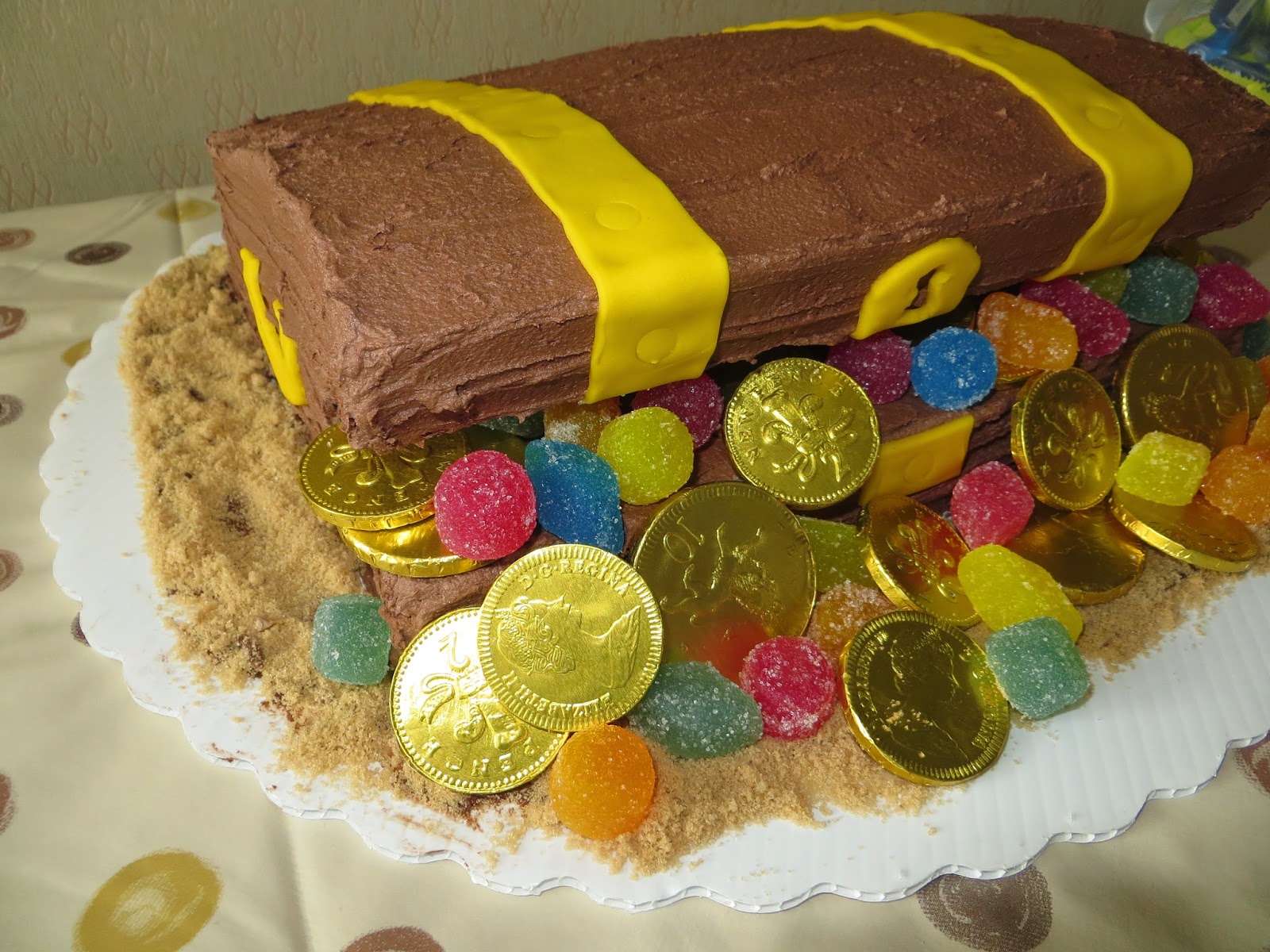 Graham's dad brought some delicious shortbread biscuits, the decorated ones of which disappeared rather quickly at the party.  I added some leftover yellow fondant to the others to make pirate treasure for Toby to take to preschool.  The imprints were made using one of the chocolate coins; this meant the image was reversed, but I doubt many of his classmates noticed. 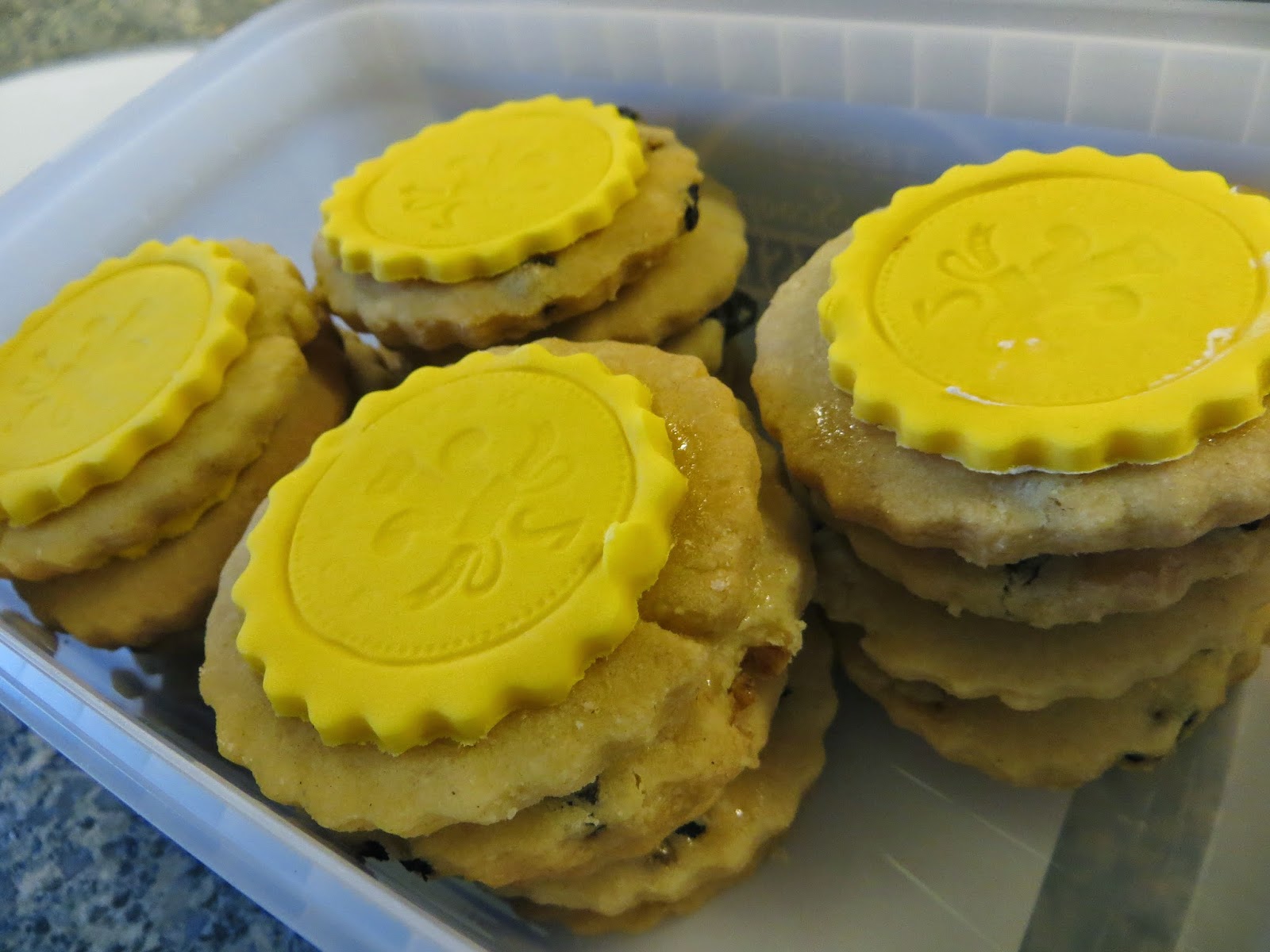 Finally, the frog!  This is simply a round cake sliced in half and set up on end.  I made a plain Madeira sponge, but filled and base-iced it with some leftover chocolate buttercream.  Layering fondant over buttercream does mean the fondant gets stickier with time, rather than setting hard, so we were eating it with a spoon by the end.

Cut cooled cake in half to give semi-circles.  Sandwich the two halves together with buttercream, and stand up on a cake board.  Cover with a thin layer of buttercream, then with green fondant.  Form the features out of white, black, pink and green fondant, and stick on.

Legs and feet: Roll out fondant to a 1/2" diameter sausage.  Rear legs are 8" lengths, folded in half and then shaped; front legs are 4" lengths.  Feet are slightly thinner sausages cut to 2" lengths.  Fold in half, flatten, and pinch slightly to form the toes.

I thought we might get away without a crown, which was supposed to be formed from fondant shaped around a glass and left to dry, then painted gold.  Toby, however, assured me that the crown was important, so we made one from shiny cardboard.

Now to make sure I don't end up doing three cakes next year!