Ten books that shaped my life

September 13, 2018
Ten books that shaped my life in some way.  Now that wasn't a problem.  I scanned the bookshelves and picked out nine favourites without the slightest difficulty (the tenth took a little longer).

The problem was that, on the Facebook challenge, I wasn't supposed to explain why.  Nope.  Having picked out my ten, I couldn't let them go without saying why they were special to me.

These books are more than a collection of words by an author.  They are particular editions of those words - taped-up, egg-stained, dust-jacketless and battered - which have come into my life, been carried around to different homes, and become part of who I am.


How to Be a Domestic Goddess 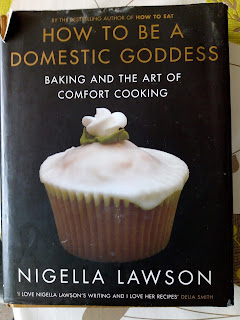 Well, every woman needs an instruction manual, doesn't she?

Nigella's recipes mean lazy Saturday mornings eating pancakes, comforting crumbles on a rainy night, Christmas cakes, savoury onion pies and mounds of bread dough.  If you avoid the occasional extravagance (20 mini Bundt tins and a kilo of pistachios? Skip that one...) her recipes pretty much always work, and work well.  My life, and my cooking, have definitely been shaped by this book.

This is the sort of cake that people label 'very rich' but then go on to have three slices with languorous ease.


The Dark is Rising 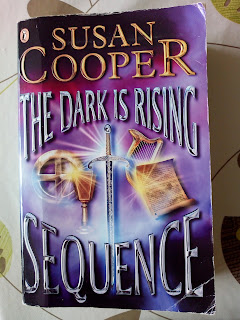 The beauty of this book is in its exceptional sense of place.  There are five books in the sequence, set in Cornwall, North Wales and Buckinghamshire, and Susan Cooper weaves in real legends and real geography into her fictional fantasy.  When the white mare leaps the Thames "to the side that is the end of Buckinghamshire, the beginning of Berkshire", I was almost sure I could find the exact spot, not 20 miles from my home; and when my parents bought a travel guide to North Wales, I dipped into it to find mention of the Brenin Llwyd, the Grey King of the fourth book in the series.  Just recently I discovered that the Trefeddian Hotel even exists (and, moreover, has excellent facilities for children) so now, of course, I want to go there and "be on the beach at sunrise"...

And in a great blaze of yellow-white light, the sun rose over Hunter's Combe and the valley of the Thames.


Sapiens: A Brief History of Humankind 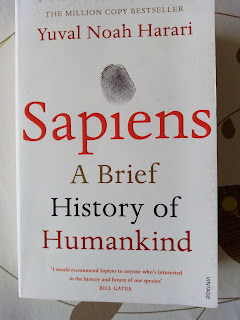 A new arrival on my bookshelf.  You have to marvel at the sheer effrontery of a guy who undertakes to write a history of the entire human race, and you have to marvel at his ability when he manages to do it readably and entertainingly.  If you want to know why wheat really domesticated us, rather than vice versa, or how a bank can turn $1 million into $10 million because we trust the future, Sapiens is worth a read.

Humanity's search for an easier life released immense forces of change that transformed the world in ways nobody wanted or envisioned. 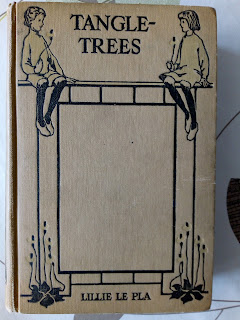 Before Tangletrees came to my bookshelf, it lived at my Nanna and Grandpop's house, along with a shelf of Agatha Christies, a box of toys, and a magazine rack of People's Friends, which I used to read behind the sofa.  I made a beeline for Tangletrees every time we visited, and when my Grandpop died and the house had to be cleared, I was allowed to bring it home with me.  I still like the story, but it's the memories which come with this one that make it special.

"I didn't think," said the little girl drowsily to herself, as she began to feel sleepy again, "that things would ever happen to me like they do in books - but they are!" 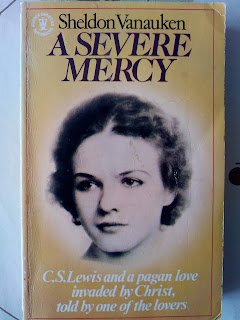 Life and death and marriage and poetry and beauty and faith and joy and sorrow.  All in one book, and one life.  Sheldon Vanauken vows to live "the heights and the depths" rather than some safe middle way, and his story gave me an idea of what love can be, and what losing that love can be.

We met angrily in the dead of winter.  I wanted my money back.  Her job was to keep me from getting it. 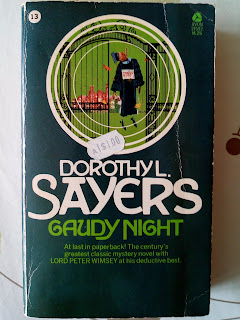 Gaudy Night stands in for the whole series of murder mysteries.  Dorothy L. Sayers is ferociously intelligent and tends to write books which make you wish you were much more educated than you are, so that you could recognise even half of the allusions she makes.  Harriet and Lord Peter conduct their romance by means of letters in Latin, and she finally accepts his proposal outside an Oxford college, while they are dressed in academic gowns.  Seriously.  Love Island it is not.

"You have the scholarly mind and you'd always feel uncomfortable knowing it was wrong, even if nobody else knew."


The Piano Shop on the Left Bank 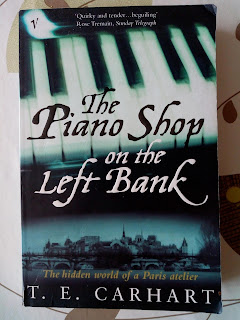 I've played the piano since I was four, and this is a fantastic book which intertwines the history and mechanics of the piano with the story of a man rediscovering his childhood love for the piano while he's living in Paris.  It brings out the magic and mystery of music beautifully.

It seemed unimaginable to me that adults would conceive of an entire contraption, at once huge and respectable, whose sole function was to make noise. 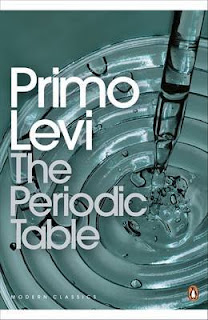 This was my tenth choice and the only one I don't currently own.  But I had to have something for chemistry.  My A-level chemistry teacher told me about Primo Levi - he was an Italian chemist who survived Auschwitz, and wrote some incredibly moving books about the experience.  The Periodic Table is a collection of short stories from his life, each linked to a different chemical element.

They are indeed so inert, so satisfied with their condition, that they do not interfere in any chemical reaction, do not combine with any other element, and for precisely this reason have gone undetected for centuries. 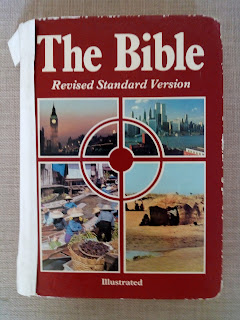 If you attended my primary school, you may recognise this particular edition of the Bible - our Year 6 leaving gift.  I could hardly avoid including the Bible among the books which have shaped my life; this one ensured that I became a life-long reader of the somewhat dated Revised Standard Version (I've recently updated to the New RSV, which avoids thees and thous).  You can see by the electrical tape down the spine that it's been pretty well used - a badge of honour for a Bible, in the same way that food splodges are for a recipe book.

In him was life, and the life was the light of men.  The light shines in the darkness, and the darkness has not overcome it. 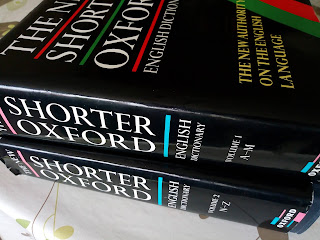 And finally: The Shorter Oxford English Dictionary (in two volumes) was my 18th birthday present from my parents.  That I was immediately absorbed in it probably tells you everything you need to know about me.  Paper reference books have been rather superseded by the internet, but I still pull it out from time to time - mostly recently to query the difference between faint and feint, and to discover that they're essentially the same word, with the same root as feign.  And if that doesn't shape my life, then I don't know what will.

Holliethehousewife said…
I love how you've summarised these! Going out to get every one I don't own. Please do more!
13 September 2018 at 10:12

Eileen said…
I want to read Primo Levi - have never heard of it, but sounds great. Have you ever read Uncle Tungsten by Oliver Sacks? I'm pretty sure you'd love it.
13 September 2018 at 14:56

Martha said…
I haven't come across Uncle Tungsten - I'll have to look for it. I haven't read Primo Levi for years, so maybe I should re-read some of his too!