February 04, 2016
I don't usually make meringues.  Once, a long time ago, I made meringues, and I think I tried to wedge far too many of them into the oven at once.  They came out extremely chewy.  Usually I tell this story to people and they say, "oh, but chewy meringues can be quite nice..."  No.  This was the kind of chewy where you bit into it and it immediately glued itself to all your teeth at once, and the roof of your mouth, and your tongue, and you spent the next half hour trying to pick bits out with your fingernails.

So, I don't usually make meringues.  But recently I had a hankering for American-style pudding.  This, for the non-Americans in the audience, is a kind of thick flavoured custard, and is the only thing an American will think of if you say the word pudding - it doesn't refer to any other kind of dessert, and particularly not the British style of baked or steamed pudding.  This is useful to remember if you are ever trying to describe, say, Christmas pudding to someone across the Atlantic.  It's a bit like Americans describing biscuits to a British person.  The mental imagery is all wrong.

Anyway, the pudding that takes me back to my childhood is butterscotch pudding with raisins in, set in individual bowls with the skin on top.  (I seem to remember you could eat half of it and then, carefully, sliiide the remaining half out, leaving a perfectly clean bowl.)  There are, however, numerous other versions, and I thought I'd try chocolate this time.  This recipe is adapted from one in the Hershey's 100th Anniversary Cookbook. 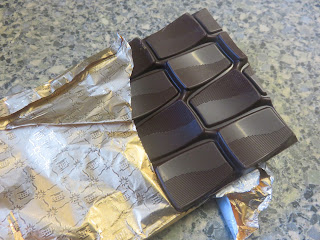 Measure out 1 cup / 250ml milk and pour it into a small saucepan.  Add the dark chocolate pieces.

Measure out the remaining 3/4 cup / 150ml milk and leave it in the jug.  Add the two egg yolks and whisk together.  In a bowl, stir together the sugar, cornflour and salt.  Add the eggy milk and mix together.

Now it's just stirring.  Gently heat the milk and chocolate, stirring constantly, until the chocolate melts.  Add the sugar mixture gradually, whisking as you go, then keep stirring until it boils.  You will think it's not thickening, then it suddenly will, all at once.  Turn the heat down and cook for a minute longer (don't stop stirring!), then remove from the heat and stir in the butter and vanilla.  Pour into a bowl.  If you don't want a skin, press some clingfilm (plastic wrap) directly onto the surface.  Leave to cool.  If you're not eating it fairly soon, put it in the fridge.

You will notice that the recipe involves two egg yolks.  Which left me with two egg whites, which brings us neatly back to the meringues.

Meringues, say all the recipes, are very simple.  You take some egg whites, and a certain proportion of sugar for each egg white, and you whisk it all up...

...in a clean, grease-free bowl.  I have a sneaking suspicion I should have double-checked the grease-free-ness of my bowl.  Or maybe it was that my egg whites came straight out of the fridge.  Whatever it was, my meringues didn't stiffen up as much as I thought they should, despite a considerable amount of whisking.  Fortunately, this recipe involved adding cocoa powder, so in the end I shrugged, chucked the cocoa in, and came out with something that was just thick enough to pipe. 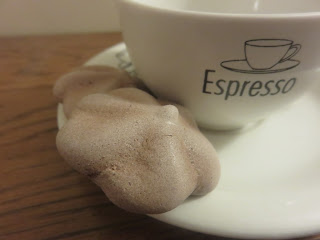 Whisk the egg whites until just standing in peaks.  Add the sugar a tablespoon at a time, whisking between each addition (yes, this is as tedious as it sounds).  Keep whisking until the mixture is stiff (or in my case, just about not runny).  Sift the cocoa powder and cinnamon over, and fold in gently.

Preheat the oven to 130C.  Line a couple of baking sheets with non-stick paper, and put the meringue mixture in a piping bags fitted with a star nozzle.  Pipe little stars (or lines, squiggles or whatever) onto the paper, and put into the oven.  Cook for an hour, switching over the trays halfway through, and then turn the oven off and leave them in the oven to cool.

If you're feeling really decadent you can dip the bases in melted chocolate.  Or sandwich them together with whipped cream.