February 28, 2016
One highlight of the month was our trip to Dovedale, in the Peak District, which deserves a post to itself, really.  We went with my parents on an icy sunny day, and our intended stroll along a fairly flat river path turned into an epic adventure!  We hauled the pushchair across stepping stones, up steps, and over rocks and mud.  Finally we abandoned it altogether for a rocky climb under a natural rock arch and into a cave.  Going up wasn't half as precarious as coming down, but we all made it back to river level, where we celebrated with a sandwich.

- was a pro at rock climbing and caving, and is already asking if we can go again. 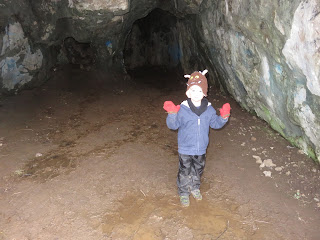 - has made a best friend at school.

- always wants to be building, making or drawing. 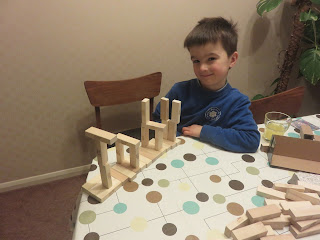 - scored highly on his curriculum topic of "Understanding the World", which is hardly surprising considering the questions he asks.   Tonight, after exploring the concept of A.D. and B.C. dates, and millions of years ago when the dinosaurs lived, I got hit with, "How old is God?" 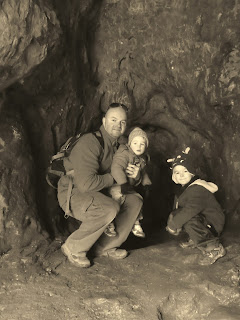 - proudly announced that he can write his full name, with all the letters in his rather lengthy middle name in the right place. 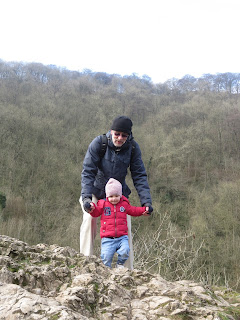 -wanted to climb up all the rocks to the cave in Dovedale, but didn't like coming down.

-gets very excited when the microwave is on, and counts, "Three, four, eight, two, ZERO!"

- is starting to put two words together to expand his communication.

- calls Toby "To-tar" for reasons best known to himself.

- can spot aeroplanes which are so distant as to be hardly more than a white dot in the blue.

- not falling off the stepping stones at Dovedale! 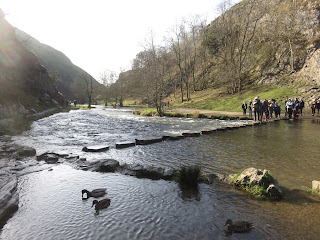 - getting out to hear some live music - Cattle & Cane and Karl and the Marx Brothers were completely different in style but both well worth listening to.

Recipe of the Month: Pancakes with Pears and Butterscotch Sauce 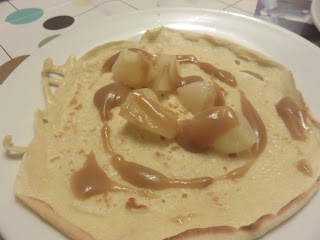 Usually we have American-style pancakes for breakfast (not every day, obviously) but on Shrove Tuesday we have English-style pancakes for dessert.  I thought this recipe sounded delicious, and I'm sure it is, but I ended up making a much-simplified version.  Here it is.

1 can of pears
butter for frying

Make the pancakes.  Put the flour and salt in a bowl.  Add the egg and half the milk, and beat well until smooth.  Add the remaining milk and whisk in.  Melt a little butter in a 20cm frying pan.  Pour in enough mixture to thinly coat the bottom of the pan (and if you know how to make it neat without being too thick, you're doing better than me!) and fry, turning once, until golden on both sides.  Keep going until you have used all the mixture, which always takes longer than you think it ought to.

Make the sauce.  Put the butter and sugar in a saucepan and heat gently until the sugar has melted.  Boil for one minute.  Blend the cornflour with a little of the milk.  Add the remaining milk to the pan and bring to the boil, stirring.  Add the cornflour and keep stirring while it boils again.  Cook for a couple of minutes, and stir in the vanilla.  Keep warm.

Drain the pears and chop into chunks.  Top each pancake with some pieces of pear and a drizzle of butterscotch sauce.