Thinking over the trip, I didn't feel like we were hugely restricted by having children in tow.  Sure, it's never so relaxed when you are constantly making sure that two small humans are adequately fed, rested, cleaned and entertained.  But there wasn't much we really missed out on.  (Except the risotto.  The Lombardy region is known more for its rice dishes than its pasta, and I did want to try a real Italian risotto.)  There were, however, a number of excursions that the boys would have preferred not to have been dragged out on.

Oh, the mountains.  The mountains were beautiful.  One day we drove north and stopped for lunch on the Passo della Presolana.  Perched above a hairpin bend on the road, we munched our focaccia surrounded by the clear cool air and the swooping, soaring peaks.


Afterwards we wound our way down to the valley floor and followed the river Dezzo past sheer rock walls dripping with water.  We stopped to see whether we could manage a shower in a waterfall, but couldn't quite get that close. 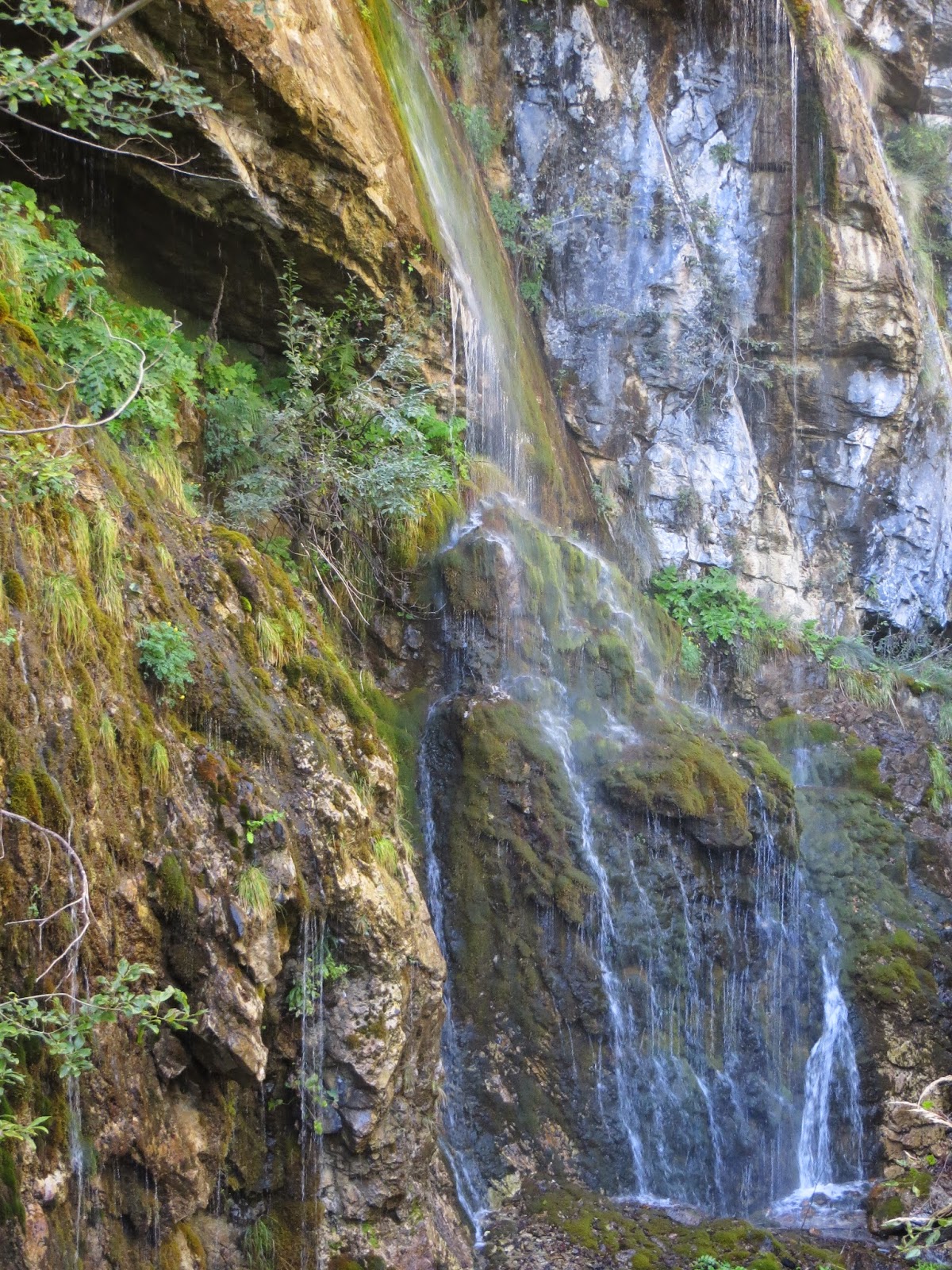 As an added bonus, we stumbled upon the small but gorgeous Lake Moro, at the top of another dozen hairpin bends.  Even Toby was persuaded to abandon Postman Pat in favour of paddling in that delicious water. 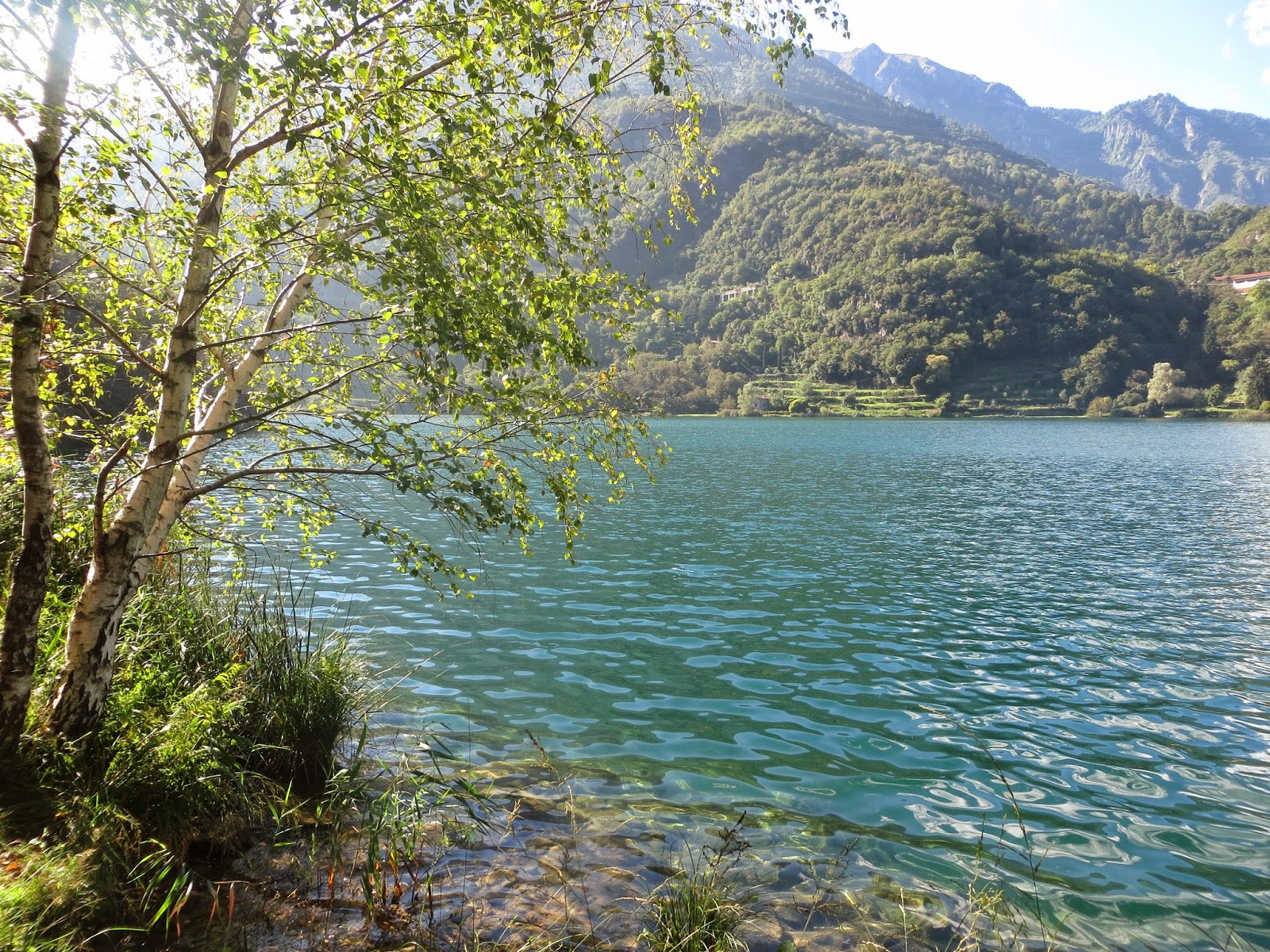 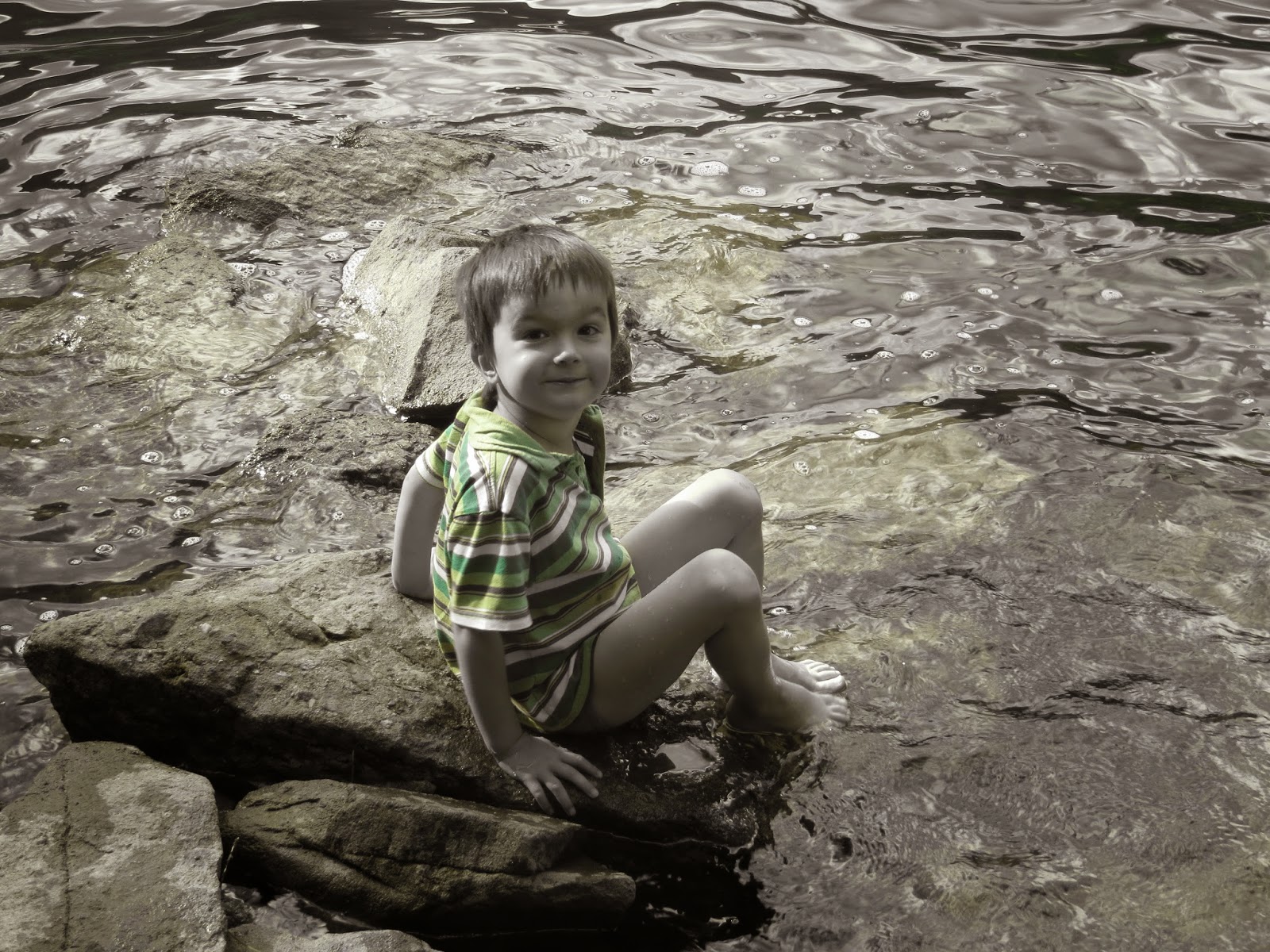 My one previous trip to Italy was organised by my school, when I was about 13.  We visited Venice, Rome and Verona, and one of my vivid memories is of drinking sweet, sticky pear nectar in the sunshine, at the top of the Roman Arena in Verona.  It was a place I'd always thought I'd like to return to.


The drive from Lovere was longer than I expected, and the navigation through Verona more confusing, but we somehow managed to find a free carpark within striking distance of the city centre.  Our first stop was the groomed greenness of the Giardino Giusti.  The sculpted trees and hedges (with a maze!) as you enter the garden give way to slopes and steps, as you climb up to sprawl in the sunlight and admire the view over the city.  We were excited to spot tiny hummingbirds on one flowering bush - so small they looked more like insects than birds. 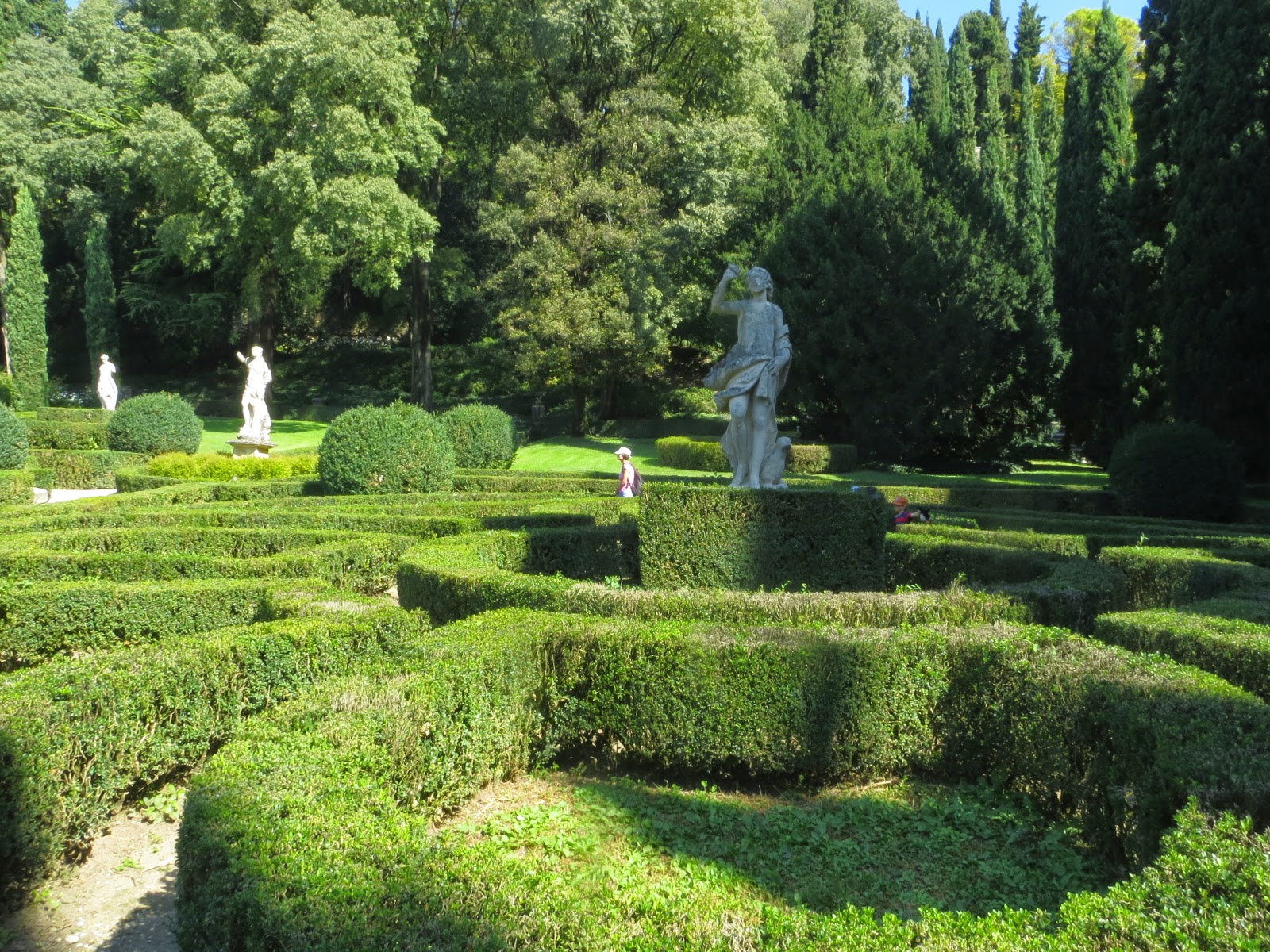 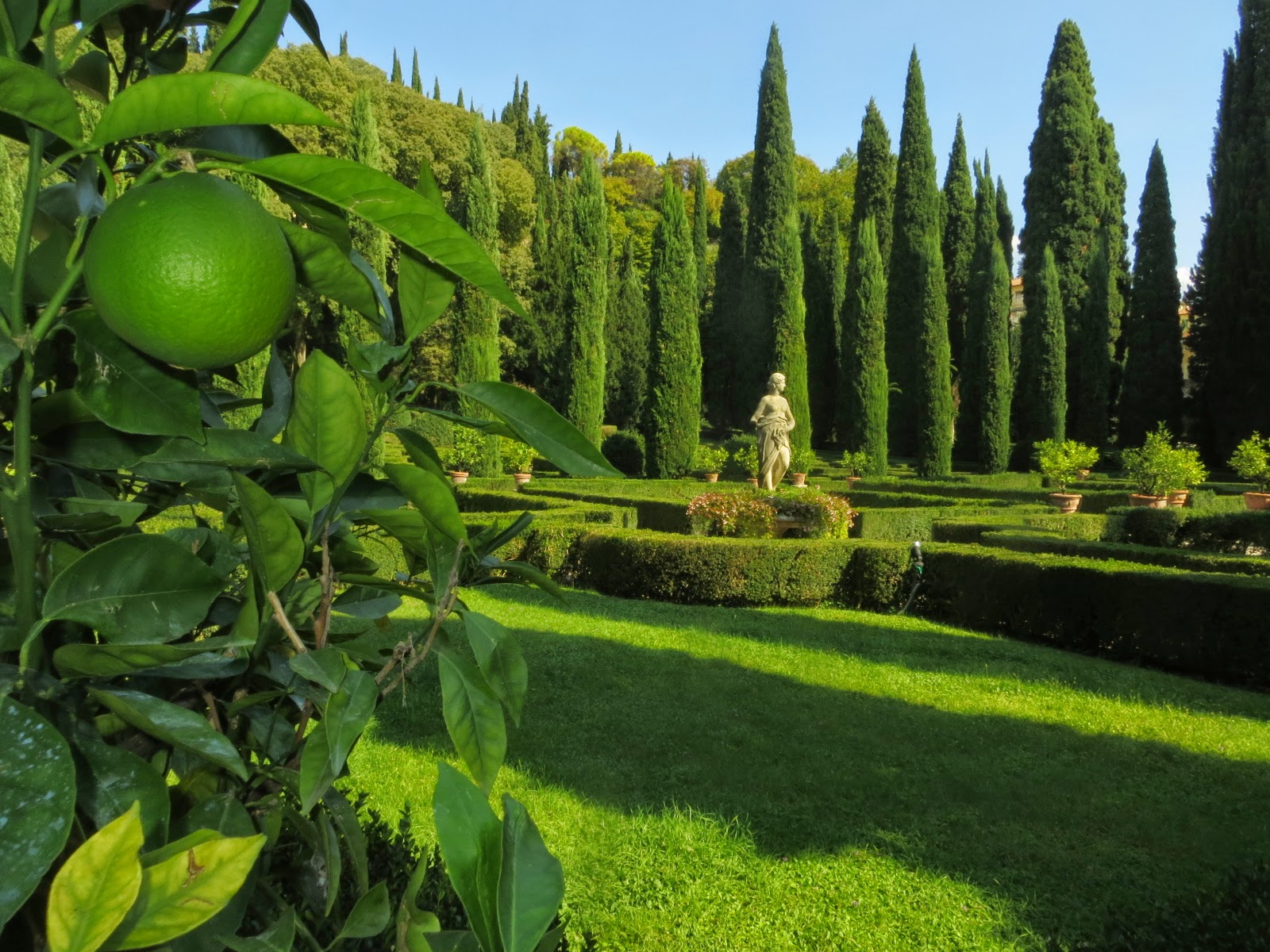 The higgledy-piggledy streets of old town Verona would be wonderful to wander through, child-free and with all the time in the world.  When you have tired, hungry children in tow and you are trying to find the quickest route to the Arena using a map which neglects to mark any street you seem able to spot the name of, they are less wonderful.  But still amazing when you get the chance to glance up. 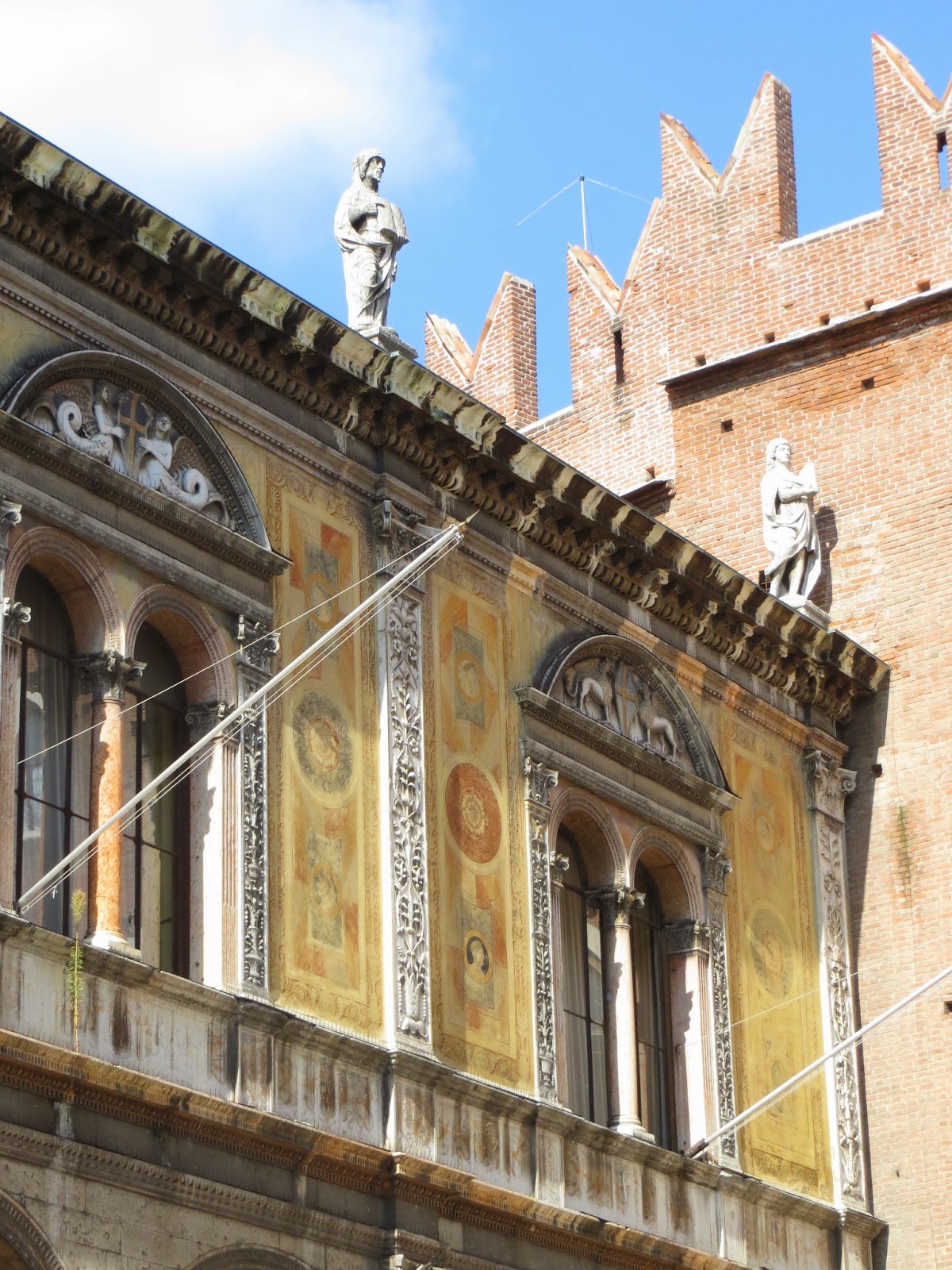 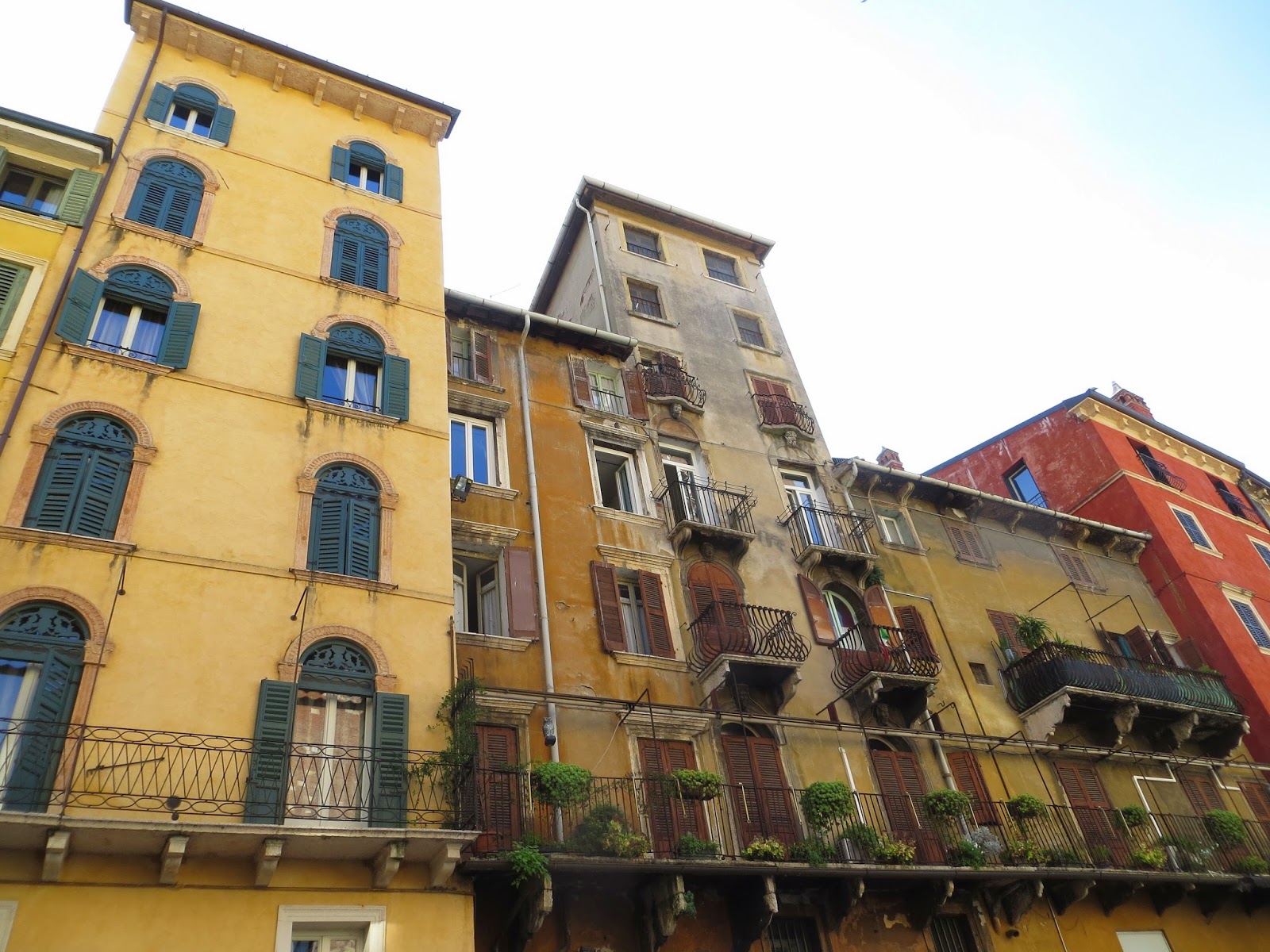 And we eventually found the Arena. 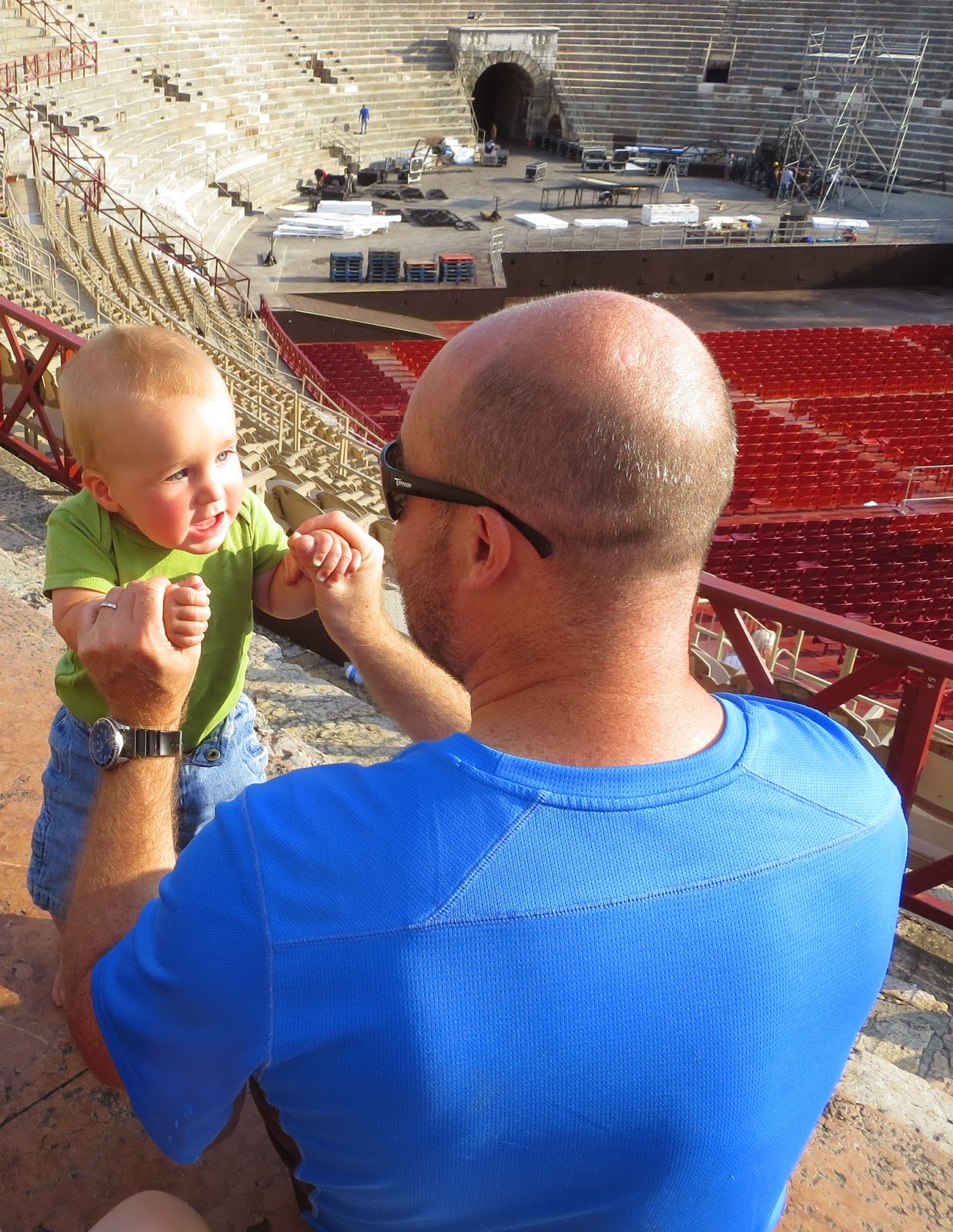 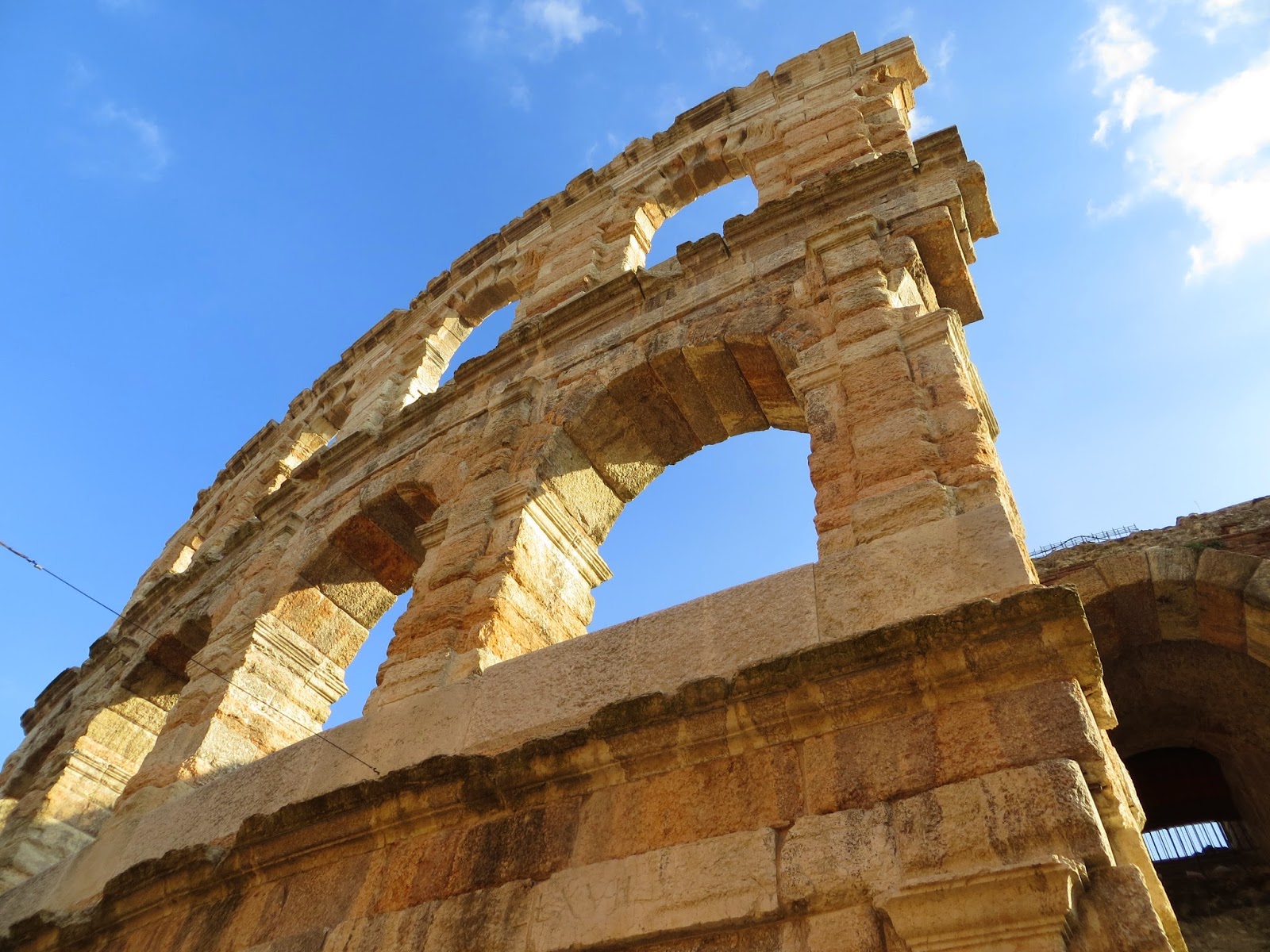 And we discovered one bonus of travelling with children: in Piazza Bra afterwards, we absolutely scandalised some old Italian ladies by putting Theo on his mat on the ground to kick his legs while we ate pizza.  They couldn't take their eyes off him!  When I started a chasing game with Toby afterwards, trying to wipe tomato sauce off his face, they clearly had us marked down as complete lunatics.  I think we made their day.

In the Valle Camonica, the glacial valley leading up from Lake Iseo, there is a UNESCO site containing rock drawings which date back to 6,000 BC.  And there are thousands of them!  Seriously.  Don't you think that's the kind of thing you should somehow have heard about?  Kind of up there with Pompeii and the Parthenon maybe?  Well, I had no idea they existed.  And when we drove up to see a few, we found ourselves bumping along a narrow cobbled street to reach a little village called Nadro.  Leaving the car in the deserted piazza, we entered the small museum, where the staff looked slightly surprised to encounter actual visitors.  The museum displays were in Italian, so we couldn't make much of them, but the signs by the actual engravings were multilingual. 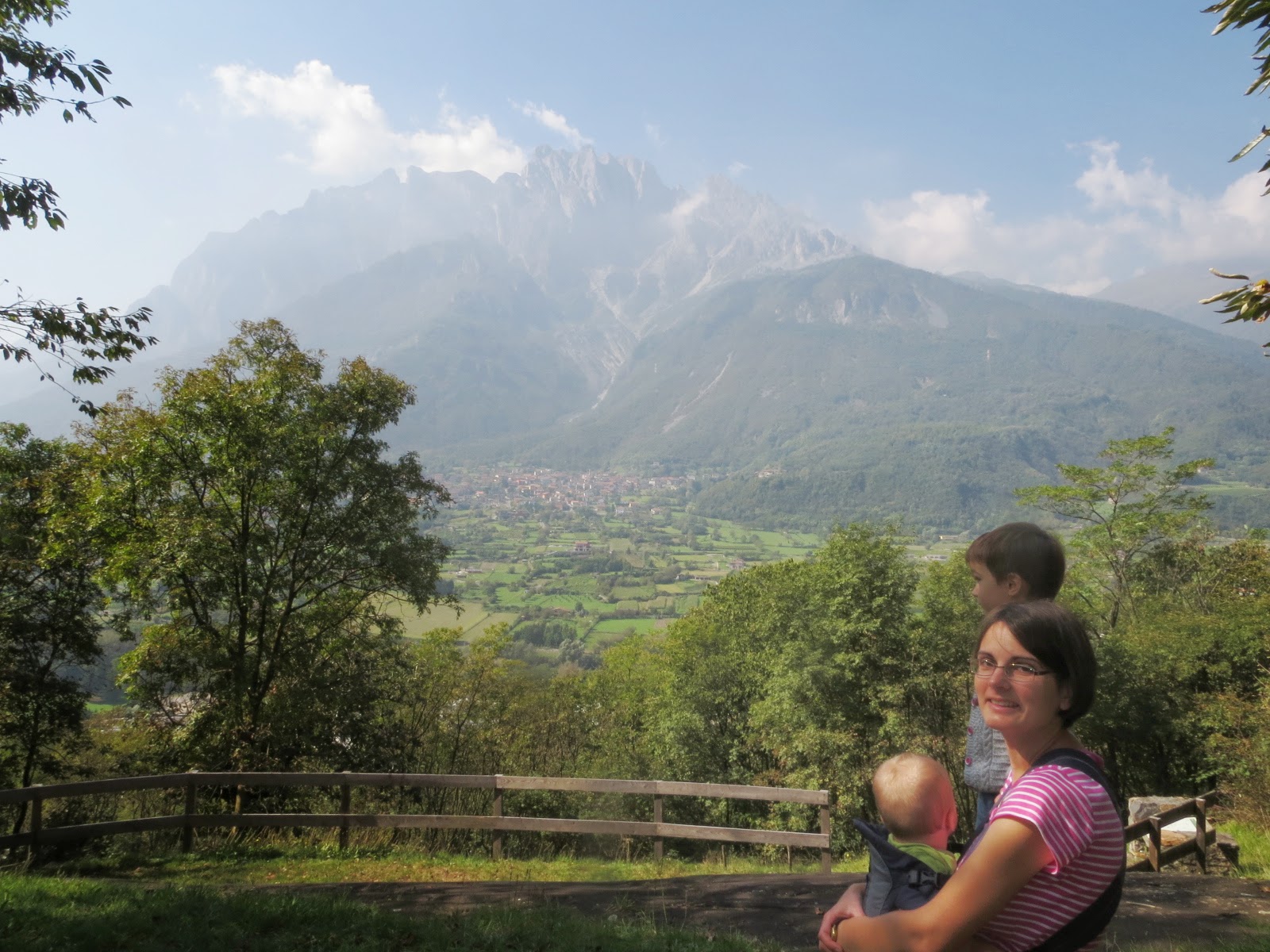 The route took us along the hillside, under the shade of ancient chestnut trees, and round in a loop past huts, flowers, men with spears, crosses, footprints and much more.  A bewildering array of what?  graffiti?  religious art? important messages?  Who knows?  I wondered what we will leave behind to puzzle future generations.  What will they deduce about us, those men and women of five thousand years hence?  What will be left of our lives?

"I'm bored," said Toby.  And we swung one of the ancestors of those future generations down the hill, over the rocks and the rustling leaves, over the evidence of lives unknown, all the way back to the car.