How to have a holiday with small children

October 14, 2014
Go to Italy... it's only a two-hour flight*
Most of the plane journeys I have been on are in the transatlantic, super-jetlag, screw-up-two-days-of-your-life category, so it still feels like a pleasant novelty to board a flight for a mere two hours.  Especially when you have two children who require continuous attention.  This was Theo's first flight; he took to it like a pro, and even charmed some lady in the next row into cuddling him for a while.  Despite travelling "light", we somehow had nine separate items to keep track of (not even including Toby's penguin, turtle and blanket, which I lived in permanent fear of him dropping), but everything made it there and back without incident.


*Valid for residents of UK and certain other countries only.  Your flight time may vary.

Go to Italy... and rent an apartment

Believe me - two bedrooms and a kitchen make life sooo much easier.  Graham found us a great place in the middle of Lovere, where we only had to fall down a few steps to be right in the middle of it all. Once we'd figured out how to use the stovetop espresso maker, we were sorted!  Toby enjoyed his very own bedroom, Theo happily bathed in the kitchen sink, Graham stocked the fridge with a bottle of Limoncello, and I practised my Italian at the teeny-tiny paneficio (bakery) up the street.  And if the boys hadn't woken us up by 7am, the bells did.  No lie-ins in Italy! 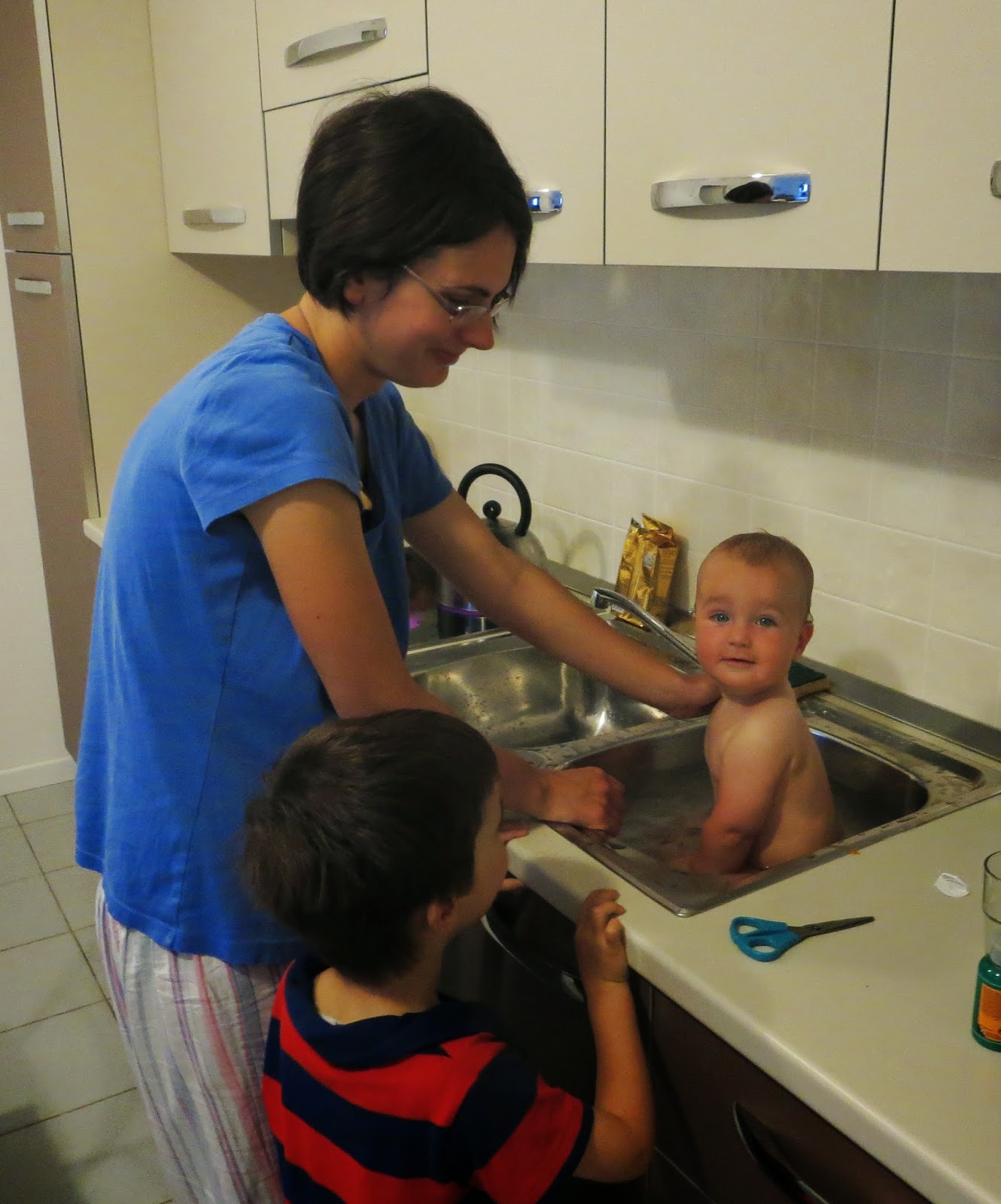 Go to Italy... but eat out for breakfast, not dinner 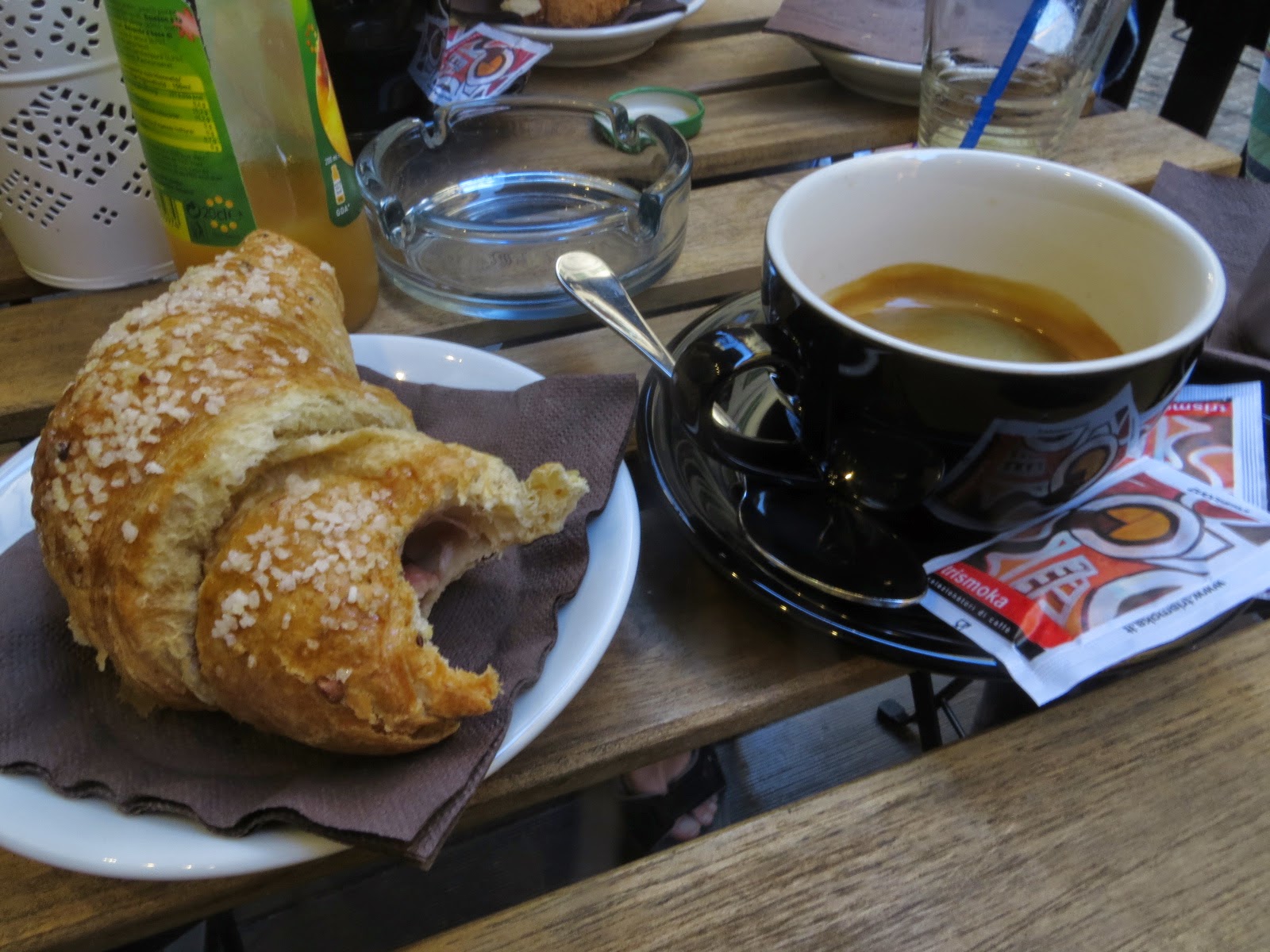 We spent most of the holiday intending to eat out in the evening, but being too exhausted to even contemplate a restaurant once dinnertime arrived.  Apart from one memorable night when we found a pizza place which not only offered about 50 different pizzas, but was also open from 7am to 11pm (whether it sold pizza at 7am, we never found out), our evening meals were mostly pasta, sauce and screaming kids in the apartment.  Italian restaurants generally don't open until 7pm or so, which is not entirely compatible with small-child bedtimes.

However, Italian cafes generally open at 7am, which is compatible with small-child waking up times.  And they offer delicious croissants and cappuccinos for a euro apiece, which seems ridiculously cheap by British standards.  And you get to sit at a table outside and watch life go by on a picturesque medieval street.  Breakfast is the way to go.


Go to Italy... and take a boat to an island
Where small boys are involved, a novel transport option is always a hit.  One of the highlights of the trip was our boat trip to Monte Isola - the mountain island - in the centre of Lake Iseo.  The island is car-free, although the locals' scooters whizzed around at an alarming pace, so it didn't do to relax too much.  Graham walked to the top of the island and admired the view from the Madonna della Ceriola chapel.  The rest of us contented ourselves with climbing - and counting - a mere hundred and thirty steps before retreating to the lakeside for ice cream. 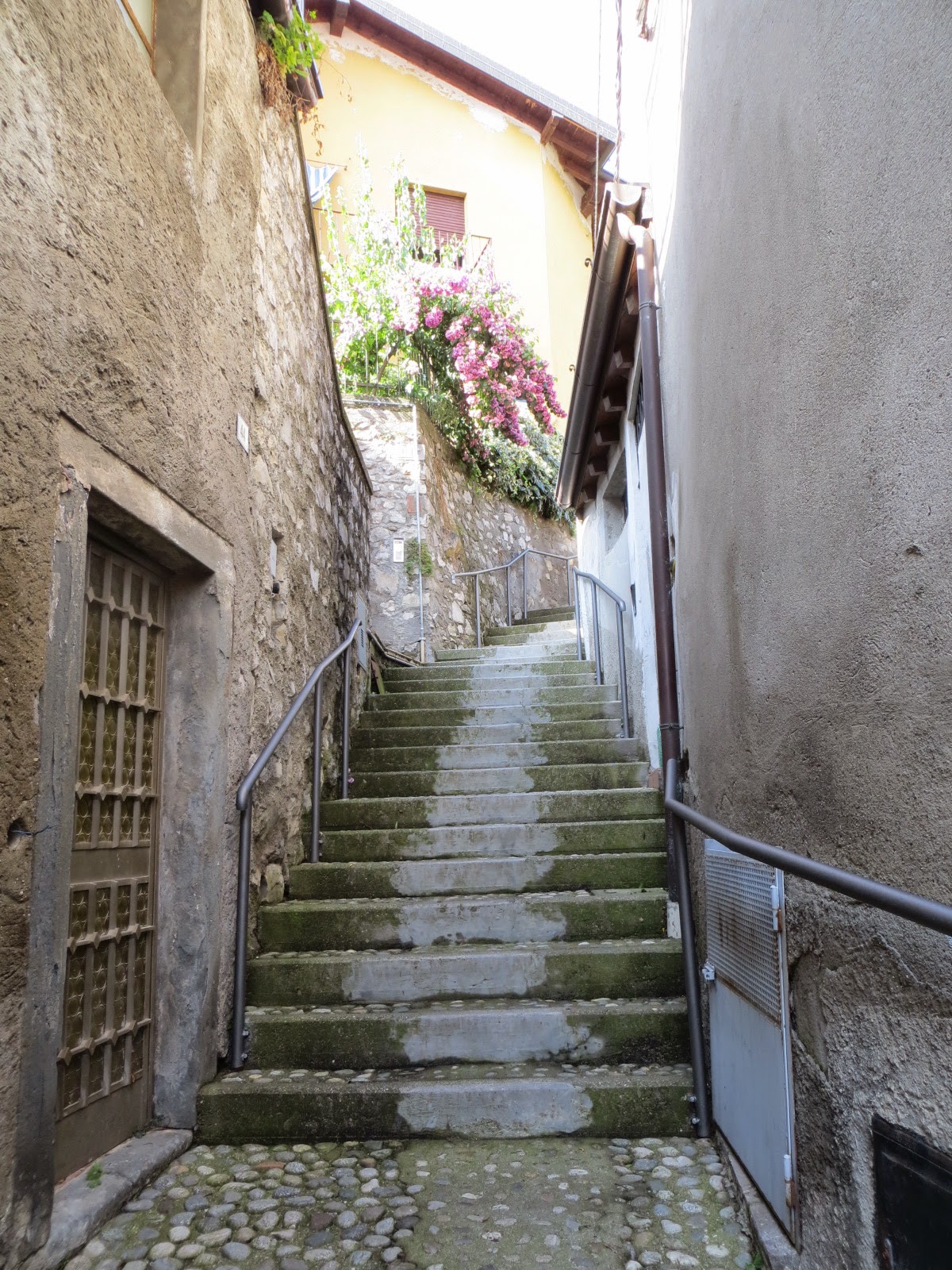 Go to Italy... out of season
On our first day, we followed the road which clings improbably to the rocky western shore of Lake Iseo, ducking through narrow tunnels and swinging around numerous blind bends.  Our destination was the town of Iseo, at the southern end of the lake, and a certain water park we had heard of, called Lido Belvedere.  After panini and perambulations in Iseo, we drove up to the Lido.  Nobody else was there. 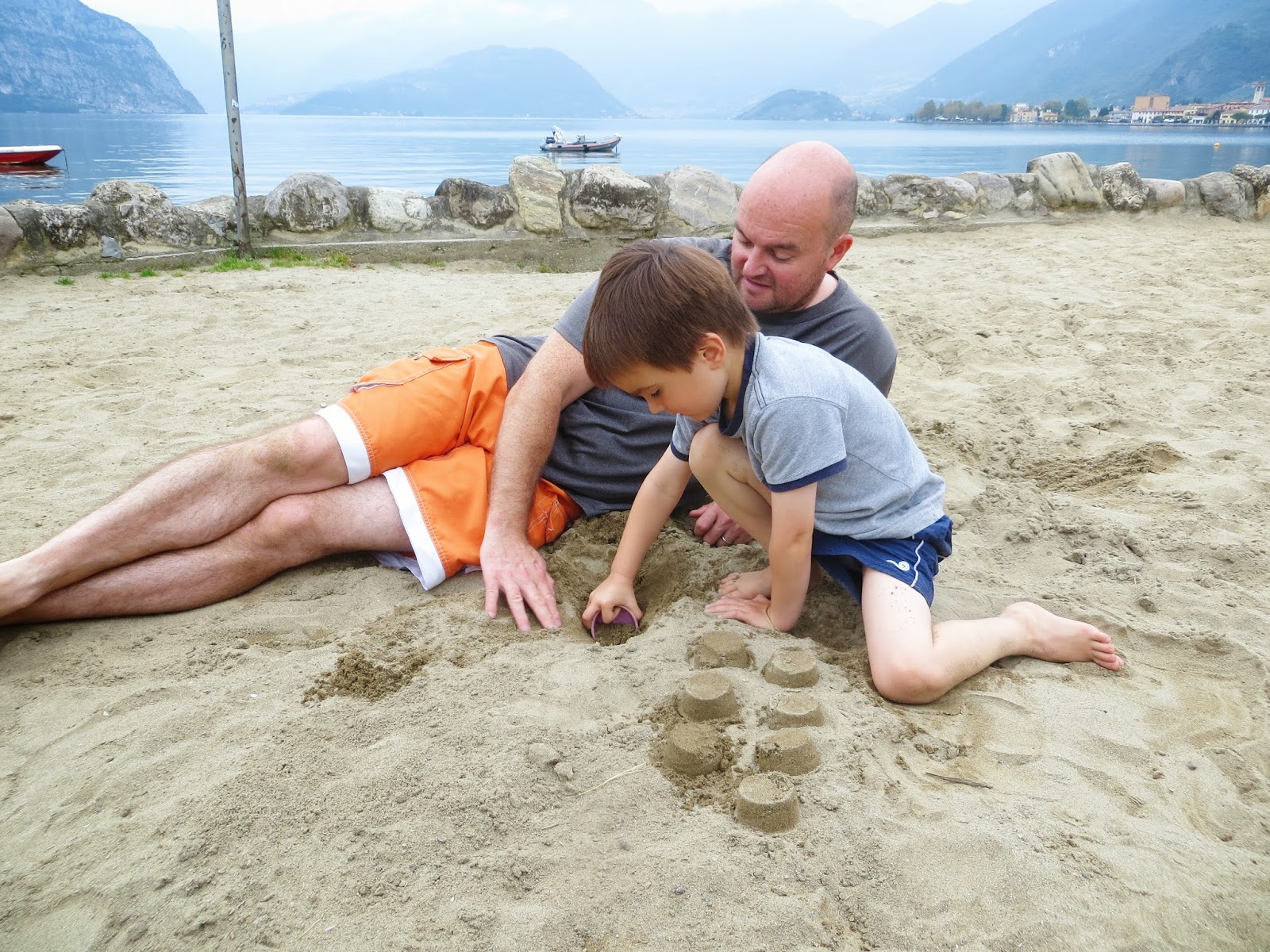 "Aperto?  Open?" I asked a guy lounging on a sofa outside the cafe.  He kind of shrugged.  "Si."  The Italians, he explained, don't swim outside "in the winter".  As a description of mid-September, we thought this somewhat far-fetched, but since it meant we had the entire place to ourselves, we weren't complaining.  We hung out on the strip of beach by the lake, sipped a few beers, and braved the blue unruffled water of the outdoor pool - which was, admittedly, a little chilly. 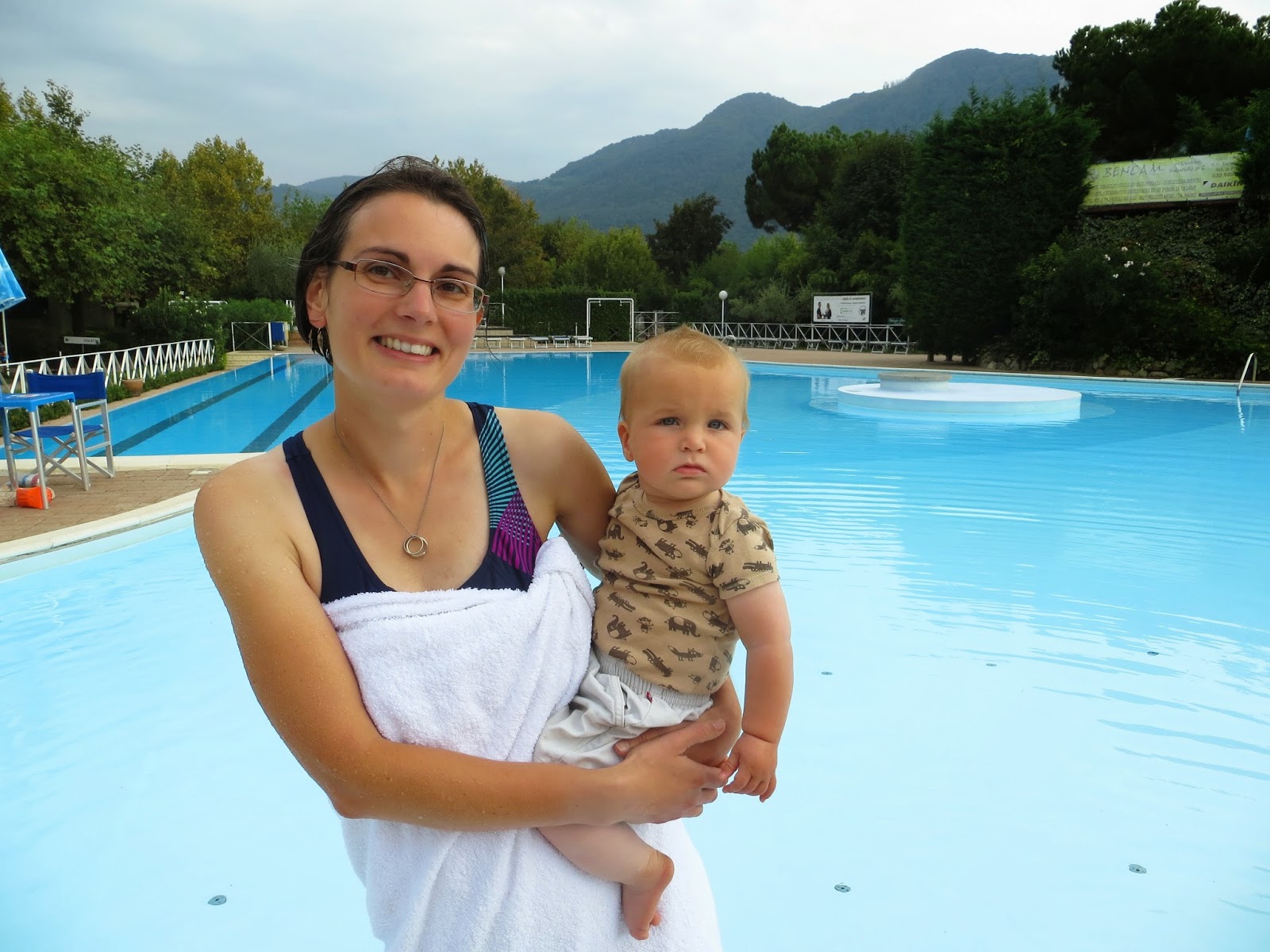 Go to Italy... they have Peppa Pig there, too
I've never been quite sure whether a holiday, for Toby, is worth the pain of being away from his toy car collection.  There is always a joyful reunion when we arrive home.

Entertainment in the inevitable downtime can be a problem when you're away, so Toby was delighted to find an Italian TV channel that showed back-to-back Peppa Pig episodes.  In Italian, obviously, but he's probably memorised all the dialogue by now, so that didn't matter much.  I'd also downloaded some programs from BBC iplayer onto our tablet, which proved useful for long car journeys.  On the whole he and Theo did OK with the limited toy supply, as long as we got out of the apartment reasonably quickly in the mornings.  Much after 9am and tempers would start to fray.

Go to Italy... to enjoy the view from the playground
Wherever you are with children, you end up spending a significant chunk of time at the playground.  But with a view like this, who's complaining? 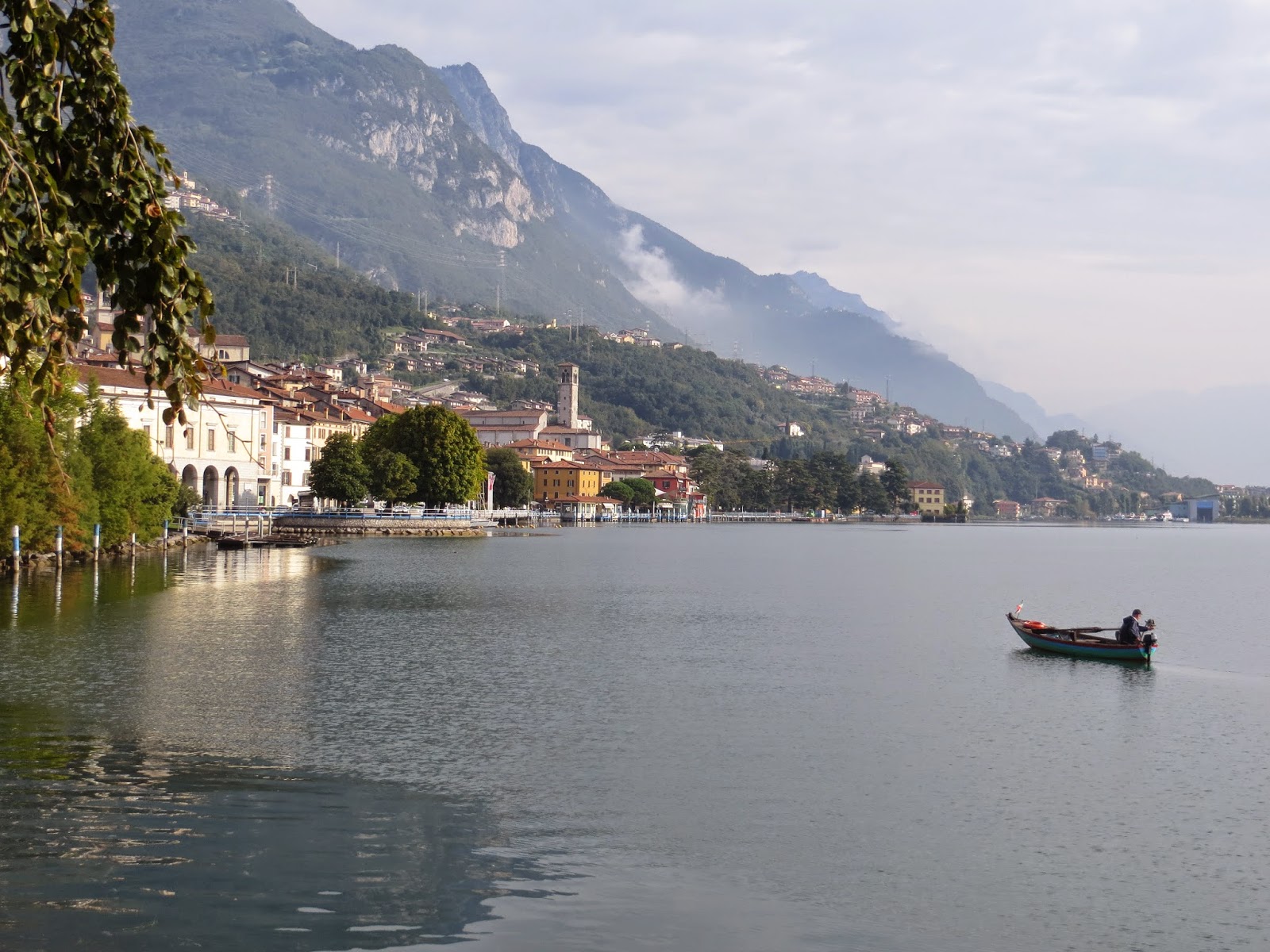 Lovere was just a nice place to potter around.  It has a certain verticality which makes pushchair use rather strenuous (lots of steps!), but there's lots to explore.  We mooched around the marina, wandered the narrow streets, peered into very fashionable shops, and simply watched the shifts of colour and light on the blue-grey water.


Go to Italy... and give each other a break

After frustrating experiences on previous holidays, we decided that Graham and I would each have at least half a day to ourselves on this one.  It's never the day when the children are angels of sweetness and light, of course, but if you get over the guilt and just go, you will feel so much better.  And the one stuck with the kids will survive.  Really.

My half-day was the Sunday morning.  I walked up in the clear morning sunshine, up and up to the Santuario San Giovanni, perched high above Lovere.  By fortunate coincidence it was the annual feast day, so I was able to attend a special service in the chapel.  There was a very cheerful atmosphere. The local equivalent of the Scouts led the upbeat singing; the lady next to me absolutely shot out of her seat in order to be first in line for Mass, and at the end everyone piled outside to eat their picnics on gingham tablecloths.  I didn't hear a word of English spoken the whole time.  It was great.


In the afternoon Graham dropped the boys and me at another local town, Riva di Solto, so we could enjoy a change of scenery while he rented a canoe and paddled across the lake.  He came back extremely wet (no, he didn't fall in!) but happy.  He didn't take a camera, for obvious reasons, so here he is on dry land, with the impressive rock formations between Riva di Solto and Lovere. 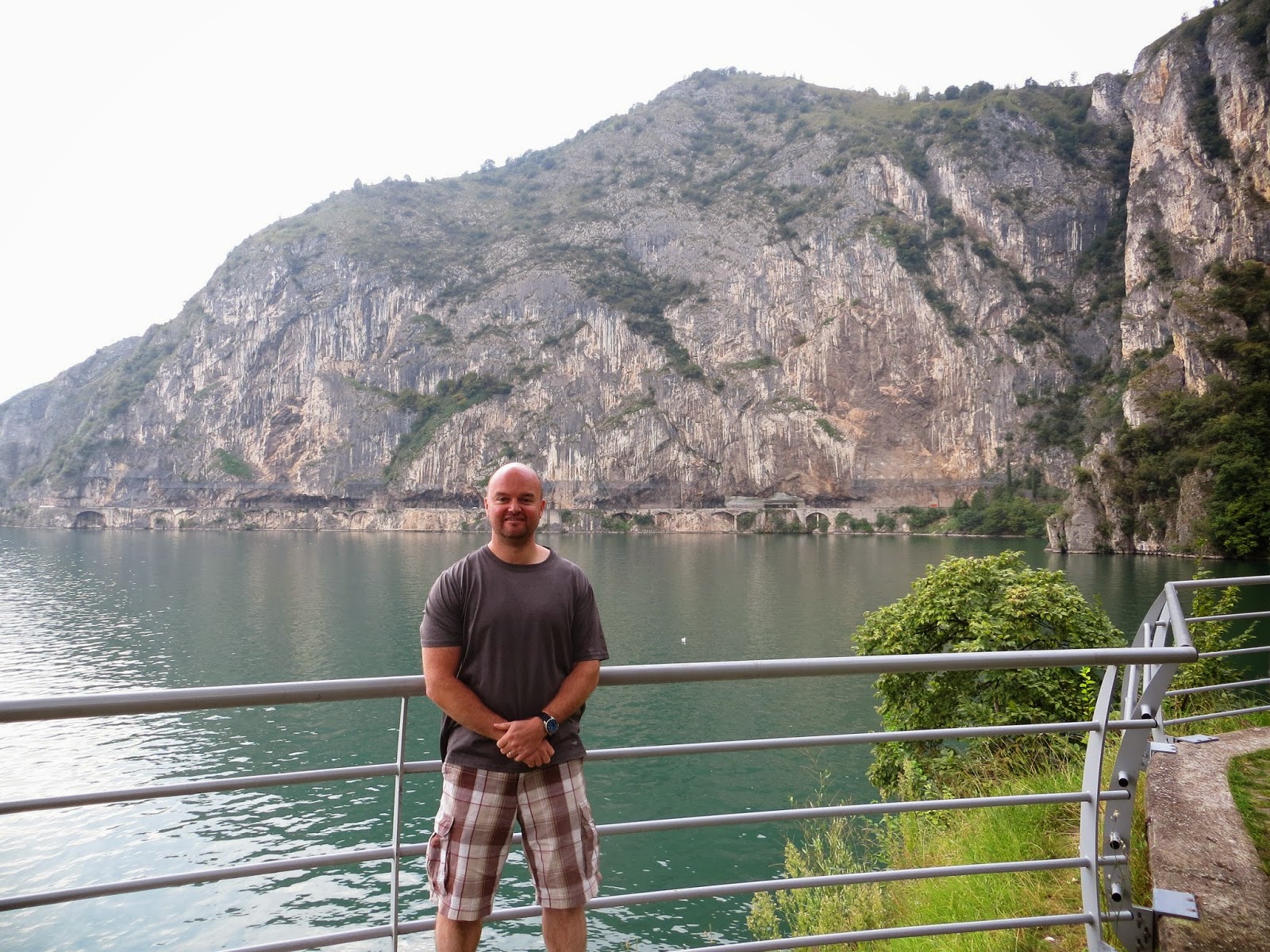 Go to Italy... where you can eat ice cream every day! 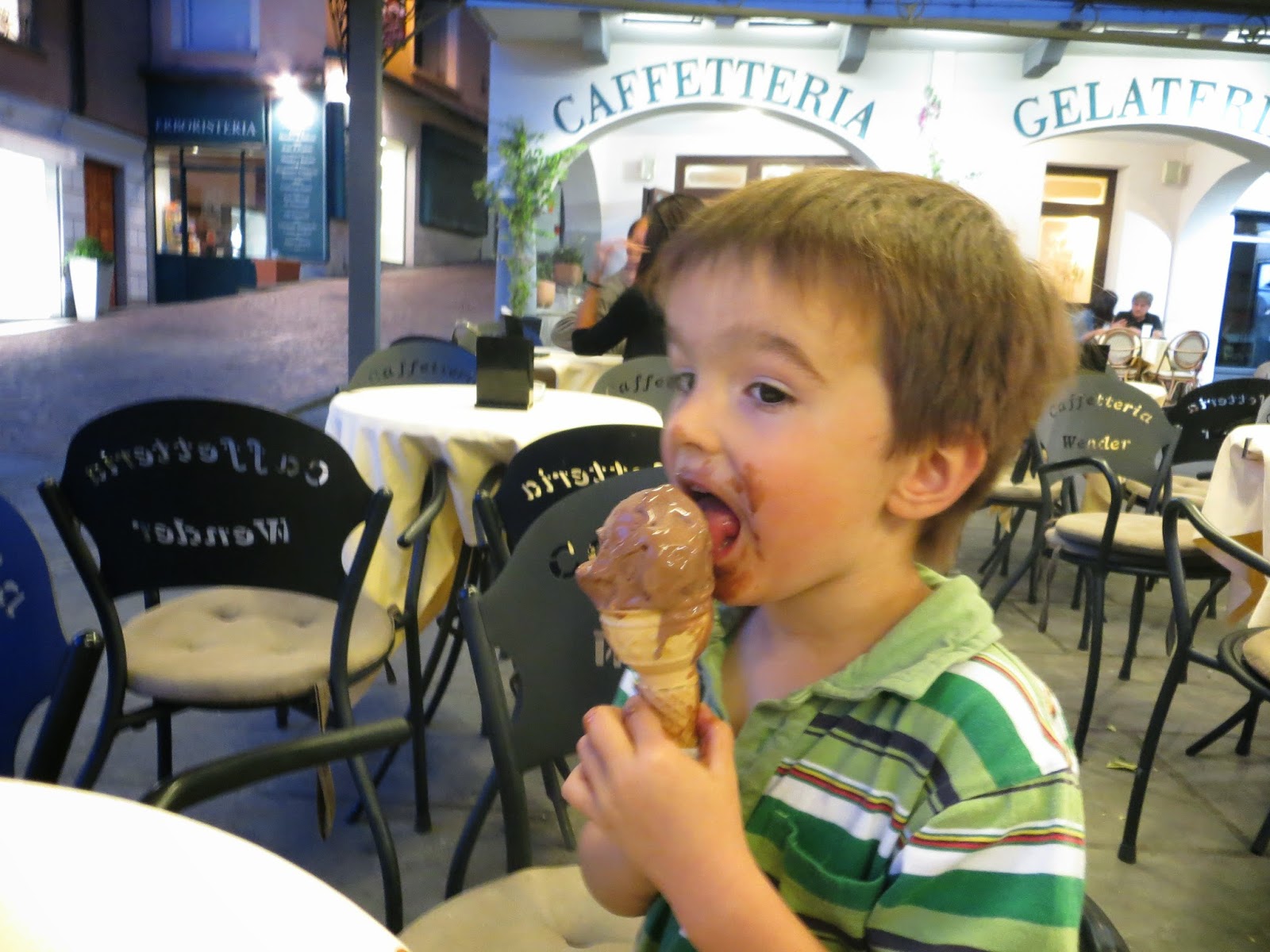 That is not an exaggeration.  Every.  Single.  Day.