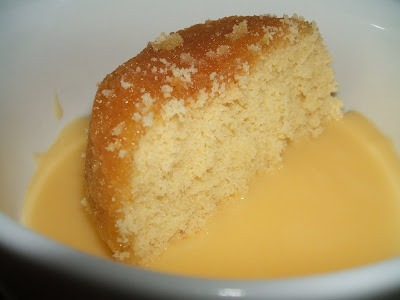 One of the highlights of being in catered halls for a couple of years at university was the sponge puddings. Great big sheets of chocolate or vanilla sponge, carved into hefty blocks and doused with thick custard. The main courses were edible at best, but those puddings would fill you up for a week.

Good solid puddings, whether baked, steamed or boiled, have been a mainstay of English cooking for centuries. Something about the cold, damp, dark winters inspired British cooks to endless variations on suet, jam, currants, custard and other comforting ingredients. Once I left the nurturing environs of my parents' house and university halls, pudding stopped being an everyday affair and became a more haphazard, if-I-feel-like-making-any event. And steamed puddings especially, with their two hours over simmering water, don't really lend themselves to spur of the moment dessert-making.

However, technology has moved on since those first days of puddings. I'd been vaguely aware that you could cook a steamed pudding in the microwave, but only recently tried it. The perfect instant pudding! Two minutes for the pudding, two minutes for custard, and there you have dessert for two. 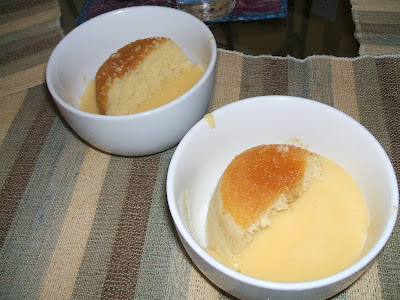 Cream butter and sugar until fluffy. Beat in egg. Stir in flour and milk. Put into a 2-pint pudding basin and cover. Cook on high power 2-5 minutes. Serve hot with custard.

I used a 1-pint basin because that was what I had, and it worked fine. Or a Pyrex bowl would work too. I also put 2 tbsp golden syrup at the bottom of the basin, and you can put jam at the bottom or mix in raisins or chocolate chips or ginger - endless variations.

marisa8675 said…
I'm so confused with British pudding/custard. Pudding in the U.S. is not cake-like at all. I must try this...it looks so tasty, but hearing the term pudding confuses me!

Like my jello confusion. I asked Paul (british hubby) to make Roma a peanut butter and jelly sandwich for school. The next day I had about 10 teachers come up to me (facebook, email, etc.) and ask if making a peanut butter and jello sandwich is a British thing. No-its not, and my poor daughter got stuck eating a horrible sandwich because of our communication breakdown over jelly/jello & jam!
11 May 2011 at 10:14

John Evens said…
You rate steamed pudding as a highlight? Generally me experience of institutional steamed puddings did not make the highlights list... Still, I will be having Kristal try this recipe!
11 May 2011 at 16:37