No, in the brave new world of babies' bottoms, CD stands for Cloth Diaper. And that's not the last piece of jargon you'll encounter on the subject by any means. It took me a good few hours of reading to get my head around all the different types, and I've come across several parents who have toyed with the idea and got put off. Which is a shame, because there are all sorts of good reasons not to use disposables, and the actual practice of cloth diapering is not hard at all. So I wanted to share some of my experience so far. Come delve with me into the mysterious underworld (or should that be underwear?) that is cloth diapering. 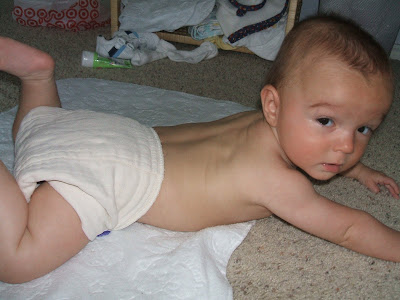 OK. Where to start? Most stuff you read tells you that prefolds are the basics, the ones every cloth diapering mum has. So we got some prefolds. These sound like they ought to be shaped ready to fit around your baby's darling derriere, right? Actually they're the updated version of those terry squares - basically a rectangle of cotton which is folded and sewn so as to be thicker in the middle for better absorbency. To add to a novice's confusion, they have to be washed and dried multiple times before you can use them, and there are half a dozen different ways to fold the dratted things. Armed with this amazing folding guide and a Snappi (the modern mum's equivalent to nappy pins) we removed Toby from his super-absorbent, never-feel-wet disposable nappy and equipped him with his beautiful eco-friendly prefold. An hour later our dear little boy was sitting in a mass of soggy material screaming his head off. Yes, cotton gets wet when you pee on it. Rather obvious, really, but a bit of a shock after all those disposables. 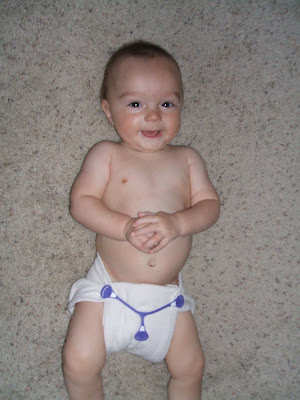 You will be getting the idea that I don't recommend starting out with prefolds. You will be right. Actually now that we've figured them out, prefolds actually are one of the mainstays of our collection (or stash, in true CD lingo). Two square feet of cotton plus a waterproof cover is pretty much bombproof, and we are both slick with a Snappi these days. Also, they're dirt cheap. But for ease of use and lack of sogginess, there are other options. 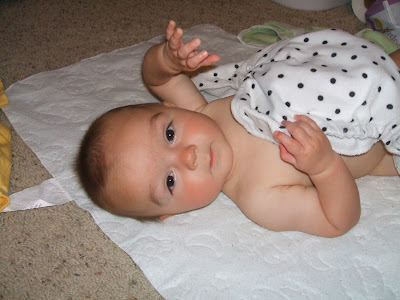 They make good toys, too!

This is where the jargon comes in. There are all-in-ones, abbreviated to AIOs, which are about the most self-explanatory. Absorbent bit plus waterproof cover all in one, just like a disposable but made of cloth. Wrap it round your baby, secure with velcro, wash the whole thing. Easy. We don't have any. This is mostly because we started with cloth diapers when Toby was too small for most brands of AIOs, so I got into other things and never used them. Also they are about $20 apiece, which adds up quick when you're using 8 nappies a day.

Then there are all-in-twos (AI2s) which are something like all-in-ones but different. Don't ask me, I never did quite work out what they were. I'm sure some people use them.

Also, there are fitteds, which is what you think a prefold ought to be. That is, it's a piece of fabric which is shaped to fit around a bottom, and may also have velcro or similar to keep it there. But you need a waterproof cover to go over the top. I would rather like to try fitted diapers, but they're a lot more expensive than prefolds and basically do the same thing. Apparently they're very easy to make for people who are gifted with sewing skills. I'm not, so I stick to buying them. 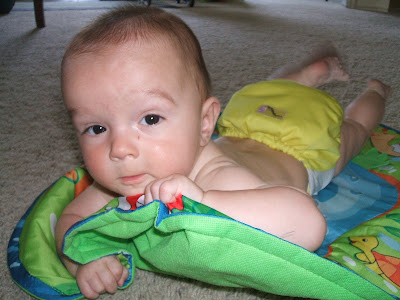 Toby in a Rumparooz pocket diaper

And then there are pockets, which we do use. We started with Rumparooz brand, which are good at fitting tiny babies, and then branched out into Kawaii, which are nice and cheap and look good too. Basically pocket diapers are a waterproof cover sewed to a stay-dry lining. They have an opening at the back so you can stuff strips of cloth between the cover and the lining, which provide the absorbency. The beauty of them is that you can stuff them with as much as you need to keep the baby dry, and they wash and dry quickly because you wash the cover and the inserts separately. Most of them are one-size, too, so they adjust to fit all the way from baby right up to (theoretically) toddler. Having only got up to six months, I can't guarantee the toddler part - it'll be interesting to see how they do. 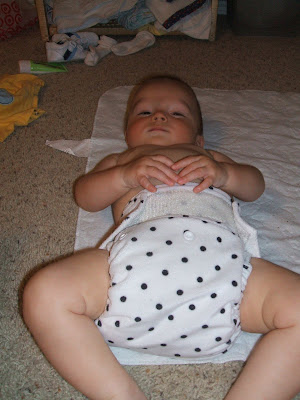 That just about covers the diapers. But what about the washing??? I read about all sorts of complicated methods of washing diapers, but so far I've kept it simple. We have *counts on fingers* 12 prefolds with 3 covers, 5 Rumparooz and 8 Kawaiis right now, so a couple of dozen nappies altogether. I find myself washing them about every three days, and I just do a cold pre-wash with no soap, hot wash with one of those green, no-additive detergents, and extra rinse. Then I hang them out in the Texas sun, which bleaches any stains out wonderfully. I have to admit, having near-constant sunshine does make life easier; everything dries in under three hours rather than three days. But on the whole, the washing hasn't been much extra stress at all. 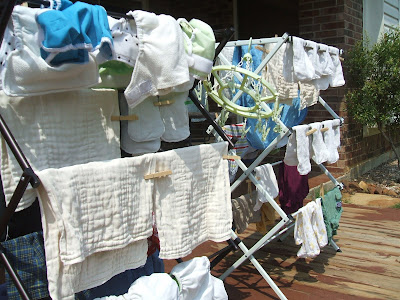 Diapers drying in the Texas sunshine

What else do you need to know? Disposable diapers clog up landfill, contain nasty chemicals and cost a lot of money over two-three years. Cloth diapers cost less overall, are better for the environment and nicer to your baby's skin. Also they look cute. And they work. We've had some leaks, but we spent a month in England with Toby in disposables, and he leaked out of those sometimes too. And finally, it's not an all-or-nothing event. Several stores do trial packs so you can try different sorts for a month, or you can just buy a couple to start with and work them into your routine. I have been accused of bravery, but it doesn't really take much - no one's going to make you vow never to touch a disposable again! We've always had a packet in the house, just as backup or for babysitters.

Oops. I will get off my hobbyhorse now and stop trying to convince all you people who a) already use cloth; b) got your babies out of diapers years ago or c) wish parenthood wouldn't make perfectly sensible people wax lyrical about babies' bottoms. If you want to know more, my go-to site is All About Cloth Diapers. And that's my last word on the subject.