January 14, 2010
With a little judicious (dis)organisation, we somehow managed to see most of the people we wanted to in our two-week UK visit. Being Christmas, we concentrated on spending time with family, but fitted in a few friends as well.

So, Mom and Dad hosted us for Christmas. The chief photographer was obviously neglecting his duties in favour of opening presents, as I don't seem to have any photos of the happy occasion. On Boxing Day, though, he really went to town. Or should that be Town? The four of us paid a visit to London, and I was constantly afraid of losing Graham amongst the thronging crowds on the South Bank, as he paused to capture yet another view on camera. It has to be said he got some nice shots, though. We went with the intention of riding the London Eye, which unfortunately was closed for repairs. So we got our birds-eye view - and some exercise - by climbing the dome at St Paul's. They charge you a fair whack to get in, but it's worth it. Really. 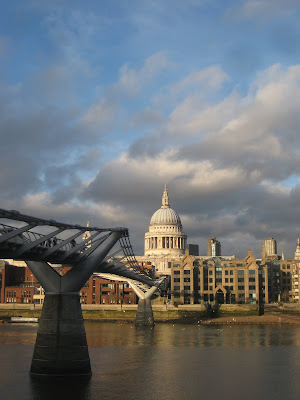 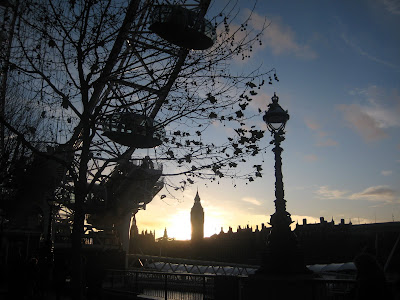 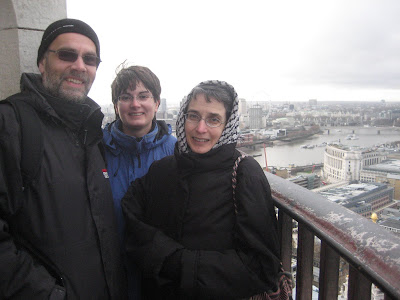 Dad, me and Mom at St Paul's
The next day we slogged up the M1 to Nottinghamshire, fabled home of Robin Hood and certain members of my family. We spent a happy afternoon visiting with my aunt and a couple of my cousins. One of whom has coincidentally married a Texan and had three gorgeous girls, who were very pleased to let these strange new relatives build marble runs and throw balloons around with them.

Todmorden means Graham's family, of course, and we were welcomed with open arms and offered a brew before we'd got both feet across the threshold! We opened a few more gifts (funny, I haven't got any photos of that, either) and made some cautious ventures out into the icy countryside. 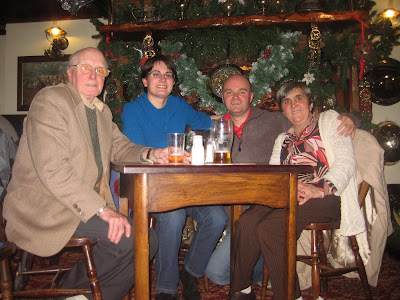 Us with Graham's parents at nice Christmassy pub
We spent New Year in the Peak District with Graham's sister and cousin, and a bunch of other people who've been meeting up for New Year since time immemorial. They kindly let us gatecrash for a couple of days and join in board games, quizzes and the obligatory rendering of Auld Lang Syne. 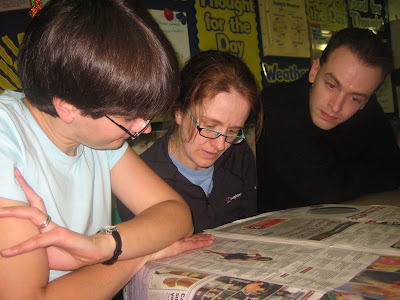 Tackling the Telegraph 2009 quiz with Graham's sister and cousin 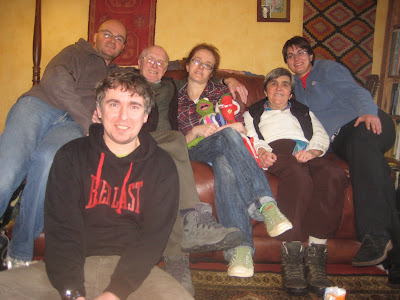 Sliding down south again, we made a brief stop in Kenilworth for a context-confusing visit to some friends we met in Fort Worth. In Bristol we somehow managed to round up about 15 people for a curry at a moment's notice - thanks for coming out, guys! We enjoyed seeing you! I also walked into a staff meeting at Cairns Road and was greeted as if I'd never left. Had we stayed ten minutes longer I would have had three jobs to do and never left again!

However, we surfed back to Reading on the wave of an incoming snowstorm, which subsequently broke in dramatic fashion and almost prevented us from leaving as well. We wouldn't have objected to a few days more, but on the whole it was probably best that we got the flight.