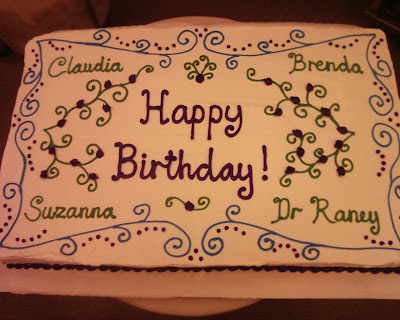 The customer gave me a free rein on this one; as I recall they wanted the "Happy Birthday" and the four names in the corners, and then said, "make it look pretty". So I went for a vaguely mediaeval look. It would have been nice to been able to plan it out on paper first, but I like the general effect. 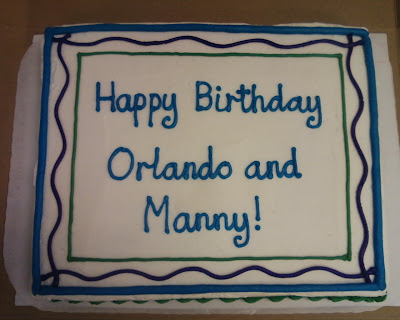 Nothing super-spectacular here, but I had to get a photo because it came out so perfect! When the icing consistency isn't just right you get airbubbles, lumps or squiggles, but for once all the lines were beautifully smooth. 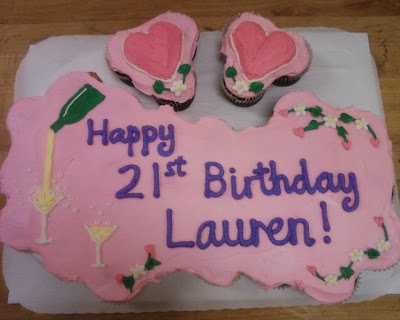 This design was adapted from one in the book we had at work, but the champagne bottle was all my own work. Adds a touch of sophistication to what would otherwise be a little girl's cake. 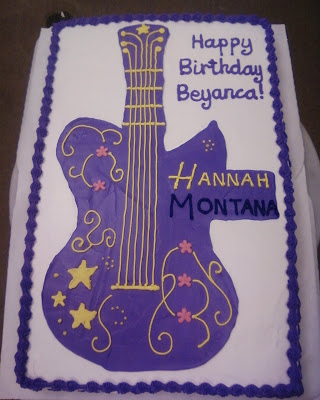 This was a big cake - a full sheet, which is something like 13" x 21". Hannah Montana had been a popular design for a while but this lady wanted something different to our regular design. As I recall we had about five separate conversations about the cake, but she was happy with the end result. 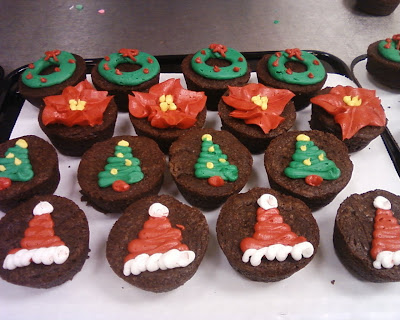 These little things are brownie bites. The store used to just sell them ready-packaged, undecorated, but then some bright spark got the idea of decorating them in TCU colours (the local college) for their football game. It was the biggest game they'd played in a while and we sold hundreds. And then it was Christmas. I had fun at first, coming up with cute Christmas designs, but believe me, the magic wears off after the first thousand or so.