January 26, 2010
The horseshoe of seats in the auditorium was already three-quarters filled and humming with anticipation. As we slid into vacant chairs, the band struck up a spirited rendition of "Amazing Grace". To the tune of "Ghost Riders in the Sky". Yippee-ai-ay! 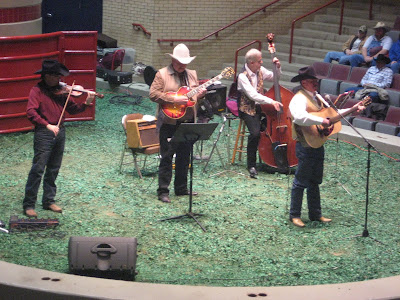 The last guitar chords settled into silence. The guitarist, a man with a stiff grey moustache, said, "Let us pray." There was an instant flurry of movement as dozens of cowboy hats were removed and held respectfully in laps. Once the prayer was over they were resumed, although a few were later used as collection baskets for the offering.


After a few more country 'n' worship songs, the preacher stood up to speak. For 22 years, he said, the Shepherds Valley Church had been praying that there would be a Christian service at the Fort Worth Stock Show, yet the organisers had been against it. All that time they had been making friends, cultivating connections, and finally somebody recommended that, since all the other stock shows had a church service, perhaps Fort Worth should too. 22 years of prayer and work had paid off; yet the church still wasn't insensitively triumphalistic. Instead, they bought 200 rodeo tickets to support the event. I was reminded of Jesus' parable of the shrewd servant in Luke 16, and his comment: "Make friends for yourselves by means of unrighteous mammon..."


In his late 50's, with a weatherbeaten face and well-worn cowboy boots, the preacher went on to speak about attitude. It's easy to have a good attitude when things are ticking along as usual, he said. When you suddenly face unexpected prosperity or unmerited persecution, that's when your attitude really gets tested. And attitude, over time, adds up to disposition. Have you ever had an animal who just had a bad disposition, he asked. About half of the audience raised their hands.


Finally, the pastor led the congregation in a prayer to receive Jesus as Saviour, should anyone have not done so already. The blue-jeaned band rematerialised to sing a final song about finding God in the open prairie and the face of baby calves. And we wandered out into the bright farmyard-smelling sunlight with the faint strains of "yippee-ai-ayyy..." ringing in our ears. 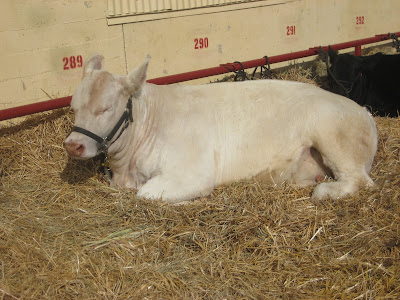