A visit from the parents

April 24, 2009
I suppose it must be some kind of growing-up rite: the first time your parents come to stay with you, rather than you descending on them, hoping for some home-cooking and maybe a few clean clothes. Apart from a brief overnight stay in Bristol, this was the first time that I was entertaining Mom and Dad in my own home - and the first time for Graham entertaining his in-laws! All four of us had a really good time.
This will be a brief photo tour as much as anything, because we managed to cram a lot of stuff into a mere week. Most of the places that we went to have had previous entries on this blog, anyway, so if you want more pictures of the scenery you can always browse backwards till you find what you're looking for.
The first couple of days Graham and I had to work, but Mom and Dad walked to the Botanic Gardens and Modern Art Museum and along the Trinity trails. I had the morning off one day so took them into downtown to see the water gardens and other sights - here's Mom and Dad at one of the water features there. 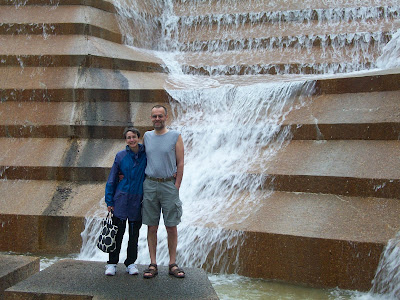 On Good Friday we went to Granbury, which has a well-preserved town square with some interesting shops, and then on to Dinosaur Valley State Park. It has the obvious attraction of real dinosaur footprints and quite a lot else to recommend it as well - a pretty river, an extensive network of trails through woods and streams, and some preserved prairie. 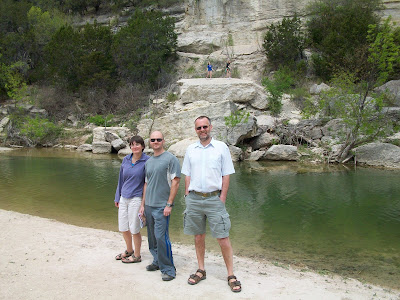 By the Paluxy River 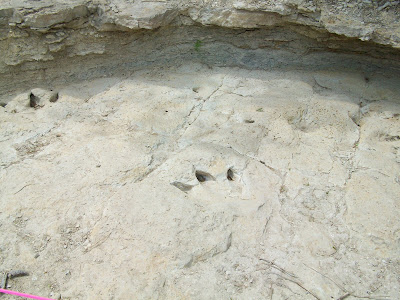 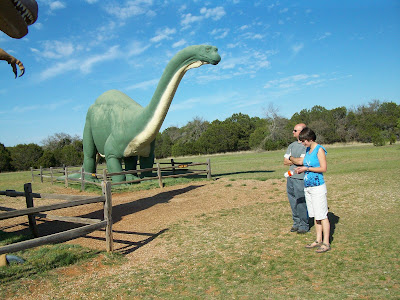 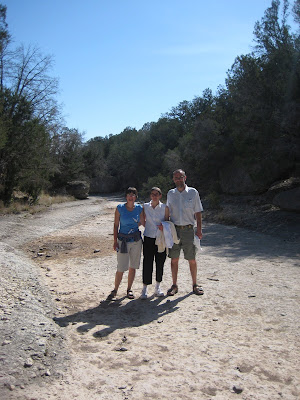 Out on the trails - in a dried-up creek bed

Graham took Dad on a tour of the American Airlines workshop on Saturday; Mom and I, being somewhat less interested in dismantled aeroplane parts, stayed at home and made hot cross buns. In the afternoon we did the obligatory tour of the stockyards, complete with "cattle drive" of half a dozen sleepy-looking longhorns with almost as many cowboys to accompany them.

In the evening we went to a production of the Easter story by Travis Avenue Baptist Church. They'd rented a fairly large auditorium and it was a really spectacular production - a full-on musical with a cast of about 100, all written and produced by the church. The following morning we went to one of the three Easter morning services at St Andrews Episcopal Church, which was almost as spectacular in a rather different way - robed choir singing choral arrangements of the Easter liturgy, and excerpts from Handel's Messiah. It's still hard to get over just how many resources the churches here have.

We did an overnight trip to Caddo Lake, after some debate about whether to go or not because it was raining (raining? in Texas???). It was semi-sunny and just about the right temperature for canoeing, however, and we had the lake pretty much to ourselves as we meandered around between the cypress trees and spanish moss. 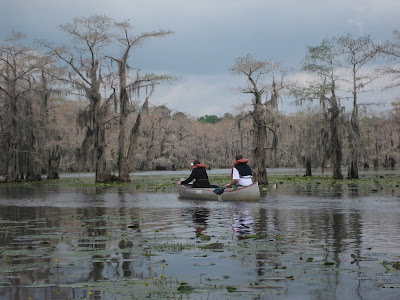 Coming home we drove past several Sonics ("America's Drive-In"), which concept intrigued Dad somewhat, so we stopped to try one. Basically you drive into a bay where there's a menu posted on a board. You choose what you want then press an intercom button to order, pay by slotting your card into the appropriate place, and a few minutes later a girl comes along with a tray holding your drinks. Personally, on a long car journey, I'd rather get out of the vehicle for a bit, but it's always interesting to engage with another little bit of the American culture.

On Tuesday Mom, Dad and I took the TRE to Dallas, and saw some of the sights there, including the bronze longhorns (which looked a lot more lively than their flesh-and-blood cousins in the stockyards!), the JFK memorial, the McKinney trolley (restored tram), and the Thanksgiving Chapel, which has a spiral roof inlaid with beautiful stained glass. This is Mom and Dad at the JFK memorial. 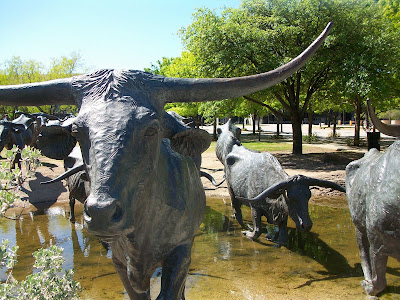 And some of the longhorns.
Mom and Dad enjoyed seeing where we live and what we do, and we enjoyed showing them around our new little bit of the world.
PS Our washing up is missing you - come back soon!