April 24, 2009
Know what these words mean? No? Well, nor did I till we went to the Japanese Festival last Sunday at the Fort Worth Botanic Gardens. They're both musical instruments, and we heard them played by some very talented people in a spectacularly beautiful setting.

The koto is a long stringed instrument, which can have 13, 17 or even 22 strings. Fumiko Coburn, a dainty lady with halting English but a great sense of humour, has the 13 string version. 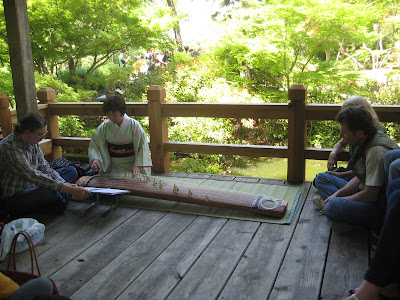 As we watched, she tuned it up by inserting wooden bridges under each string, and adjusting them carefully to give the right pitch for each song. She explained that most of the older tunes for koto included a song, whereas the new ones were mostly for koto solo. It was interesting to hear the difference as she played a piece from 400 years ago and one from 4 years ago. In the older tune, the notes dropped singly into the silence, scattered across time and pitch. Like brush strokes in a Japanese painting, each note had its own place and importance. Fumiko used her right hand, with three plectrums attached to her thumb and first two fingers, to pluck the strings, and her left hand to adjust the pitch of certain notes by pressing down on the string above the bridge. 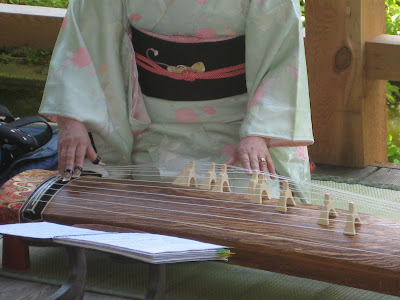 The newer piece had more of a western influence; it was faster and more harmonic. Fumiko's left hand plucked some of the lower strings to create chords below the tune played by the right hand. 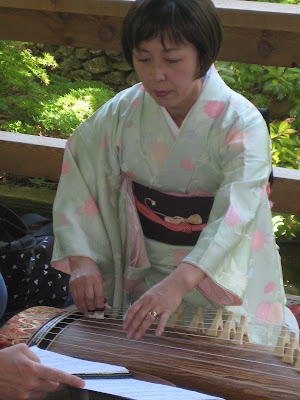 The scales and rhythms still sounded exotic to western ears. She told us that it's impossible to play western-style music on a 13-string koto; it simply doesn't have enough notes. A 22-string instrument is able to produce all the necessary tones and semi-tones. 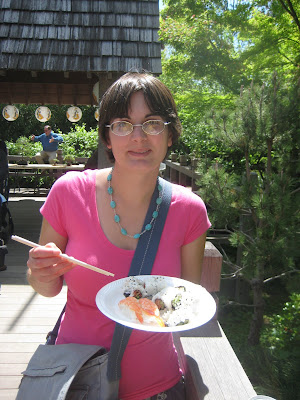 We ate some sushi and wandered over to see the Dondoko Taiko Drummers. There's your second word: the taiko is a large Japanese drum. The drumming group had about ten, of various sizes and shapes, and when they were all played together the noise thrummed through your body and reverberated around the garden. 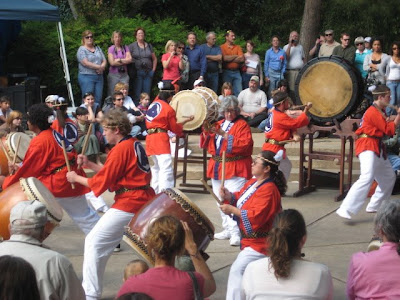 It was a feast for the eyes as well as the ears; the drummers wore bright outfits and drummed as if they were dancing. Sometimes three men would rotate around a single drum or a pair of drums, each beating a few strokes before the next took their place. 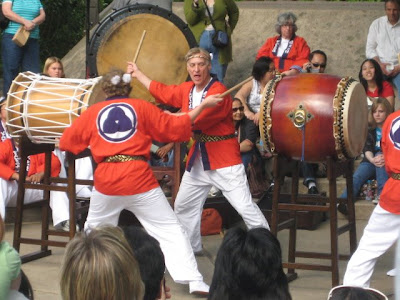 They crouched, stood tall, and threw their arms up to create strong poses. Some pieces were interspersed with shouts, too. 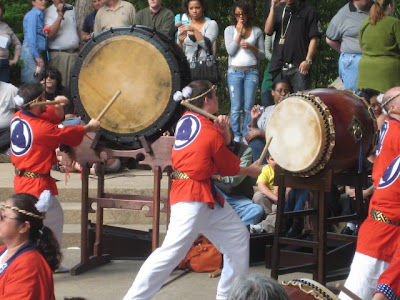 Well, there's your Japanese lesson for the day. If you ever get the chance to hear the koto or taiko played, go for it - they're well worth hearing!