"Everything visible, without exception, is the outpouring of God. What else could it really be? "Christ" is a word for the Primordial Template ("Logos") through whom "all things came into being, and not one thing had its being except through him" (John 1:3)" 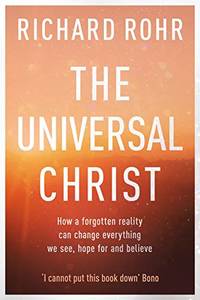 In recent years many Christians have shifted away from a faith which demands that you believe certain definite things, exclude certain definite people, and follow certain definite rules. They have moved - they hope - to a faith which is more comfortable with mystery, fuzzy edges, and a wider variety of practice and personal experience. In these circles, Richard Rohr is a name that is often held in high regard. I would regard my own faith as having moved in this kind of direction, so when I selected The Universal Christ by Richard Rohr as one of my spiritual formation books, I expected to be inspired and enlightened.

I found his writing unclear, and while I sort of agreed with some of his ideas, many of them made me say, "Yes, but..." or "Yes, and..?" His central thesis, captured in the quote above, has obviously been exciting and life-changing for Rohr, but it didn't have the same effect on me at all.

I read a review of another of Rohr's books, written by someone who had some of the same issues with him that I did. That review finishes by warning readers not to trust Rohr or anyone who recommends him! The idea behind reading for spiritual formation, though, is that you can learn something even from authors you disagree with. Certainly trying to work out exactly where I disagreed, and why, was an interesting exercise. So I finished the book (phew!) and here we go.

Rohr's main theme is that Jesus is the name of God-become-man, the actual human person, but Christ is the word for God's universal incarnation in the whole of creation, throughout history, of which Jesus is a specific part. He sees Jesus' death and resurrection as an actual event, but also a model for all of existence - "reality has a cruciform pattern". He is big on God being part of all matter, and therefore an indivisible part of us as humans. And he sees the "Christ Mystery" as being much bigger than any one religion or cultural form.

Well, I generally agree with the idea that God is involved in and redeeming the whole of creation, not just the human part. An environmental Bible study I did a few years ago looked at this concept. It's a necessary counterpoint to the very individualistic idea of salvation, and as Rohr says, it gives us a bigger picture of who God is. My understanding of it is somewhat different to his, and I'm still trying to pick apart exactly how. More on that below.
I also like the emphasis on growing and learning about God. He quotes Pierre Teilhard de Chardin: "God does not offer Himself... as a thing all complete and ready to be embraced. Tor us, He is eternal discovery and eternal growth." Later, Rohr says that Jesus' parables about the kingdom are "almost always about finding, discovering, being surprised". That's what makes faith interesting, for me.

I often found it difficult to understand exactly what Rohr was trying to say. The Universal Christ often includes statements like, "If divine incarnation has any truth to it, then resurrection is a foregone conclusion"; "reality has a cruciform pattern"; "if matter is inhabited by God, then matter is somehow eternal" which I struggled to interpret. Does he mean this? or this? Why does he feel he can make that statement? He's not very good at explaining how he got to where he is.
Rohr does this even with his main idea, that Christ is a word for God-in-creation. He starts by saying Christ isn't just Jesus' last name. Well no, it never was. It's the Greek term for the Jewish "messiah", but he never explores that specific meaning and explains why he is now using it differently. He just says, "We have named this transcendent reality the Christ Mystery." I would have been interested to understand how he moved from one understanding of "Christ" to another.
I would also hazard a guess that Rohr is not a scientist, although he occasionally uses scientific analogies to back up his ideas. The most jarring example of this was when he says, "modern science now makes [resurrection] apparent", but he then talks about landscapes eroding over time, and water changing states from solid to liquid to gas. I can't see how you could feasibly describe either process as resurrection.

I learned that the concept of God being in his creation is more complicated than I'd previously thought.
While I was reading this book, a cat sat on my lap. I was staying at Launde Abbey for the weekend, and I was sitting in the beautiful gardens in the morning sunshine, when a furry feline landed on my knees and made itself at home. I think a combination of book, grass and trees, sun, and cat is pretty close to heaven, myself. Enough to make me agree with Rohr and say, "Yes! The divine is in everything and I love every little pebble of it!"
However. My introduction to this cat had been the night before, when I'd spotted it chewing the head off a baby rabbit. Fair enough, that's what cats do. But it meant that this lovely peaceful garden was overlaid with violence, loss, and death. There's always a tension between the beautiful and the terrible.
That tension was what I missed in Rohr. When he talked about the divine being part of matter, he mentioned rocks, flowers and trees. Is the divine also in bathtubs and multistorey car parks? And if not, why not? How about viruses infecting their hosts or those parasitic wasps? I cannot for the life of me see how you can believe God is in everything visible and then say, as Rohr does, that "God is the ultimate nonviolent one". I can see how you can get to a God who is beautiful and terrible, awe-inspiring and delicate, joyful, capricious and with a black sense of humour. That isn't where Rohr seems to get to.
But I'm not sure exactly what I do think about God and creation. That's why it's complicated. Do I believe God is the cat? God is in the cat? God sent the cat? "God created the cat" is probably the only statement I'm comfortable with, and even that is rather fuzzy (furry?) since, of course, I also know the cat was born in the usual way, rather than being formed by the paw of God.
So in the end, I stroked the cat, enjoyed the sunshine, and let God work out where he was all by himself. 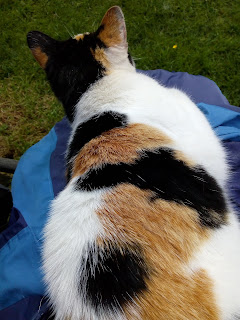 Will you do something differently?

I don't know. The last chapter points out that this is a new way of seeing things, and suggests a couple of meditations to try. You won't be surprised to learn that these didn't really inspire me. It's been interesting to think about the relationship between God and creation, but I largely either disagreed with Rohr's conclusions or didn't see the point.

You know what? I will remember the cat. That cat embodied the main issue I had with Rohr's theology. And it sat on my lap and purred, for which much may be forgiven.