Live in the light

October 22, 2018
The final study in the Tenants of the King booklet focused on a passage from Romans 13, about submitting to the governing authorities.  As I read through the study, it seemed less about submitting to authorities, and more about engaging with and challenging them.  So I found Ephesians 5:8-16 instead. For me, this passage sums up the kind of things that churches can do.

For once you were darkness, but now in the Lord you are light.  Live as children of light - for the fruit of light is found in all that is good and right and true.  Try to find out what is pleasing to the Lord.  Take no part in the unfruitful works of darkness, but instead expose them.  For it is shameful even to mention what such people do secretly; but everything exposed by the light becomes visible, for everything that becomes visible is light.  Therefore it says, 'Sleeper awake!  Rise from the dead, and Christ will shine on you.'  Be careful then how you live, not as unwise people but as wise, making the most of the time, because the days are evil.


Support what is good already

...for the fruit of light is found in all that is good and right and true.

Earlier this year I attended an Eco Church conference.  One of the seminars was about taking church outdoors (something I often wish for when it's a sunny Sunday!) and a quote which stuck with me was: "Don't just look for misery and how we can help.  Look for the good stuff that you want the church to be part of."


Often as Christians we feel like we have to set up our own sanctified projects.  But, especially on a local level, there may be a lot going on already.  Does your area have a community garden?  a Friends of the Park group?  a wildlife trust?  a nature reserve?  If people from the church get involved with these things, they can gain expertise in caring for the environment, as well as building links between the church and the community around it.

Looking wider, there are many national and international charities to get involved with.  Christian ones include A Rocha, Operation Noah and Tearfund. Others include Avaaz, who campaign on many issues, including environmental ones; Greenpeace, Surfers Against Sewage, and WWF.  Supporting them can be as simple as adding your email to an online petition.

Expose the works of darkness

Take no part in the unfruitful works of darkness, but instead expose them.  For it is shameful even to mention what such people do secretly...

Go on, admit it.  You read that second sentence and thought, "oh yes, nudge nudge, wink wink, we all know what that means..."  OK, admittedly Paul was talking about fornication in the previous paragraph.  But that's a long way from being the only shameful secret.  What about pouring toxins into the water supply and covering it up?  What about ignoring environmental laws to make a bigger profit?  What about corrupt governments taking handouts from energy companies?

Many of these are issues of injustice, and the church already has a good track record on challenging injustice.  It has campaigned on issues from slavery to debt relief to fair trade.  Maybe you hadn't realised that climate change is a justice issue too - the poorest and least able to cope will bear the largest burden.  As the IPCC report said, “A key finding of the report is that these efforts to limit global warming to 1.5C can actually go hand in hand with many others intended to address issues of inequality and poverty eradication.”  The church needs to speak out and take its part in exposing environmental injustice around the world.

...everything that becomes visible is light.

Once the works of darkness are exposed, they can be changed.  It's surprising how something obvious can be invisible.  Take plastic packaging for instance.  I never used to "see" all the plastic bags that my vegetables came in.  Now, every time I turn around, there's another one!  Use an onion: bag in the bin.  Finish the peppers: bag in the bin.  Put the apples in the fruit bowl: bag in the bin.

But now I've seen them, I can change.  I got my first veg box the other day.  A whole box full of fresh produce, and not a plastic bag in sight! 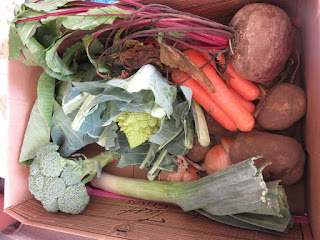 All of us in the study group admitted that we'd never thought to pray about environmental issues, even if we were concerned about them.  Jesus wakes us up and shines a light in our faces, says Paul.  What blind spots is he illuminating in your life?  And what is he waking you up to do?


Be wise and make the most of the time

Be careful then how you live, not as unwise people but as wise, making the most of the time, because the days are evil.

There's a book I may have to get hold of, called The Parents' Guide to Climate Revolution by Mary DeMocker.  In this review of it, the reviewer suggests that the book's key message is, "it’s better to skip washing out the peanut butter jar... and then use the time to call our congressperson."

Translated from the American, that means that she's suggesting that it's more critical to lobby our MPs to pass laws about cleaner energy, than it is to cut every last piece of plastic out of our lives.  Sure, the small things are good steps in the right direction.  But right now we have 12 years or less to slash carbon emissions.  What will have the biggest effect?

Mary DeMocker points out that parents are actually well-placed to influence others, because they tend to have large social networks.  Interestingly, a similar comment was made at the Eco Church conference regarding churches - they are more influential than they might think.

Even if you don't feel you know many people, you have an MP you can write to, a supermarket you shop at, a local council you can lobby, a Facebook account you can share stuff on.

What is the most important thing for you to do now?


Introduction: Compostable Christians
Study 1: The Importance of Creation
Study 2: Groaning Inwardly
Study 3: Do Not Fear!
Study 4: Live in the Light