September 30, 2016
I have surprisingly few photos for this month, probably because Graham was busy several weekends (two Saturdays volunteering and one weekend away).  When he's not around I a) don't take the boys anywhere interesting and b) forget to take any photos even if we do go somewhere.  We've been getting back into the school routine with Toby, and Theo has started one morning of preschool a week.  It doesn't seem like five minutes since I was showing him off there as a new baby! 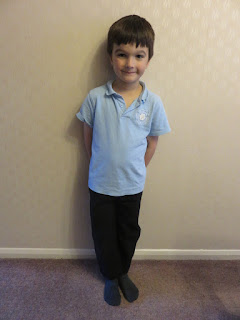 - is now mostly cycling to school, and insists on wearing a high-vis vest to do so (not a bad thing!)


- wanted to transform his room into an arts and crafts den, like in the TV program Dengineers (kind of like Changing Rooms for kids).  He got a new bed when Theo moved out of his cot, so we'd already moved some stuff around.

- can do some pretty good tricks on the trampoline.

- made a lovely cup and saucer with help from a friend who is a potter.  She kindly fired and glazed them for us. 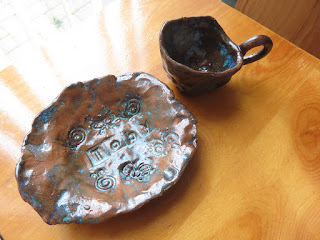 - is doing well in Year 1 but sometimes being challenging at home.  Apparently this is quite normal. 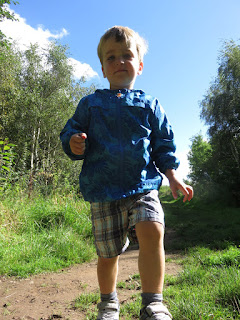 - is a little tearful when left at preschool but generally happy after that.  It helps that he already knows several other younger siblings who go there.

- moved into his "big bed" without problems. 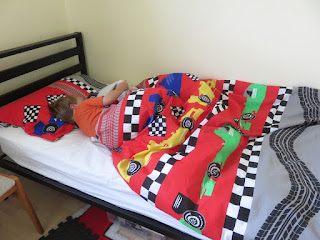 - likes drawing circles, lining up cars and building tall towers out of Megabloks.

- has enjoyed the blackberry season!  (He calls them black berries, with the emphasis on the ber.)

- finally getting rid of most of the baby stuff!  I sold some at an NCT sale, donated some, and took some to the tip.  Finally I have empty boxes (it's only taken a year...)

- enough blackberries to make jam.  It doesn't feel like summer if I haven't made some jam.

Recipe of the Month: Middle-Eastern rice with feta and harissa courgette 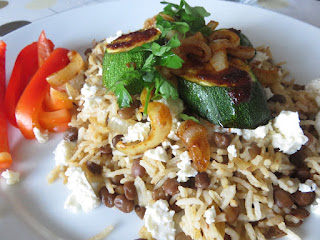 So I bought some harissa paste for one recipe, and then of course had to find several more recipes to use it all up.  Apparently harissa was all the rage last summer, because it featured heavily in the June and July 2015 Tesco magazines.  This is an adapted version of one of their recipes; it's not too complicated but looks fancy once you've piled it all on the plates.

Put the rice in a pan and add 400ml boiling water.  Put the lid on, return to the boil, then turn down to low and cook for 15 minutes.

Meanwhile, heat 1 tbsp of oil in a large frying pan and add the onions.  Cook fairly gently for 15 minutes or so until golden.  Add the butter, then the cumin and paprika.  Cook for one more minute.  Remove a third of the onions from the pan and set aside.

Add the rice and lentils with a splash of water.  Cover and cook for a few more minutes, to warm through.

Slice the courgettes thickly on the diagonal.  Mix together the harissa paste and remaining oil.  Brush over the courgettes and grill or griddle until done.

Pile the rice mixture onto plates.  Crumble the feta over, add the courgettes and reserved onions, and scatter some parsley on top.  Serves 4.

Variations: a bit of tzatziki (yoghurt with cucumber and mint) goes nicely if you don't fancy feta, and some pitta on the side would be good too.  Aubergine or chicken would work as alternatives to the courgettes.