September 07, 2016
Really this post should be a Monthly Munch, but I feel like my last few posts have covered most of the things I'd usually put in my regular roundup.  So I thought I'd concentrate on the interesting part: the last three days of August.

We set out on the Monday morning and drove west, to the area where England meets Wales and all the road signs suddenly become bilingual.  A couple of hours later, we arrived at the lush green beauty of Ty Mawr Country Park, just outside of Wrexham/Wrecsam (yes, many of the places have two names, or at least two spellings, too).  What a view to eat lunch by! 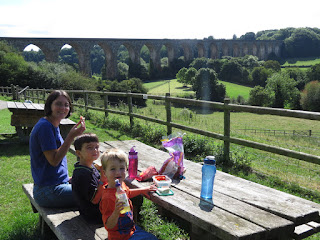 That bridge arching across the valley is the Cefn viaduct, a close relative of the bridge we had really come to see.  The viaduct carries a train line across the River Dee; it's actually taller and a lot more visible than its cousin along the valley, the Pontcysyllte aqueduct.  The canal-carrying aqueduct is the famous one, but it hides itself well.  I thought we might be able to see it from the park, but we didn't get a glimpse.  That had to wait till the next day. 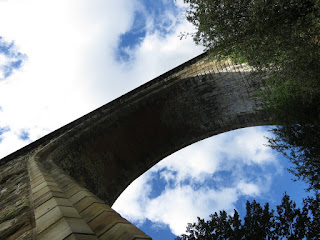 Meanwhile we walked down the hill and gazed up in awe at the gigantic pillars of the viaduct.  We followed a pleasant path along the Dee and found a gravelly beach, where the cool rippling water looked very inviting.  Back at the top, Toby had great fun riding his scooter around a BMX course, and we rewarded ourselves with an ice cream. 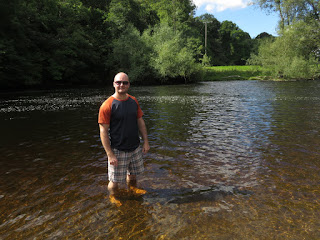 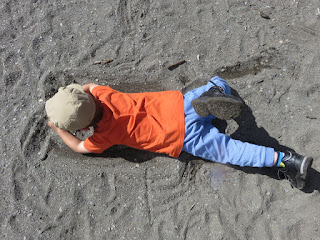 Graham had found an AirBnB property to stay in, and it was excellent.  We had four large bedrooms, lots of toys, a beautiful location, lovely hosts, and even the use of a sauna!  That first evening we sauntered along the road to the local pub, a community-owned venture called the Tyn-y-Capel Inn.   We couldn't really object to the view at dinner either! 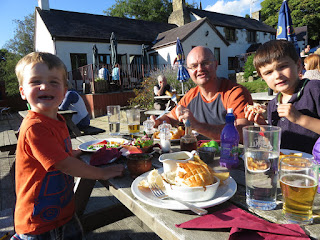 Next day we set off to discover the Pontcysyllte (say pont-k-suth-teh) aqueduct.  We parked at Trevor Basin, a pretty little canal basin with an informative visitor centre and some cafes.  Even from there the aqueduct is not particularly easy to see, until you walk to one end and suddenly realise there is an awful lot of empty space in front of you!  Crossing the aqueduct was not as vertiginous as I thought it might be.  On the towpath you have a sturdy railing on one side and a boat-width of canal on the other, so although it's high, it feels pretty safe. 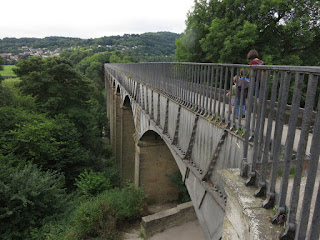 We couldn't leave without crossing it by boat as well.  Theo was NOT keen on the idea; I think he imagined it would be like going on a train.  Once he realised that, unlike a train, a canal boat is fairly quiet and extremely slow, he relaxed a bit.  I'm not sure you get a tremendously different experience of the aqueduct, but it was a nice ride.

For dinner that night, the magic of TripAdvisor led us to the Cross Keys, which is really not somewhere you would just happen to be driving past.  We were glad we'd found it; the food was excellent and the owner and chef (who happened to have studied in Derby) made us feel very welcome.  When we mentioned that we'd share one children's meal between the two boys, it came out ready divided on two plates, which has never happened anywhere else.

And it was the final day already!  Theo had a tantrum because he didn't want to leave the guest house, which is most unlike him.  Once we'd peeled him off the doorstep for the fifth time we managed to get everyone in the car, and we drove over the Horseshoe Pass and down to the Horseshoe Falls.  There is no connection between the two, as far as I know, except a certain similarity in shape.  The Horseshoe Falls was designed by Thomas Telford to draw water off the River Dee and into the Llangollen Canal.  The genius of the plan is that the Llangollen Canal is the same one that soars over the Dee on the Pontcysyllte Aqueduct, several miles downstream.  Somehow that water ends up 120 feet above the river it came from - with no pumps or locks involved! 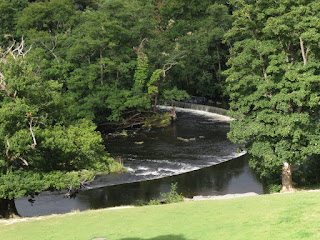 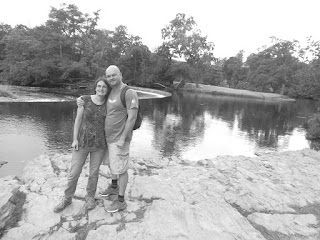 We then drove into Llangollen itself, picked up a sandwich and let the boys loose on the playground.  After a while Graham and I thought we might actually be dying of boredom, so we packed them into the car again and we took a rather roundabout route to the bottom of a path up to Dinas Bran Castle.  This ruined fort is perched on a hill above Llangollen, with simply outstanding views.  For some reason the boys have to be coaxed along a flat walk, but if you put them at the bottom of a steep climb they will scamper up like little rabbits.  Graham and I enjoyed the chance to stretch our legs, too - but exchanged boredom for fear at the top, as we were convinced someone would fall over a sheer drop at any minute.  Fortunately catastrophe was averted for another day, and we all lived to wave goodbye to Wales. 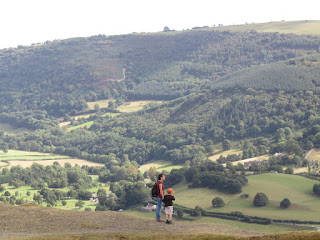 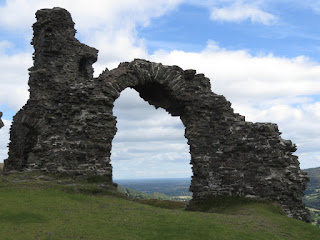