Living with other people

September 24, 2016
On a recent trip to the library, I picked up a book called A Place of Refuge, by Tobias Jones.  It turned out to be the story of Windsor Hill Wood, the community that he and his wife set up in Somerset - a house in an abandoned quarry, surrounded by woods, welcoming to all who came.  They cleared trees, planted vegetables, raised pigs, carved wood.  Their three children grew used to having different people around the dinner table every night.  And over the first five years of failure and success, they gradually learned how to make a working community with hurting, messed-up people. 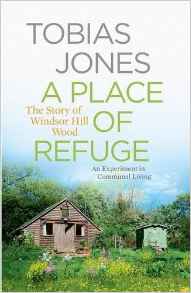 It was fascinating on several different levels, but I realised it resonated with me for one particular reason.  It reminded me of Yeldall Manor.

For many of my growing-up years, my dad worked at a drug and alcohol rehabilitation centre.  At that time, staff were encouraged to "live in" with their families, in self-contained flats on site, and we did so for three years.  Yeldall had been started by one couple who invited an addict into their home, and the family feel was still there.  Everyone ate evening meals together in the wood-panelled dining room, Father Christmas appeared by the enormous tree every year, and us kids played pool and watched TV alongside men who came from lives we could never have dreamed of.

The worry and rewards of having their young children living with so many troubled adults is a key theme in A Place of Refuge.  Tobias Jones talks about how easily the kids accepted everyone, and the benefits for the adults of being able to play again.  They wanted their community to be, at heart, a family home, and so it was.  But there were also worries about the children's safety, and whether they were getting enough attention.

As a child, you live in a different world.  I knew what Yeldall was for, of course, but I had no concept of what kind of issues people were struggling with.  For me, living at Yeldall Manor meant making dens in the woods with my friend Anna, or playing hide and seek in the huge Victorian house, wondering what it had been like a century ago.  It wasn't until many years later that I realised my parents could have had the slightest worry about bringing their family to live there.

I also identified with the strict routine that the Jones' built up at Windsor Hill Wood.  They quickly found that it was necessary to have defined times for cleaning, cooking and other work, to make the community run smoothly and ensure that everyone was doing their bit.  Like any family, extended or not, there were still arguments about washing up!  But they found that people responded better if they had to take on responsibility for certain tasks, and were a functioning part of the whole.

Yeldall had a similar routine.  It was marked out by the clanging of a bell, which happened to be situated on the wall just outside our bathroom.  When my grandma came to visit, she was convinced that someone would ring the bell every time she went to the toilet!  I went through a phase of watching Neighbours every day; the programme finished at two minutes to six, and I became an expert at sprinting up the hall from the TV room to the dining room, sliding into my seat at the table just before the 6:00 bell announced the prayer for dinner.

And finally, Tobias talks about the pain of having to ask people to leave.  Or a person would just disappear, never to be heard from again.  There were always questions about whether they could have done something differently.  But they had to come to terms with never being able to help everybody.  Sometimes the community made a noticeable difference to someone's life, sometimes not.  Nobody stayed forever, and the goodbyes were often hard.

Even as oblivious children, we knew when someone had been asked to leave.  Everyone knew.  It changed the atmosphere for a day or two.  Yeldall had a defined rehabilitation programme, unlike Windsor Hill Wood, and most residents worked their way through to the end, but there were always a few who left early.  I imagine it wasn't any easier for the staff there, than it was for the Joneses at their community.

I have to say, the description of community life in A Place of Refuge did not make me want to jump back into it as an adult!  It sounded like the frustrations of family life multiplied by about a million.  But it also sounded like a very special place.  They're currently advertising for a new warden to take over from the Joneses, should you happen to feel a calling to that kind of thing.

Or if not, Yeldall Manor is also a very special place.  It's still changing lives and would welcome any support you can give.  And no, you don't have to take your children to live there.  But I'll always be glad that my parents did.