June 24, 2016
I don't usually do politics.  Occasionally I have felt like I should take an interest, as an intelligent citizen of a democratic country, but I get rapidly disheartened by all the name-calling, and my resolve quickly dissipates.  So I try to get enough information to make a reasonably informed vote, and that's that.

But on a day like today, politics is hard to ignore.  The EU referendum campaign involved at least as much name-calling and twisting of the truth as any other, and I felt even less qualified to make this decision than usual (how am I supposed to know anything about international trade agreements?  Does anyone know anything about international trade agreements?)  Being naturally inclined towards the status quo, I started off tending towards staying in, and didn't find any arguments compelling enough for me to switch sides.

So I am still slightly disbelieving that we actually decided to take the leap.  About the only thing I can think of to say is, Hopefully it won't be as bad as all that, really.  Most of the time, most of these large systems seem to self-stabilize somehow - probably because of all the actual decent politicians working away tirelessly behind the scenes - so even a large shove may prove less rocky than we think.  Or else the whole thing may capsize.

But for now, life goes on.  It's heartening to see that the sun still shines, and the flowers grow, and the birds sing in the trees despite our petty human dramas.  Out in the back garden, I have just spotted some tiny green tomatoes on my huge leafy tomato plants, and the strawberries are starting to ripen. 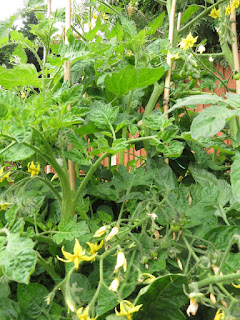 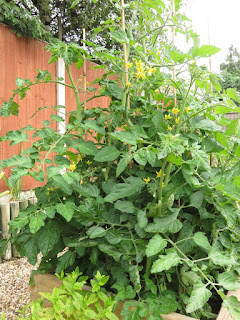 The two plants that I thought were courgettes suddenly shot up and revealed themselves as sunflowers - which is fine, too, but I don't know where they came from! 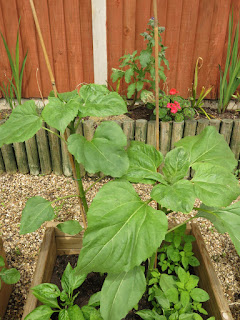 We have been eating rocket morning, noon and night for a while, but it's now gone irrevocably to seed.  There should be some spring onions hiding in there, so maybe they'll now get a chance to grow - the rocket went a bit more rampant than I expected.  And finally, I tried dwarf runner beans for the first time this year.  They look very pretty right now.  Hopefully they will become very tasty too. 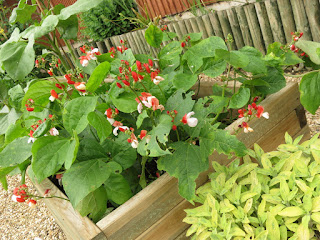 So if you'll excuse me, I will step out of the world of politics again and go dig in a different kind of dirt.  One that was there before we all existed, and will still be there after we've gone.  In all the shouting and upheaval, I hope you find a place of peace today. 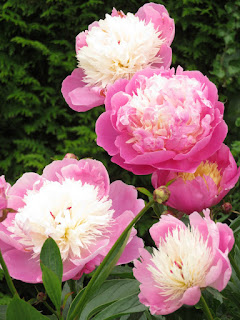