June 12, 2016
Did you know you could drive an Intercity train through the centre of Derby?  Or eat breakfast under a giant chandelier?  Or even get chocolate direct from Willie Wonka's factory?

Recently I've been discovering some new aspects of Derby, and it seemed like a good time to let you know all about them.  First up was #DerbyBloggersBrunch, a new initiative organised by the enterprising Monet Brooks of Munching with Monet.  She did an excellent job, gathering fifteen local bloggers at the newly opened and gorgeously opulent Cosy Club for a Saturday morning brunch.  The group was exclusively female and many, I guessed, were in their early twenties, which suddenly made me feel extremely old!  It was energising to meet so many new people and find out a little about their interests and experiences of the strange online world that is blogging.

A few weekends later, we were back in town as a family.  Our friend Kath was running a pottery taster class at Derby Museum.  She instructed Toby and Graham in the technique of making a coil pot, and they both produced quite creditable specimens!  Some other lovely ladies were downstairs in the cafe; they introduced Toby to watercolours and he painted a cute little owl plaque. 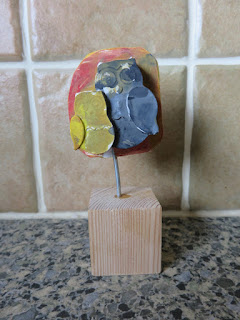 Up the road, the children's trail was in full swing for the Derby Book Festival.  Our task was to spot and identify several dozen children's book characters in the shop windows.  Elmer, the Mr Men and Spot the Dog were familiar to the boys, and I helped them out with older characters such as Pippi Longstocking and the BFG.  We had just identified the colourful display representing Charlie and the Chocolate Factory, when a man popped out of the shop and said, "Are you gentlemen doing the children's book trail?"  When Toby and Theo replied that they were, he presented them both with a bucket full of chocolate Easter eggs.  An unexpected treat!

We made one last stop that Saturday.  The Silk Mill had its model railway running, so we headed over to see the trains.  We discovered a new exhibit had arrived since we were last there; there is now a replica Intercity cab to sit in, complete with a video projection of the journey from Derby to York.  The boys loved it (I think Toby was inventing various disaster scenarios) and Graham and I found the steady motion of the rails unrolling in front of us strangely relaxing.  We decided someone should put it on Netflix, to go with those videos of crackling log fires and goldfish in tanks. 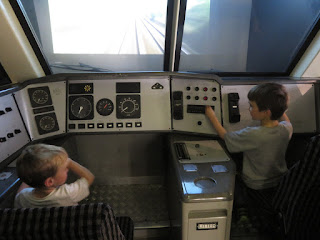 I had vaguely assumed that the large model railway setup was run automatically - press start and off it goes.  But when Toby and I were allowed to crawl through the magic hatch and underneath the landscape, we found an intent young man hiding at the back, concentrating hard as he flipped switches and adjusted the speed.  It looked almost as difficult as controlling a real live railway, and we crawled back to see the 44-car coal train chug round with a new level of appreciation.

And finally, one more Derby Book Festival event.  I thought the talk about Shakespeare and the Bible sounded interesting - and free! - so one evening I left Graham to wrangle the boys to bed and took myself off to Derby Cathedral.  The speaker was a red-bearded academic from the University of Nottingham named Jem Bloomfield, who has just written a book about these two cornerstones of the English language.  I found what he said about how people read sacred texts fascinating.  I recognised many of the examples from the point of view of Bible study, although I was less familiar with that kind of approach to Shakespeare's works.  Apparently there is even a Lectio Shakespeareana, akin to Lectio Divina!  Who knew? 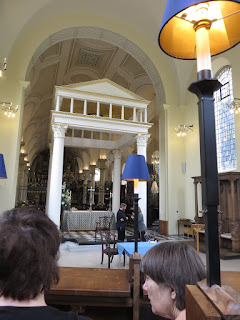 I didn't pick up a copy of the book, but I did find Jem's blog, where the first paragraph I read: “We believe in one God, who’s rather interesting really, when you come to think of it…” made me laugh and finish the article.

So, God is interesting, and people are interesting, and so are model trains and squidgy pieces of clay and lots of words put together and buckets of chocolate (especially when you're two).  It seems like everything is interesting once you look a bit deeper - including the city of Derby.