April 13, 2016
It was too nice to stay in today.  The sun was shining, the air was warm, and Graham had taken Theo out for the day, so I was on my own.  I managed a few hours of working on the website, then slammed the laptop lid and headed out to find some sunshine. 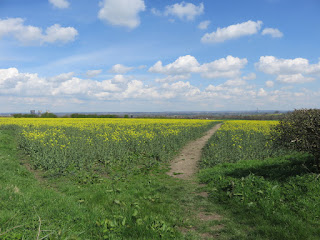 I recently read a book entitled The Wild Rover, about walking Britain's footpaths.  In the first chapter, the author, Mike Parker, draws a 3-mile radius circle around his Welsh home, noticing how many footpaths within that area he has never walked.  When we got out the map for our own area, we noticed the relative paucity of paths; hemmed in by major roads, a railway and a river, many rights-of-way simply dead-end a short distance away.

However, a few minutes' drive down the road, the village of Repton is surrounded by a spider's web of pink dotted lines.  I parked outside the tall-spired church and set out, OS Landranger map in hand. 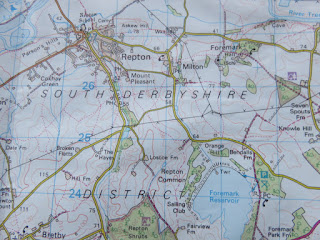 Considering how strongly Ordnance Survey maps and rights of way are linked in my mind - it hardly seems that you could have one without the other - I was surprised to learn from The Wild Rover that the latter were only marked on the former in 1958.  Before then the Ordnance Survey mappers had side-stepped the whole debate by avoiding any mention of a route's legal status.  And debate it was.  Britain's network of public access, which we fondly imagine to have been solidly signposted since time immemorial, was the subject of numerous Bills in Parliament and a few bitter fights between those who owned the land and those who wanted to walk across it.  Fortunately the walkers won and the paths were protected. 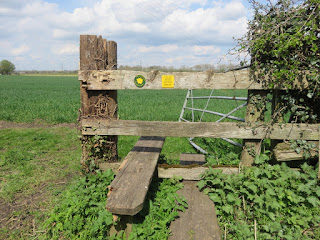 There is something intoxicating about setting out and knowing that you could walk to the other end of the country, if you wanted to.  The paths will go as far as you will; you aren't tied to a circular route, or hemmed in by the boundaries of a park.  Of course, one of the problems with family life is that someone's usually expecting me home to cook their dinner, but today I had longer than usual, and I was keen to make the most of it.

Don't be expecting big thrills, though.  At their worst, paths dissolve into a muddy mess in winter and are overgrown by nettles as tall as your head in summer.  They tramp you across endless dismal fields and then abandon you in one with no obvious means of escape.  They squeeze between grubby walls and fences, and place you nose-to-nose with the local sewage works.

But at their best - and a warm spring day is one of the best times to walk them - they open up hidden pockets of countryside you never knew existed.  They allow you to go for miles without seeing another human being, and eat lunch in an open field surrounded by skylarks.  They wriggle past streams, through woods, and up hills, and then drop you back into a village where you can peer into everyone's gardens as you stroll past. 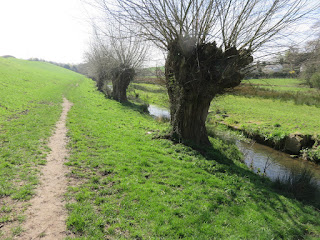 And if you're in the mood for small thrills, there are plenty.  Today mine were: a perfect little brook lined with ancient pollarded willows; a giant pig snoozing in the sun; a buzzard circling overhead at lunchtime; a stoat dashing across the track and vanishing instantly into a field of young wheat; and most unexpected of all, a pair of pure white peacocks in someone's back garden.


Now, of course, I'm back at the laptop.  There's always work to be done.  But sometimes you just have to get out and enjoy the sunshine, and I'm glad I was able to.