Even when it was reduced to £2.5 million, it was still far too much for the Cavendish family to pay.  They were forced to give their house to the government in lieu of the taxes.  This house wasn't just an average suburban semi, however.  The head of the Cavendish family was the Duke of Devonshire, and the house was Hardwick Hall. 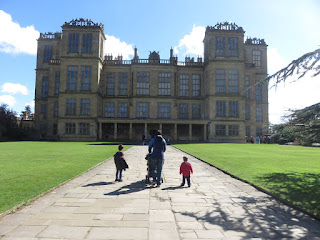 The story of the break-up of many great estates in the 20th century is a fascinating one, of which I only know snippets.  Two world wars had an irreparable effect on the wealth of many landed families, of course, but the change in taxation seems to been at least as big a burden.  The amounts charged are so enormous (the Cavendish estate was taxed at 80%!) that I assumed the tax had been brought in on purpose to destroy the gentry's power.  Interestingly, that doesn't appear to have been the case.  The death duty, or inheritance tax, in question dates back to the Finance Act of 1894, which was enacted - why else? - because the government was running a huge deficit and needed more money.

Presumably the government did not particularly want historically valuable houses which would cost a fortune to keep up.  Fortunately, the National Trust was formed in the early years of the 20th century, and many of these relics of the past were slid into the charity's lap.  It has done quite an amazing job of caring for them.

And so, one sunny Sunday, we found ourselves at the house built by the formidable Bess of Hardwick.  Her proper name was Elizabeth Talbot, Countess of Shrewsbury, and she became one of the richest women in Britain.  Hardwick Hall was clearly intended to make a statement.  On top of a hill, it proclaims "ES" (for Elizabeth Shrewsbury) proudly in all directions.  Elizabeth I's advisor Robert Cecil described the building as "More window than wall", another extravagance in the days before double glazing and central heating. 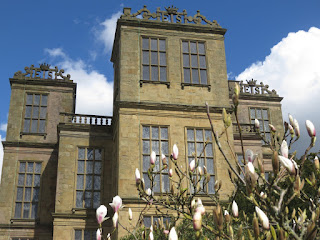 This was actually our second visit, so we vaguely remembered the sumptuous wall hangings and enormous rooms.  The boys still don't have much patience with touring stately homes, so we didn't get much time to admire the furnishings, but this inlaid table definitely stood out. 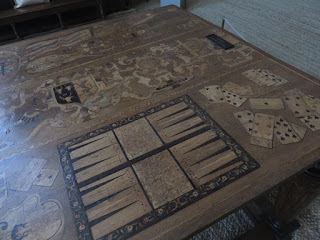 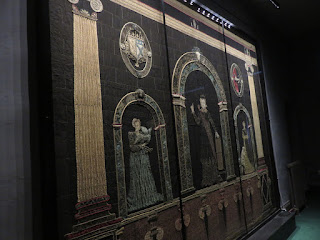 Toby and Theo enjoyed making paper daffodils in the Hall kitchen, and then we went back out into the sunlight to look for a picnic spot.  We found deckchairs! 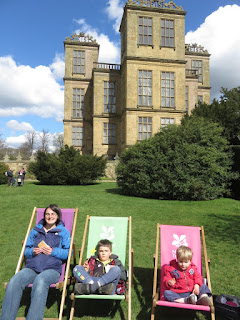 The air wasn't too warm, so we had a game of hide and seek around the gardens to warm ourselves up, and peeked into the fairy houses. 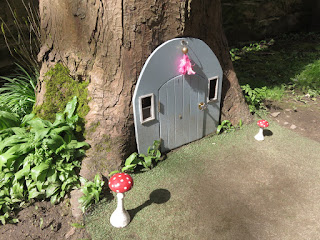 Graham and I would have preferred a brisk walk, but we found it hard to drag the boys away from the woodland play area.  They were perfectly happy searching for bugs underneath fallen logs and throwing wood chips in the air.  We compromised by doing one short walk each.  One day we'll have to explore a bit further. 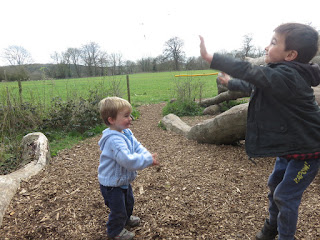 It's difficult to evaluate the rights and wrongs of the estate duty that crippled the Cavendish family.  On the one hand, it seems unfair to tax anyone so harshly, no matter how wealthy they may be.  On the other, the social order was changing dramatically, and the power of the old noble families may well have been coming to an end anyway.  And when it means that we get to spend a day looking at an amazing house, I find myself thankful for the consquences, however unintended they may have been.