Pizza and the kingdom of heaven 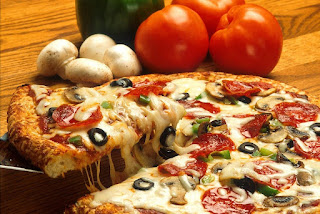 The only snag is, I have to be around in the afternoon at some point to make the bread dough.  I can't do it on a day when I'm out at work and then pick the boys up from school and don't get home until 4pm.  I don't have to do anything to the dough in the afternoons; I just have to make it by about 2 o'clock to give it time to rise.

Cake mixture is easy.  It usually has baking powder in it, plus the air beaten in and held by the eggs, so you can make a cake and cook it straight away.  When I worked in a bakery, those of us who made the cakes worked daytimes.  As we left in the evening, the bread bakers would arrive - hefty guys in sturdy aprons, who would sling around sacks of flour and heavy metal pans - ready to make and prove the bread overnight so it was fresh for the next day.

Some of their bread had yeast added to make it rise, and that took time.  Some didn't even have extra yeast put in - it was based on sourdough, which picks up the natural yeasts in the atmosphere, and that takes even more time.  You can hurry bread along a little, with a nice warm damp place to encourage the yeast to grow, but you can't hurry it a lot. 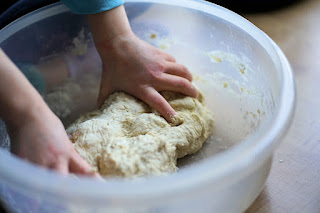 I don't know whether Jesus made bread, or just saw it made, but he had a few things to say about yeast.  One of them is this funny little throwaway line:

The kingdom of heaven is like yeast that a woman took and hid in three measures of flour, until it was all leavened.

That's it.  No further elaboration.

Until one time I was leading a Sunday school lesson, so of course I had to make some bread dough as an illustration.  It wasn't until I'd made a lump with the yeast mixed in, and another lump which was just flour and water, that I realised the most obvious thing.

There is no way to tell which dough has yeast in unless you wait.

I'm still not sure how this relates to the kingdom of heaven.  But I guess one thing it tells us is that it can take a bit of time to see where God is working.  It's not like a cake, where you know pretty quickly if you've left out a key ingredient.  But maybe a situation that at first just looks like a sullen lump of dough will grow, slowly but steadily, into something that shows unmistakeable signs of love and grace.  We don't necessarily have to do anything.  We just have to wait and see.

That can be hard, in our instant, busy, world.  It's always tempting to take the shortcut through the supermarket and settle for the 5-minute fix.  Even Jesus admitted that following him wasn't for the faint-hearted, but he reckoned you gained something much better than home made pizza.  Nothing less than the kingdom of heaven.