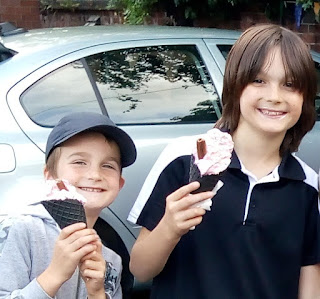 Whatever it was, Melbourne Festival had turned into a surprisingly satisfying afternoon.  I'd seen the posters for it and thought it might be a nice change from yet another walk on a Sunday afternoon, but that was about as high as my expectations had been.

When we arrived, the male three-quarters of the family were immediately pleased to see the signs for classic cars at Melbourne Hall.  Shortly afterwards, I was pleased to discover that there were only about half a dozen of them, so that we could rapidly move on to less mechanical works of art. 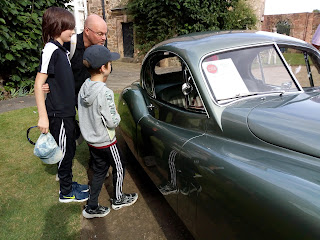 The festival was spread out around the village of Melbourne, in churches, halls, and private gardens.  Melbourne is one of those fascinating places anyway, with archways and alleyways and houses wedged in odd positions.  It's even better when you can duck through an archway and find a dinky garden with a bright display of fused glass, or follow a driveway to a sweeping expanse of lawn featuring metal flowers and birds.

Toby and Theo both had definite favourites amongst the art we saw.  Toby liked the pared-down style of Stuart Hill.  He bought a small print of foxes under an autumn tree. 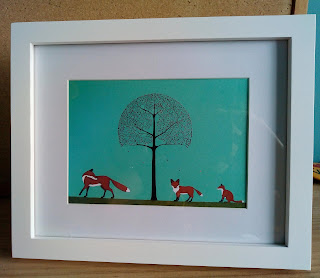 Theo and I both liked the intricate colours of Maria Boyd's art.  He now has a couple of framed greetings cards on his window sill, and I was rather tempted to buy a full size print.  Theo also saw the bright clothes on Megan Crook's stand, and said, "I have to get some of those!"  Most of it was designed for women, but he found a yellow printed neck warmer which he was very happy with. 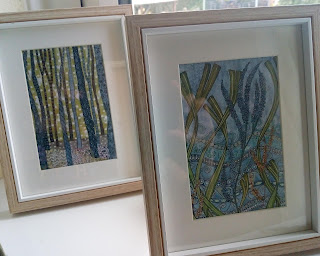 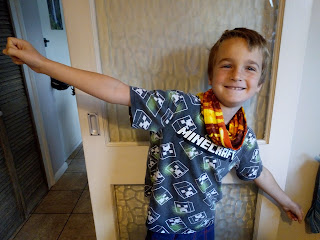 Even the ice creams were artistic - I bet you've never had hot pink ice cream in a black waffle cone before!  These giant rams were on display around Derby over the summer, all in different designs, and this one now belongs to Project D doughnuts, who also produced the ice cream.  We later saw the hot pink vintage van which the hot pink ram had travelled in. 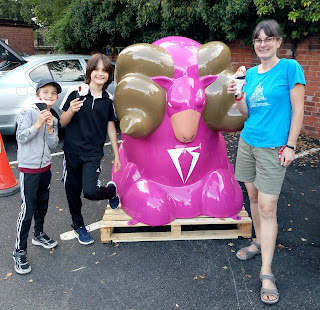 By this point we'd seen everything from tiny ceramic poo emojis to giant metal snails.  Graham had reluctantly decided not to buy a floor lamp made from a giant chain, and we were almost back where we'd started.  The sound of a sax led us to the "Busk Stop" where Adam's Shed were finishing up a set.  We assumed that the eponymous shed was where they practised, and further assumed that the saxophonist in the oversized shiny silver jacket might be Adam, but we could have been wrong about both of those.  Either way, listening to a few songs by a real live band was a perfect way to finish the afternoon. 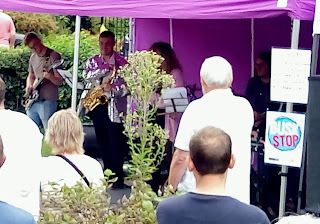 Maybe it couldn't help but be a good afternoon out when we were surrounded by so much colour and beauty.  Art, music, nature, and yes, even classic cars if you must - they all feed the soul.

Sharon Brown said…
Hi Martha,
Thank you for your great review of Melbourne Festival, our aim is always to be a friendly weekend / day out for Art Lovers and families with a relaxed atmosphere and something for everyone. The Art is all for sale and the artists love sharing the story behind each piece.
Food is really important and all our Foodies are local(ish) and passionate about what they do, if you are well fed you enjoy everything else - THE ART, THE MUSIC AND THE CARS - much more.
Hope you have next years dates in your diary - 17 / 18 September 2022 and will come back!
Best wishes
Sharon Brown
(for Arts Melbourne CIC)
PS Melbourne is great at other times too!

A biennial event could be the way to go from here.

Helen Hallows said…
It was an amazing weekend wasn't it!? The Arts Melbourne team made such an effort to ensure the festival was as Covid safe as possible with many artists exhibiting in gardens. It was the first time I had the time to wander as for the last 10 years I've exhibited. It's always such a vibrant festival. This year, after many lost their incomes during Covid lockdgoens, it was also a vital life line for many artists and makers. I hope the festival runs for many years to come.
2 October 2021 at 09:12