Do you imagine a concert audience singing in unison, the spectators at a sports match cheering for their team, colourful crowds in the street for Carnival or Holi?  Does the idea of being in a crowd make you feel uplifted and energised?

Or do you think of being pressed too closely, of protestors causing disruption and destruction, of things being a little bit out of control?  Would you feel uncomfortable and on edge?

Either way, we are rather out of practice at being in crowds right now.

Maybe that's why, when I read Mark's gospel recently, I noticed for the first time just how crowded it is.  On every page, people swarm around Jesus - following him out into the countryside, besieging him at home, preventing him from eating, begging for his help.

Mark has Jesus almost constantly surrounded by people.  Even when he tries to get away, people usually find him pretty quickly.  On one occasion, they start taking the roof off his house; on another, Jesus has to get into a boat to avoid being crushed.  A couple of times he feeds them and manages to send them home.

I'm an introvert.  I find that exhausting even to read about!

Maybe when I asked you how you felt about crowds, you could identify with both feelings - the excitement and the discomfort.  Certainly the crowds in Mark's gospel seem to have been a mixed blessing. 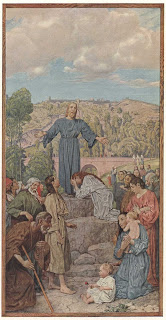 On the one hand, it's easy to see that Jesus just liked people.  As far as we can tell, he loved healing them and enjoyed teaching them (and they enjoyed listening, too).  And you can imagine the fun he had being a bit mischievous with the Pharisees!

Jesus always had an eye for the individual, too.  Even when he was surrounded, he would stop and make time to focus on that one particular person.  And when confronted with people en masse, his default reaction was compassion - not fear, annoyance or indifference.

On the other hand, Jesus never seems to have cultivated crowds for their own sake.  He wasn't like the YouTubers pleading for more followers at the end of every video.  In fact, several times he told people he'd healed not to talk about it - not that that helped very much!  He was also careful what he said - telling stories to the big gatherings, and saving certain teachings for a more intimate group.

Jesus was probably right to be cautious.  In the end, crowds were to be his downfall.  It wasn't just the crowd at the end, shouting "Crucify him," but the fact that Jesus was the constant centre of attention that made him visible - and dangerous.  From the perspective of the authorities, having a jumped-up rabbi roaming around occupied Judea with thousands of people following him was the last thing they wanted.  That was exactly the situation which could get out of control and bring the Romans down on their heads.  Plus this guy was definitely telling subversive stories - even if they couldn't quite understand them.

So they did what most authorities have done, before and since - cracked down as soon as possible and tried to preserve the status quo.

Of course, that never quite works as intended.  Especially not with Jesus.

At this point, the ideal story has Jesus' triumphant resurrection, with all the crowds acclaiming him as Son of God, understanding exactly what he was talking about, and living in perfect harmony with God for ever after.  That's what we'd like to have happened.

Of course, we know from the rest of the New Testament, and the history of the church, that that wasn't anywhere near the end.  The crowds of people were back, pretty soon, listening to the disciples telling them about Jesus.

But when we read Mark, we end on a question.

And how do you feel when the crowds are gone? 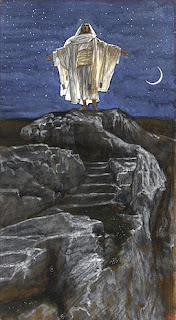 Lynda Green said…
I don’t like crowds I feel to enclosed. I remember when I visited Bethlehem so many wanted to get near the place they say Jesus was born lots of pushing and shoving I just got out and sat unquiet church. When crowds disappear I love to sit quietly listening for Gods small voice.
I love being in full church worshiping God just concentrating on God