January 21, 2020
January is whizzing by, and Christmas was almost a month ago!  It's far too late to be writing a Christmas post really, but the blog has got cobwebbed and dusty from neglect again, and it's an easy place to start.  So let's go.

Toby and Theo had an outdoor carol concert at school, in the absolute falling-down rain.  The parents peered out from under a multi-coloured array of umbrellas, the kids sang their hearts out from underneath dripping gazebos, a live donkey and horse made their appearance during Little Donkey, and the teachers did a flash-mob style rendition of Snow is Falling at the end, to much applause.  It was great. 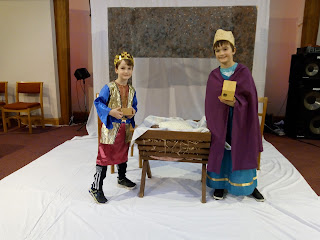 Graham joined the church Christmas choir and spent two months booming, "Rise up, shepherd, and follow!" at odd intervals.  We finally got to hear the complete carol on the Sunday before Christmas, which was packed with a nativity service in the morning and two carol services in the afternoon.

Lights and other shiny things

The Lichfield cathedral illuminations are well on their way to becoming one of our Christmas traditions.  The west front of the cathedral is bathed in a stunning light show, and the inside is filled with art installations, candles and Christmas trees.  This year they used the front of a separate building for a sequence featuring swaying spinning tops, giant presents and galloping reindeer.  Then we walked around to face the cathedral and watched the Christmas story unfold, as angels descended, the stable glowed, and wise men trekked on their camels under whirling starry skies. 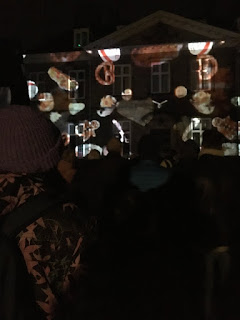 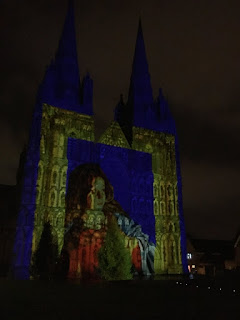 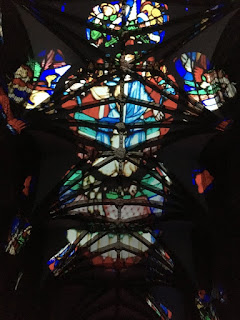 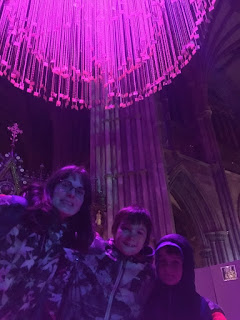 On a slightly less exalted level, I helped out with the village Christingle service, jamming sticky sweets into juicy oranges and trying to light the candles without setting the small and crumbling parish church on fire.  Bizarre though the ritual is, it's one of the few times that the church is actually full, and it's a lovely little service.

We hosted Graham's family this year, which meant that I had to cook a proper Christmas dinner for the first time in many years.  There were only 7 of us so it wasn't a huge undertaking - although I did vastly over-cater, so it was a good thing they stayed for a few days to help eat all the leftovers!  Some friends gave me the tip of cooking and slicing the turkey the day before, then reheating it in the gravy on the day.  It does away with that whole last-minute palaver of trying to chop up the meat while frantically stirring gravy and dishing up everything else - brilliant! 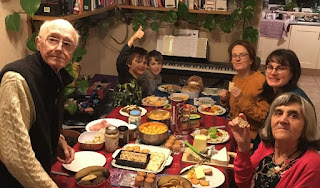 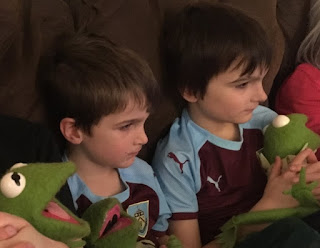 Apart from the food and the presents, we managed a cinema trip to see Frozen 2 (a little sadder than I expected), a snowball fight at Cromford Mill, and a few board games. 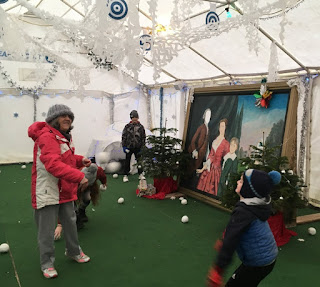 A local garden centre has an ice rink for the season, so we went with a few friends to try it out.  This was the boys' first attempt at skating, and my first try after about 15 years, so we were all a little shaky.  By the end of the session we were mostly letting go of the edge, and Theo keeps asking when we can go again.

After New Year we visited my parents, and had a good couple of days catching up.  The boys clamoured to go to their favourite place - a nearby science centre which they love - and we went for some walks and dug through the Lego box and ate good food. 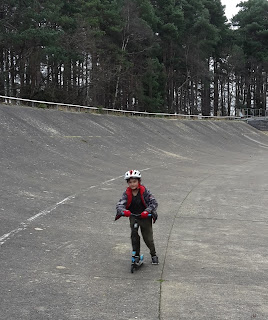 Despite Toby saying he doesn't believe in Santa, he and Theo decided to rig up their bedroom with string, tape and a camera, to try and catch Father Christmas in the act.  He has had many years of evading small boys, though, and simply left their stockings by the door, with a note saying, "Don't try that trick next year!"

They were up at 5 am on Christmas Day, which is our earliest start for a while.  The rest of us got up about 6, and the living room was a sea of wrapping paper by 8:30 in the morning!  The boys had to do a treasure hunt to find their biggest presents (another tip from a friend).  Toby discovered a new bike in the garage and Theo found an electric guitar under the stairs.  They were both very pleased. 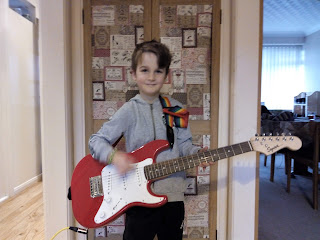 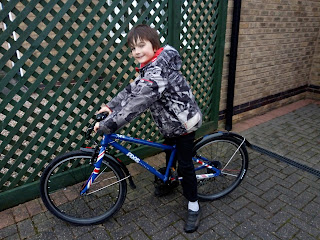