February 13, 2018
I don't know why, but I just did not twig that Theo's birthday was coming up and we might actually want to celebrate, until about two weeks before.  So then I hurriedly scribbled some invitations ("who are your friends at preschool?  Oh yes, I think I remember you mentioning that name at least once before.") and bought cake ingredients.

Theo, somewhat surprisingly, wanted gingerbread cake this year.  I'd seen one once with gingerbread men around the edge, which was cute, so that was easy enough for decoration.  It didn't really lend itself to a theme, though. 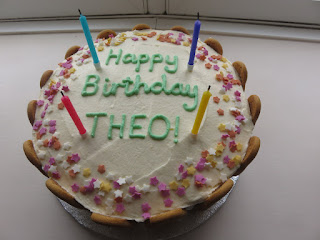 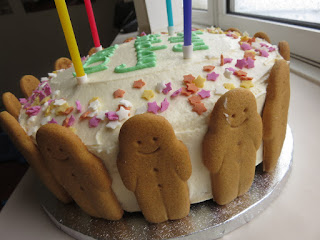 Flipping through the craft catalogue, the best I could come up with was a kind of "funny faces" idea, so I ordered a bunch of stuff.  When the box arrived... it was full of someone else's stuff!  They'd sent me the wrong order, and it was too late to send the right one.

So the craft consisted of some bits I found in a drawer, the party bags contained a few things from someone else's online order, and the games were the old stand-bys of pass the parcel and musical statues.

Did the birthday boy care?  No, he ran around with his friends and blew out his candles and opened his presents and ate pizza and had a good time. 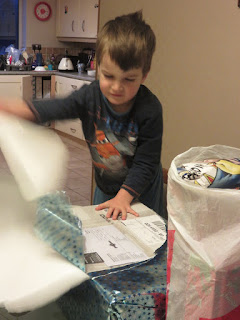 Next day he went to another party.  It was Little Mermaid themed, with an Ariel entertainer and sandwiches cut into shell shapes and themed party decor and a most beautiful Little Mermaid cake.  It was lovely.  But you know what?  I don't think he had any more fun there!

So here's to the disorganized party, at least when your kids are young enough not to know the difference.  And here's to our wonderful four-year-old!  Happy birthday Theo! 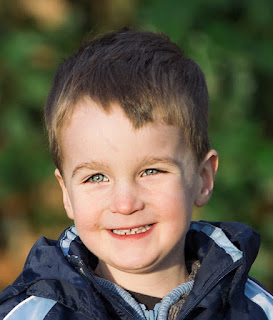