February 06, 2018
One thing I've really enjoyed about working in a cafe again is having a good reason to make cakes.  I've dusted off some of my old recipes and tried out a few new ones too.  Carrot cake and sweet-topped fairy cakes are reliable favourites; a crumble-topped apple cake (with slices of apple pushed into the cake batter) and gingerbread cupcakes have gone down well.

However, I haven't always found much time for baking at home.  This week's been an exception.  Three different bakes have gone in the oven, though you'll have to wait a little longer to hear about the third.

Firstly, I'd had my eye on a recipe for parsnip and pecan loaf for a while.  Yes, parsnip.  Same principle as carrot cake, as in you mostly taste the spices, not the root veg.  Besides, I like cakes with funny ingredients - I've got an aubergine brownie recipe tucked away to see if I ever dare to make it!

Like carrot cake, it uses oil instead of butter, so except for the bit of peeling and grating, it's pretty quick to make.  Pecans aren't cheap on this side of the Atlantic, but toasted pecans are delicious.  I toasted mine several days before I actually got around to baking the cake (so long that Graham asked if they were going to sit on the counter forever, or what) and had to stop myself nibbling at them. 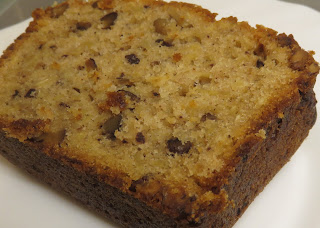 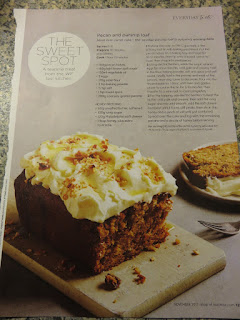 Preheat the oven to 170°C.  Put the pecans on a baking tray and toast for about 10 minutes.  Cool and chop fairly finely.

With an electric mixer, beat the sugar, oil and eggs together until creamy.  Add the dry ingredients and mix, then stir in the parsnip and most of the pecans, reserving about 2 tbsp.

Pour into a lined loaf tin and bake for 1 hour until risen and firm.  Leave in the tin for a few minutes, then tip out and let cool.

That recipe was pretty much by the book - except that it was half eaten before I had time to think about icing it, so we had the healthy, uniced, version.  This next recipe was a "what can I make quickly with what I've got in the cupboard?" type of baking.  There actually was a recipe for white chocolate cranberry cookies in my Colossal Cookie Cookbook, but it required chilling.  So I used the white chocolate pecan one instead (more pecans!) but substituted dried cranberries.  And halved it.  And converted on the fly from cups to ounces.  Who says baking has to be accurate? 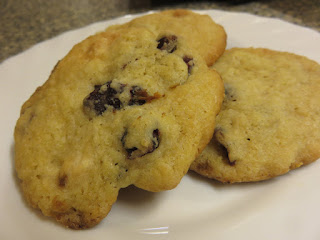 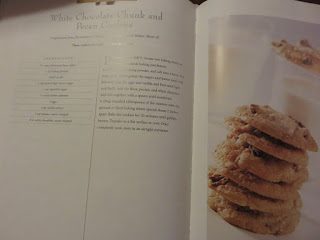 Preheat oven to 160°C.  I should line my baking sheets because my cookies always come out dark on the bottom, but I never do, so let's pretend you're better than me and actually do it.

Beat the butter and sugars together until well mixed.  Add the egg and vanilla and beat until fluffy.

Add the flour, baking powder, dried cranberries and white chocolate and stir with a spoon until combined.

Dollop spoonfuls of the mixture onto the baking sheets.  I got about 20 out of this; I think the original recipe made much larger cookies!  Give them 10 minutes in the oven and see how they look; they might need a couple more minutes to finish off.  Cool on the tray for a minute, then move to a rack to cool.

The third lot of baking was Theo's birthday cake for Saturday.  Surprisingly, he asked for ginger cake.  But you can hear about that one when it's been decorated and done its job for the celebrations!