Revenge on a marrow, and other harvest stories

That's surely not a sentence many people get to say even once in a lifetime. 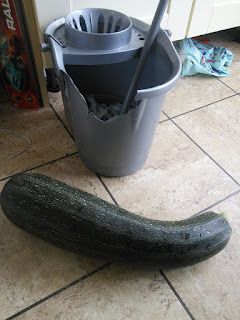 The marrow in question was left, with a group of its friends, at the back of church by an anonymous donor.  It weighed 7 lb, about the same as a newborn baby, but was decidedly less cute and a lot thicker-skinned.  I adopted it and brought it home.

Presumably Theo was just curious about this giant vegetable that I'd left on the counter.  At any rate, he was reaching for that or something else, and shortly afterwards I found a sheepish 3-year-old, a wrecked mop bucket, and a remarkably unscathed marrow lying on the floor. 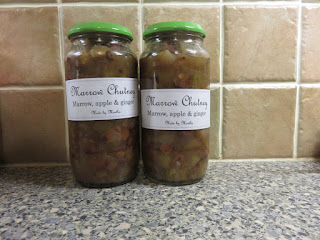 A few days later, I got my revenge on the marrow by turning it into chutney.  This recipe from BBC Good Food made plenty, and used up over half of the vegetable.  The rest I peeled, chunked, and stashed in the freezer for now.  I have vague ideas of making marrow and ginger jam if I collect a few more jars, or I might go savoury and make soup or something.

Apples have been the other big thing this year.  It seemed like everyone was trying to get rid of apples!  I stewed up one big batch for the freezer, and made a bagful into pie. 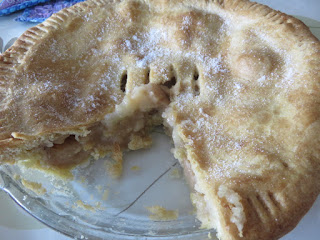 Blackberries arrived early but then got rained on a lot.  Our local bush gave us a steady supply for a few weeks, so Toby made these chocolate cupcakes with blackberries on top. 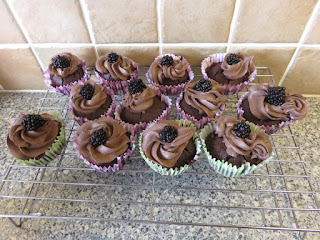 And once again, Graham has been collecting sloes to add to gin.  He discovered Aldi's gin this year, which apparently is excellent for the price.  One batch of sloe gin is already infusing, and another lot is coming soon.

Finally, these are my two pretty pumpkins from the mysterious pumpkin plants.  We've eaten the green one, stuffed; it was very tasty.  I'm hoping if I save the seeds, I might get some more next year! 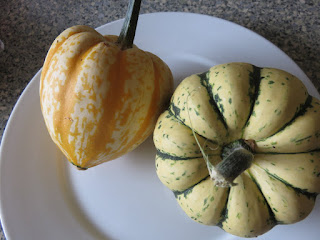