September 01, 2017
Theo and I sat perched on a rocky step in the sunshine.  Somewhere above us, Graham and Toby climbed higher up the path, while behind us, a waterfall splashed noisily down the hillside.  In front of us the land spread out in patches of green and grey and purple, sun-bright and dappled with cloud.  I drew in a deep breath.  We were definitely on holiday. 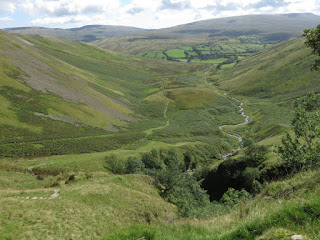 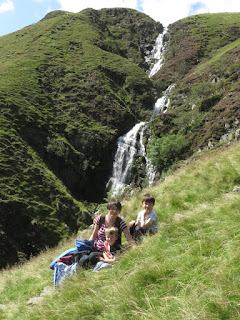 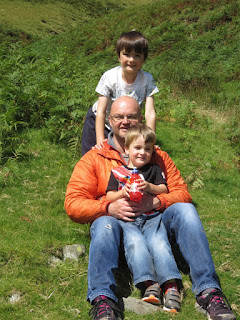 Our usual last-minute AirBnB searching had led us to a cottage on the corner of the Yorkshire Dales.  Technically we were in Cumbria, but this area is far less popular than the more famous Lake District, with the guides tending to use words like "under-rated" and "little-known".  We certainly didn't have the place to ourselves, but then the weather that first day would have dragged the most reluctant walker out of doors.  Or just about.  You can see how enthusiastic our little walkers were! 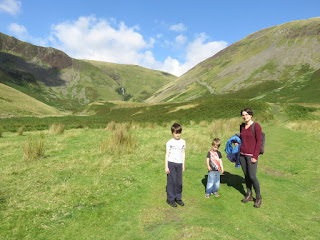 The target that first day was Cautley Spout waterfall.  We had a fairly flat walk along by the stream, then a steep climb up some well-made steps beside the waterfall itself.  By that point little legs were getting tired, so we made our way back down and treated ourselves to fizzy drinks at the Cross Keys.  This is no ordinary pub, but a temperance inn; it hasn't served alcohol since 1905.  It has an impressive array of alternatives.  Graham was delighted to find root beer, while I had ginger beer and the boys went for Diet Coke.  It was a good thing no one else was in the garden - the burps that resulted were tremendous! 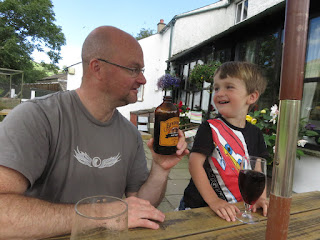 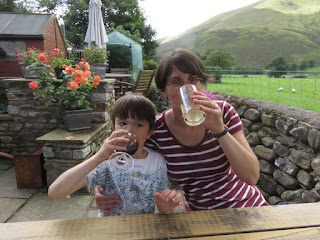 Next day we mooched around the pretty town of Kirkby Lonsdale.  The Devil's Bridge, just outside town, was built in the 14th century, and amazingly, carried all traffic over the River Lune until the 1930's, when the number of vehicles got too much for it.  It crosses an excitingly swirly part of the river, where we were much entertained by some novice canoeists attempting to paddle the rapids.  The boys were happy exploring the rocks for quite some time.  Finally we dragged them away and along the footpath to the Radical Steps - unfortunately less exciting than they sound; it was the landowner who was a Radical, not the steps.  Still, there's a good view from the top.  And fish and chips and ice cream and a sweet shop in the town centre.  Oh my.  No one wanted much dinner that evening. 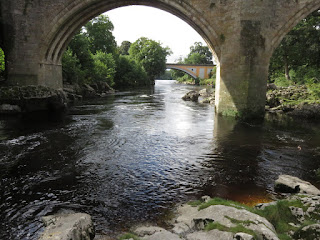 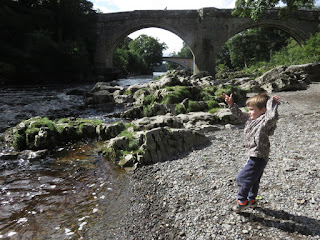 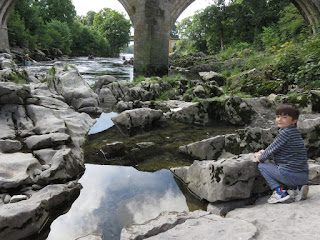 Our cottage was well-equipped with board games which reminded me of my youth.  I'd mercifully forgotten the frustration of shoving straws through a tube to set up Kerplunk, but Theo loved it.  Toby begged for a game of Monopoly and beat me.  Oh, the long-drawn-out torture of losing Monopoly.  That takes me back.

Finally, since we live in landlocked Derby, we always have to go see the sea on holiday.  Only a small amount of bickering about directions was needed to get us to Silverdale Cove.  We arrived at high tide, which meant we got to throw stones in the water for about ten minutes before it retreated, rapidly and astonishingly, across the vast mudflats of Morecambe Bay.  There was a fair breeze with occasional bucketfuls of rain, but we ate lunch in a handy cave, then sheltered under trees as we climbed Arnside Knott for some more views. 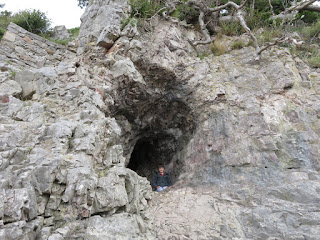 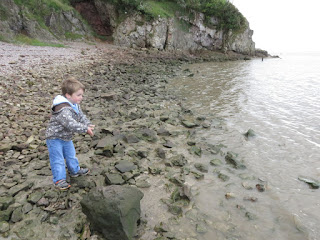 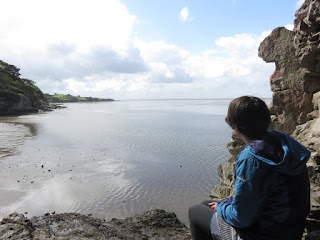 In such a crowded country, it's remarkable that there are so many places still to retreat to for some breathing space.  I'm glad we found another one of them.