The changing map of Europe 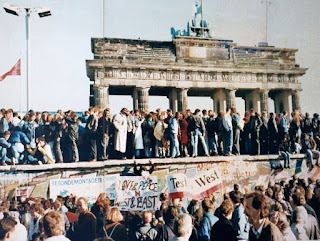 For many of my contemporaries, it was the first big political event they remember seeing on TV.  We didn't have a television then, so I don't even have that hazy recollection.  As I got older, I became aware that many European maps I looked at were no longer correct.  The big splodge on the right emblazoned with the ominous letters U.S.S.R. had now dissolved into smaller countries with unknown names: Belarus, Lithuania, Moldova.  Something called the Iron Curtain had disappeared.  And Germany was now one big country again, no longer split between East and West.

Our history lessons at school focussed heavily on the First and Second World Wars, with odd excursions to the Romans, or motte and bailey castles, or Henry the Eighth.  It wasn't until I studied German A-level that I heard about the Berlin airlift, and my first reaction was: "Why did no one ever tell me about this?!"  Up until then I had always vaguely assumed that Berlin must straddle the border between East and West Germany.  The story of the stranded city supplied only by plucky planes flying night and day to defeat the Soviets was like a fairy tale.  Far more interesting than endless re-runs of trench battles.

Later in the course I wrote an essay - in German, a feat which now astounds me - comparing the 1953 uprisings in East Germany, which were violently squashed, with the 1989 "Monday demonstrations", which were shortly followed by the fall of the Wall.  I dread to think what youthful liberties I took with the history of a country I had barely visited and whose language I hardly spoke, but I remember picking out a couple of decisive factors: the peacefulness and prayer of the demonstrators in the later event, and the new approach of Gorbachev, who encouraged the Eastern bloc countries to work out their own problems in their own way (without Russia sending in the tanks).

Since then I had given that period very little thought, until I picked up a fascinating book called The Year That Changed The World, by Michael Meyer.  As a Newsweek reporter based in Germany, he was in the thick of the action, dashing from Poland, where the Solidarity party ousted the Communists in democratic elections; to Hungary, where the leaders dismantled the border fence and practically ushered East Germans towards Austria; to Prague, where crowds filled Wenceslas Square for the Velvet Revolution.  Events came tumbling over each other, gathering momentum like a rockslide hurtling downhill, far faster than anyone expected.

Meyer does a fantastic job of conveying the determination and randomness of human history.  On the one hand, dozens of people were working tirelessly for change.  He argues that the fall of Communism was as much due to its own leaders realising that something had to be done, as to the people rising up and overthrowing the Party.  On the other hand, a seemingly tiny event can send the avalanche of history off in a completely different direction.  One of the best bits of the story is the reading of the press release on November 9th, 1989, with its one small word sofort - immediately - which sent East Berliners crowding to the wall.  If things had happened as intended - the next day, in a orderly fashion - would the wall have fallen as it did?

It's also striking just how unexpected all these events were.  Even those who were implementing them, both the Communists and their challengers, thought change would occur gradually, over maybe the next 5-10 years.  As for the West, the leaders were mostly entrenched in a Cold War mentality, neither hoping nor working for major change.  But suddenly, in a matter of months, the world shifted.

The translation is rubbish but the footage is good!

One quote brought these historical events right up to date for me.  Gunter Schabowski, the East German offical who read that fateful press release, described his reaction to Hungary cutting a hole in its western border fence: "Here was Hungary... going off on its own and doing something which challenged the very existence of the bloc... And if there were no bloc, where would that leave us?"

The European Union is somewhat different to the Soviet bloc, of course.  But if history teaches us anything, it's that actions can have unintended and enormous consequences.  If a rockslide of events starts, there's not much you can do except try and keep on top.  And perhaps one day my son will be saying, "I was eight when..."