Blessed are the Cheesemakers

April 07, 2017
Sometimes it seems frivolous to write about recipes and the small events of my own life, when in other parts of the world, awful things are happening and other people's families are being ripped apart.  Sometimes the knowing seems to demand a response, or even a responsibility, to look up from my own affairs for a moment, to say yes, I see this, however powerless I feel to do anything about it.

And I wrote that paragraph yesterday, thinking of the chemical attacks in Syria.  But now there's Stockholm.  And whichever day you read this, there will be something else.  The task of making peace seems too enormous to contemplate.

Maybe we should make cheese instead.  Many years ago, I stayed with a family in Romania who became my friends.  I spoke very little Romanian, though some of them spoke English, and many things in their house were very different to mine.  Welcoming as they were, it was hard to feel at home until the evening we made a cake.  Sitting together, passing a bowl of thickening cream around as we took turns beating it with a hand whisk, simply melted away language barriers and cultural differences.  It's hard to be a foreigner to someone you have cooked with.

Unfortunately, I had no one new to share my first experience of making cheese with.  But it was a cheese from a different culture, if that counts.  Theo gave his baby bottle away and unexpectedly decided that this meant his milk intake should fall to zero.  So I had 8 pints of whole milk to use up in a hurry.  My Indian cookbooks assured me that paneer is very easy to make, so what did I have to lose?  I boiled the milk for the requisite five minutes, added a few spoonfuls of lemon juice - slightly sceptically, I have to admit - and to my surprise, it separated neatly into lumpy curds swimming in a yellowish liquid.  I drained it in a net that I usually use for making jelly, squeezed it flat with a saucepan, and I had my very own paneer!  I felt like the pressing could have been improved on, as it was a bit crumbly, but it tasted fine. 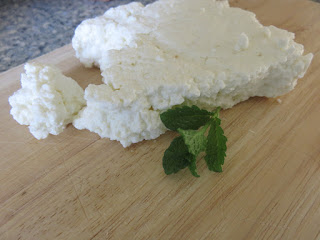 Blessed are the peacemakers.  They need all the help they can get.  But when making peace seems far too difficult, maybe we can be a blessing by making cheese together instead.