Car on a cake

May 23, 2016
It's unusual that Graham makes requests for his birthday.  But for this one he asked if I could make a birthday cake with a picture of Lewis Hamilton's Mercedes on it.  (He's not especially a Lewis Hamilton fan, it's just that the Mercedes happens to have a big number 44 on it.  Guess how old he was this birthday!)  Now, drawing racing cars is not my particular forte, but you know, since he's my husband and all, I figured I'd have a go.

There are plenty of pictures out there, of course: a quick Google Images search turned up this one, and I sat down to try and transcribe it onto paper.  My pencil drawing came out well enough that I felt able to carry on - at least, it looked roughly like a Formula 1 car and the perspective wasn't completely screwed up. 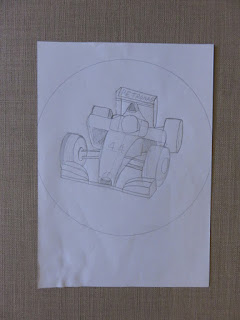 The cake was a simple sponge cake.  I marzipanned and iced it, and set to work.  With the drawing in hand, cutting out the shapes in fondant was relatively simple, as I could trace the lines onto the icing with the point of a knife.  Then it was just a matter of jigsawing them all together, and adding a few lines of detail.  There were a few more things I could have added if it hadn't been getting rather late; and really, the 44 would have been better piped if I'd had some writing icing handy.  But anyone who watches F1 could tell that was Lewis Hamilton's Mercedes, right? 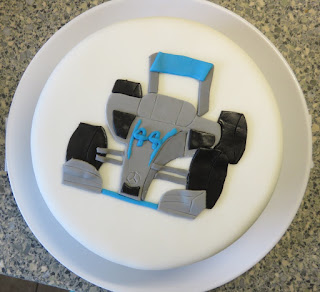 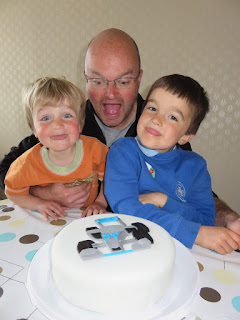