Roasted tomatoes and courgettes with feta

August 13, 2015
This is really good.  And happens to use a few things which are growing in my garden right now.  Win win.  The original Waitrose magazine recipe, from which this is adapted, called it a salad, but it's more substantial than that word might make you think. 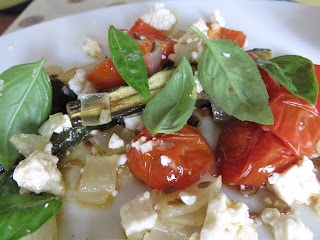 Roasted Tomatoes and Courgettes with Feta

Preheat the oven to 200°C.  On a large baking tray, scatter the onion on one side and put the tomatoes
and peppers on top.  Drizzle over 1 tbsp of the oil and sprinkle with the cumin and cinnamon.

Put the tray in the oven for 20 minutes until everything is nicely roasted.  Divide the courgettes between two plates, pile the tomato mixture on top and drizzle with the dressing.  Scatter the basil and feta over the top and dig in.  It's nice with some crusty bread on the side.