August 08, 2013
OK, I don't know if the East Midlands is secretly the cherry-growing capital of the UK, or if it's just been a good year for them, or what, but there have been a lot of cherries around.  I only ever remembering seeing the little ornamental ones before, more stone than fruit, but these are the real deal. 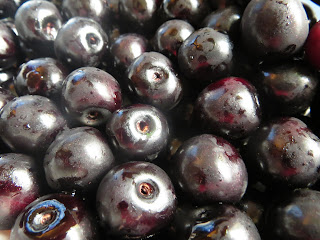 It started when we went to the little playground down the road, and I noticed this tree with big black juicy cherries, right by the swings.  So next time we went, I lugged a ladder along and picked a boxful.  Wouldn't you know it, that was the one day that a guy from the council came along to pick up the litter and empty bins.  I wasn't actually on the ladder at that point, so he looked at the ladder a couple times, and he looked at me, and I'm thinking, "Hey, if you don't say anything, I'm not saying anything."  He didn't say anything.  I made those cherries into cherry sauce and we ate it with ice cream.  Yum. 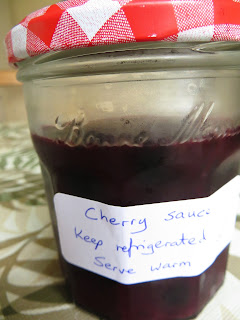 Then we happened to be somewhere else (which shall remain nameless because I'm not entirely sure those trees were public property, although it was certainly public access and no one seemed to be using the fruit) and spotted some more cherry trees absolutely loaded with pretty, yellowy-red fruit.  Literally, you could pull it off by the handful, and some of it was low enough that even Toby could help.  We got about 5 boxes from one tree, and still barely made a dent in its harvest. 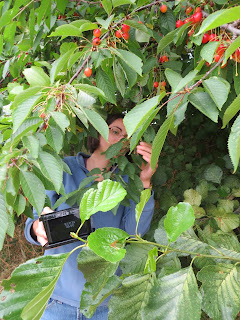 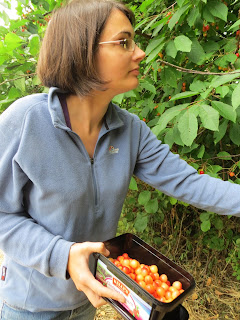 I scrounged some empty jam jars from a friend and had my first shot at making cherry jam.  That initial ad hoc attempt involved not pitting the cherries or simmering them before adding the sugar, both of which probably would have improved the final product.  I managed to skim a lot of stones off, but a lot stayed stuck in the fruit, so a bit of dissection is involved when you come to spread the stuff on your toast.

For my second try I found an actual recipe for Cherry and Cinnamon Conserve and spent some time perfecting my cherry-stoning technique.  The extra effort paid off and the cinnamon spiciness gives it a lovely flavour.  Also, unlike almost every batch of jam I've ever made, this one actually set within the stated 5 minutes of boiling time.  To be honest, using sugar with pectin and two lemons would probably set clear water quite happily, but since I'm usually testing for a set up to the 15 minute mark, I wasn't complaining!


A few bags of cherries have gone into the freezer, ready for pie, muffins or this rather scrummy sounding cake.  And finally, we had cherry cobbler for dessert last night.  I halved the recipe, since it claimed to serve 8 (but we polished off the smaller amount between two and a half of us no problem!).  It tasted good but the texture and appearance wasn't quite what I was expecting.  The finished product kind of looked like lunar craters that had been used for paintball practice - not the type of dessert that makes everyone go "oooh!" when you bring it out at a dinner party - and it was quite sticky round the edges and chewy in the middle.  I understand that you can also put the fruit on the bottom rather than on top, so I'll try that next time; if that fails I shall resort to good old British crumble.


These purple cherries, by the way, were from another tree in the park that I noticed just as I thought we were done with cherries.  Ohhhh no.  Another two boxes made their way into our fridge. 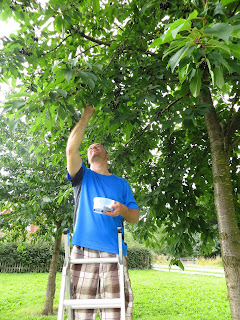 And now, if the amount of green fruit on the bushes is anything to go by, I think we will have a bumper blackberry harvest by the end of August.  Any offers of empty jam jars much appreciated!