July 01, 2012
On one side of Santa Barbara is the ocean; on the other side you very quickly find yourself in the foothills of the Santa Ynez Mountains.  Our excursion in this direction turned into one of those serendipitous days where nothing goes as you'd planned, but it all turns out rather well in the end.  Our idea was to drive downtown, pick up a National Forest pass and go to a park, then drive up to a viewpoint in the afternoon.  Unfortunately Toby downright refused to go in the car, so we plopped him in the pushchair and walked to a local park instead.  It was a pretty little place, with nasturtiums sprawling over wooded banks, and a little stream running through.  There we just happened to get chatting to a local family, who suggested that Gibraltar Road would be a good drive up into the mountains. 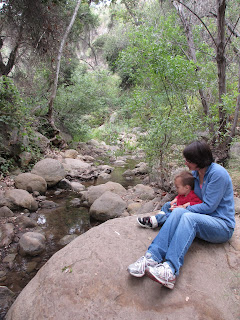 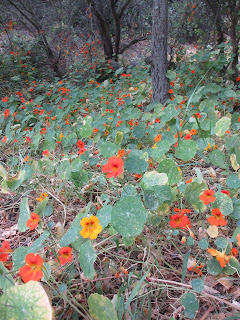 So after Toby's nap we plotted out our route and set off up a steep and winding road.  Graham was having the time of his life, doing some 'proper' driving, while I hung on tight and tried not to look at the edge too much.  That was hard work when the views were so spectacular!  There were multiple pull-offs where you could look back down to the town and the sea, or the other direction into corrugated wilderness. 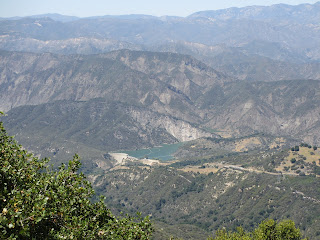 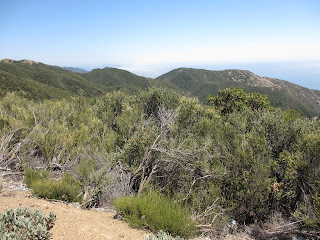 Our map marked a road leading back down to Santa Barbara, which we intended to take, giving us a nice loop drive of an hour or so.  Whether this road really exists or not, we still don't know, for we certainly never saw it!  Instead our nice strip of tarmac turned into a dirt track, leading us further and further into the hills.  We bumped our way along for at least half an hour, seeing not a single other car or person.  The heat got more and more intense - these are desert mountains, the temperature was a good 20°F warmer than at sea level - and the stillness of the dry air when we stopped underscored the immensity of the terrain. 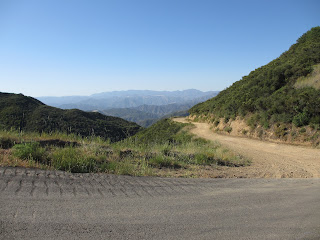 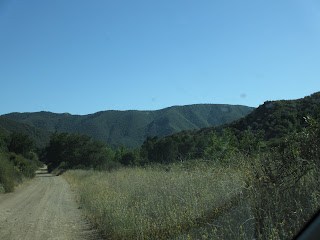 As we pondered whether going on represented complete insanity on our part, the first vehicle we had seen just happened to drive by.  The occupants informed us that Big Caliente Hot Springs were just down the road.  How far?  Oh, only a couple of miles.  Two miles further along the curving dusty road, we found a sign saying "Big Caliente 2 1/2 miles" but having come so far, we pressed on and were rewarded with a deserted car park and a little hot tub beside it, all to ourselves.  Amazingly, we just happened to have our swimming stuff in the car, so we were all ready to slip into the inviting, naturally hot water.  Toby was suspicious at first - "They brought me all this way just to have a bath?" - but once persuaded in, he enjoyed it too. 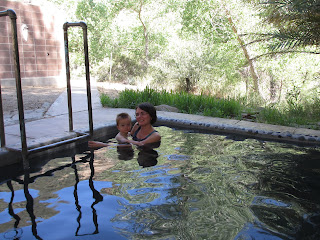 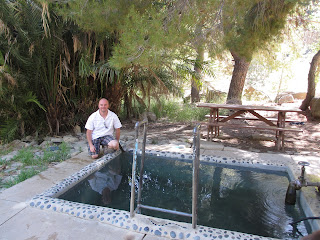 After all that, our car just happened to be rather dirty. 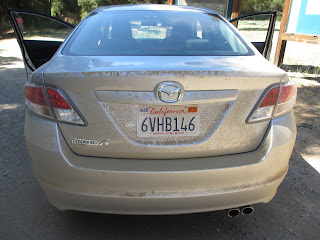