July 25, 2012
Well, you got a little break there, due to Toby putting the laptop out of commission and Graham having his hip replaced.  The laptop is now better and the husband is getting better, so on with the saga!

We thought it would be kind of nice to venture out on to the Pacific Ocean, rather than just look at it from the shore, so we investigated our options.  The Channel Islands seemed like a pretty manageable trip, even with a one-year-old, so we booked a boat and hoped for fine weather.  The Channel Islands National Park encompasses five islands and the ocean around them, just off the coast of California.  Like many islands, they have some pretty incredible biodiversity, with many unique plants and animals.  It would have been great to stop off and see it close up, but actually staying on the island entails taking everything you might want with you.  With a toddler this always seems to involve everything bar the kitchen sink (actually, that could be handy too), so we decided to stick to the wildlife tour boat.


This took us out to the closest of the islands, Anacapa Island, where we admired the rock formations and spotted sea lions basking on the shore.  We would have been very lucky to spot a whale, as they usually feed at the other end of the islands, but we were delighted to have dolphins jumping around us. 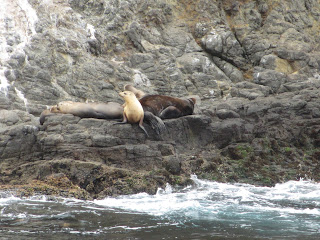 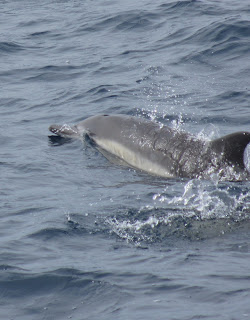 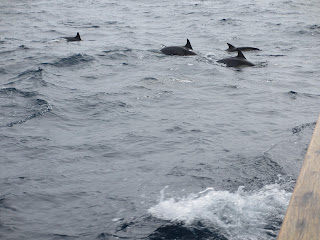 Graham enjoyed the scenery somewhat more than I, as, despite calm seas, I rapidly discovered that I get seasick!  I spent most of the three hour trip staring fixedly at the horizon and trying to persuade Toby that butting his head into my tummy wasn't the best thing to do right now.  He didn't seem affected by the motion, fortunately, and enjoyed splashing through the waves.  All that sea air tired him out, though!


So that was the little boat.  The big boat really was at the other end of the scale!  For our final two nights in California we had got a good deal to stay on the Queen Mary, a 1930s cruise ship now permanently docked in Long Beach.  I have to say we were beginning to wonder about the wisdom of it - it would be our fourth lodging that holiday and offered none of the conveniences of your average cheapo Best Western.  No fridge, free breakfast, free wi-fi or free parking, and a suggestion that the room would be tiny.  Would we survive?


But the moment we walked into our cabin, we were smitten.  There were actual portholes to look out of, and a 1950s style bathroom with big chunky taps, and plenty of space, and you could even, occasionally, feel the ship moving ever so slightly underneath you.


Best of all, we had free rein to roam about all of the ship's public areas.  We happily explored from the heights of the bridge to the depths of the engine room, walking the long corridors which felt like being inside a hall of mirrors, pressing buttons in the walnut-paneled elevators, and imagining ourselves relaxing on the sun deck with no land in sight.  After my seasickness, though, you can imagine I was glad to remain firmly moored to terra firma! 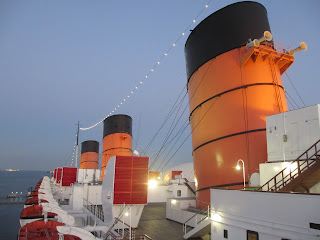 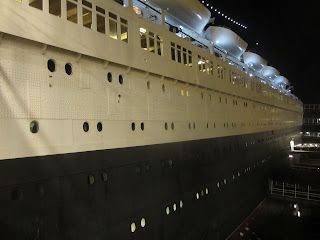 John Evens said…
Interesting, I didn't think I suffered from motion sickness too badly either, but a couple of recent experiences on boats and rollercoasters have convinced me otherwise. I'll be taking a pill from now on - it's not a fun feeling.
26 July 2012 at 14:50