August 01, 2011
Funnily enough, it was the trees that we really noticed this time.  Spreading oaks three times higher than the houses huddling beneath them.  Fat roots wriggling beneath the brick pavements.  And on the highways, you barely got out of town before the road became a channel between two walls of green leaves.  In Texas they have fast food joints and billboards along the interstates.  In Virginia, they have trees.

Richmond is a nicely-situated city; if you go south-east you get to the Atlantic Ocean, if you head north-west you reach the Blue Ridge Mountains.  We did both.


John and Kristal took a day off work so they could accompany us to Sandbridge, where we set up camp underneath a big green umbrella and tried to stop Toby from eating sand.  He was quite a fan of the beach (great texture!) but the sea was far too cold and unpredictable.  One minute it's round your toes and the next it's hitting you in the chest!  Water isn't supposed to behave like that!  It's meant to stay nice and still and let you smack it.


For the rest of us, the sea was a welcome chance to cool off.  It was fun to splash in some waves again.  By mid-afternoon the beach had become almost too hot to walk on, and we gathered up our sand-encrusted persons and possessions and headed for home.


The next day we ventured out in the opposite direction, out to the beautiful countryside of Highland County.  My Uncle Peter and Aunt Mary have been renovating an old house up there for a while now.  It's still a work in progress but quite habitable and full of character (I loved the checker-painted kitchen floor), so we interrupted Mary's redecoration for a couple of days and took her for walks in the woods instead.  We enjoyed visiting with some of her family while we were there too.  There are definitely a few "removeds" in the technical description of my relationship to them, but you'd never know it from their welcome.  Toby and the dog collaborated in trying to do me out of my dinner - while Toby caused a distraction by trying to eat grass, the dog nipped in and swiped a tomato off my plate.  I didn't know which to grab first!

If there is a perfect way to spend an evening it is this: Sitting around a bonfire in the peace of the silent hills, watching the blue of the sky deepen and the stars pop out one by one, until the horizon is dark and the misty brightness of the Milky Way arches overhead.  Some casual conversation and a few sticky s'mores, and the fleeting glimpse of a shooting star.  We stumbled back to the house in a blissed-out haze...


...and spent the next hour trying to persuade a screaming baby to go back to sleep.  He was teething, I think.

Back in Richmond, Toby had his first boat ride, a rather tame jaunt around a portion of the Kanawha Canal in the centre of the city.


John and Kristal kindly babysat one evening so that Graham and I could enjoy a nice dinner and drink together.  Several weeks later, they are still wondering if they really want kids. 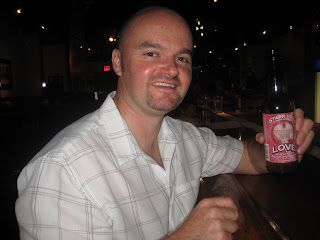 And we were treated to a double fireworks display for the Fourth of July - the city fireworks over the James River, and then, as we turned around, a thunderstorm coming in from the north. 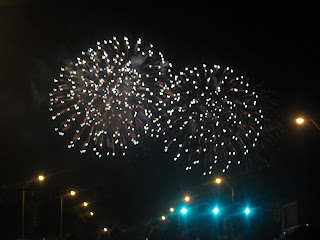 All too soon, it was time to pack our bags again.  No, Toby, you don't need to go in there!