Not for the squeamish

August 02, 2011
Nor for those who have an irrational fear of snakes, or for that matter an irrational love of cute little bunny rabbits.  But for those who are intrigued by the natural world and don't get too freaked out by the ickier bits of it, this was our David Attenborough moment. 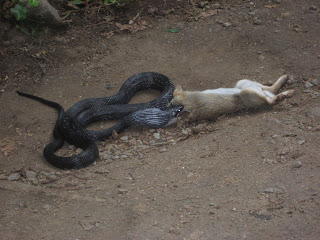 John and Kristal's dog Boudin spotted it first, and went bounding up before the rest of us had a chance to register any more than some kind of mound on the path.  It was so interesting he resisted all Kristal's attempts to call him away for a while.  Even though she quickly identified it as a non-poisonous black snake, and besides, its mouth was far too full of rabbit to bite anything else, we were glad when he was safely to heel. 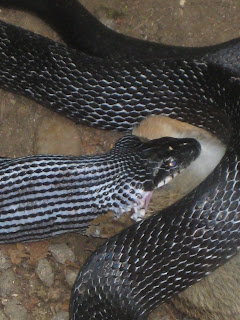 We stood and watched for a few minutes.  The rabbit was clearly dead; whether the snake killed it or just found it, we don't know.  It was eating in a leisurely fashion, which I suppose is fair enough when your dinner is actually wider than your body.  Every few moments it would open its jaws a little and inch its way a tiny bit further up the rabbit.  By the look of it, it was going to be there most of the day. 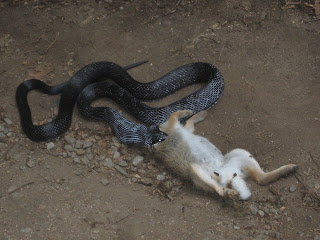 We kept on walking, but felt honoured to have seen something that many people only watch on nature programs.  And it fulfilled Graham's dream of seeing a really big snake in the wild - albeit in Virginia not in Texas!