September 16, 2009
The stuff of life. A ploughmans lunch in a country pub. Cheddar rolls for a picnic in the hills. Brie smeared on crusty French bread. Why, then, do Americans struggle so hard with the concept?

It's not that you can't get decent bread and cheese over here. You can - if you go to posh shops and pay inflated prices. It's that the everyday stuff is so abysmal.

Let's start with cheese. If you go to the regular packaged cheese section in the supermarket, there's a choice of about four varieties. The most flavoursome is the "sharp cheddar", which is about on a par with the mild Cheddar sold in the UK. What's worse is that the packets are all labeled "natural cheese". This makes me depressed every time I see it. What kind of a country is it where you can get unnatural cheese? And the citizens might not know the difference unless it's pointed out to them? 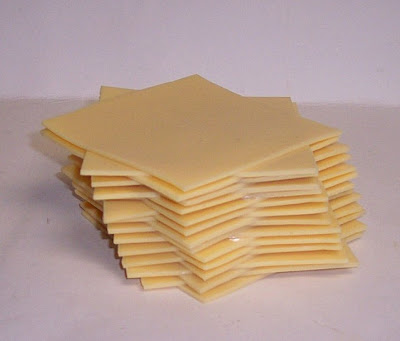 THIS is what receives the proud title of "American cheese". Processed, plastic-wrapped "cheese food". This is what many Americans think of when they hear the word cheese. I have a book - a novel, admittedly, but presumably reflecting real life to some extent - where a well-off 15-year-old girl isn't actually sure what cheddar is. You'd think that a country so much a leader in world affairs could come up with a few decent cheeses. Hey, it's done it with wine. Maybe cheese will be the next big thing.

So much for cheese. We move on to bread. Graham and I have recently started buying the bread made in the in-store bakery I work at, and it's made our lives so much better. At first I made bread whenever possible, but then it got to be summer, and slaving over a hot oven in 100 degree heat is no fun, I can tell you. So we tried the stuff on the supermarket shelves. 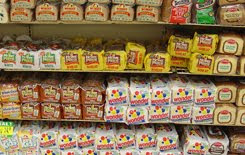 What's wrong with it? What's right with it? For a start, it's sweet. Yes, there is sugar in the bread. Or honey, or molasses, or any other kind of sweetener you can think of. Occasionally I tracked down a brand which was sugar free, but it still tasted kind of sweet. And it's floppy - this weird kind of not-fresh-but-not-stale soft texture. And the slices are small. And it keeps for weeks. I mean, seriously. Even in our frugally air-conditioned flat, this stuff wouldn't go mouldy for ages. Convenient, sure, but what in the world do they put in it? And do I really want to eat it?

I started to wonder the other day what Americans actually do with this bread. They obviously buy it, or the shops wouldn't sell it. But it makes pathetic sandwiches - nothing like the packed rolls which Subway and its ilk purvey. It makes pretty mediocre toast. I guess maybe kids would eat it. Oh of course! It's a playdough substitute. I should have known.


Culturally, Wonder Bread is associated with ... the childhood habit of playing with the malleable bread to form small sculptures or even projectiles.

(from a complete guide to American life)

And yes, I realise that British shops are not free of plastic white sliced. Nor yet processed sliced cheese. But you can buy packaged bread which has a little substance and taste to it, and ages at a respectable rate. And a mature cheddar or ripe brie without breaking the bank. Mmmm. Cheese sandwich, anyone?

But is it food?

Sally Eyre said…
I so agree with you about the cheese, although here you have a decent range and availability of soft cheeses but for a decent hard cheese . . . . we tend to buy it once a year and choose it to go well with Christmas cake. Mmmmm.

Bread is not really an issue and one of the supermarkets makes tiger bread - it has a crackled top. Would you know of it, or have a recipe? I've looked and failed to find one and it is scrummy.
8 October 2009 at 02:15