February 11, 2009
Over near Dallas is a suburb called Las Colinas, planned and built by a guy called Ben Carpenter on his family's ranch. Despite concreting over swathes of prairie (which it could be argued was going to happen sooner or later anyway) he obviously had an eye for beauty, and commissioned an African sculptor by the name of Robert Glen to create a sculpture for the centre of the community. 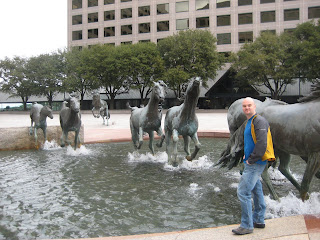 The subject chosen was mustangs, wild descendants of the horses brought over to America by the Spaniards, who used to roam free on the Texas plains. At 1 1/2 lifesize, they are really impressive. 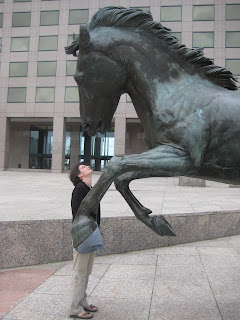 There's a small museum run by a very friendly lady who showered us with advice on where else to go while we're in the country. We followed her promptings on a couple of local things, and went to see some marble cows (not half as impressive as the mustangs) and a statue of Ben Carpenter telling Graham off. 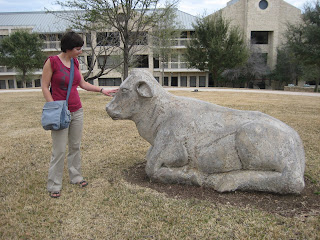 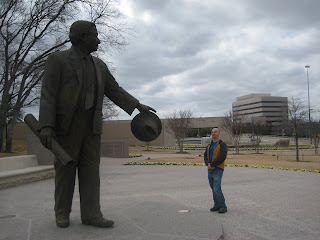 We got some lunch at Joe's Cafe, one of those home-cooking establishments that I can't think of an equivalent to in the UK. Graham had chicken and dumplings, mashed potato with white sauce (why do they do that?) and red beans; I had meatloaf with potatoes and peas, and we rounded it off with hot fudge pudding, the banana pudding having run out. 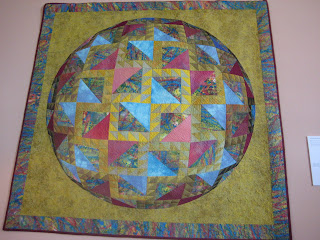 The local art center was showing an interesting exhibition of photos by black artists, and a collection of amazing quilts. I don't like to think how many hours went into them, but the end result was certainly worth it. 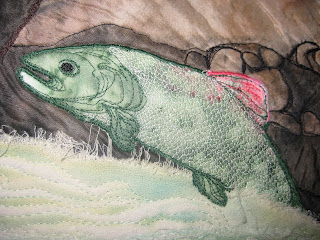 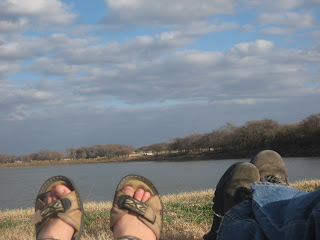 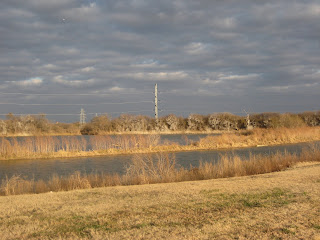 After a stroll by the river and a short snooze on the bank, we started driving home. On the way we passed an Indian supermarket, and just had to pop inside. It was the real thing - 2 lb bags of chili powder, sacks of rice, weird Indian snacks with indecipherable ingredients, and even Birds custard powder, Smarties and PG Tips! We browsed around in a state of bliss for a while, and came out with some naan bread and some strange spiral rice snacks. Given that two more chillis have ripened on our little plant, this is a cue for a curry, methinks.