Georgia on my mind...

February 26, 2009
In a space of time but little longer than Scarlett's seventeen years, Atlanta had grown from a single stake driven in the ground into a thriving small city of ten thousand that was the centre of attention for the whole state. ... The people who settled the town were a pushy people. ... They were proud of the place, proud of its growth, proud of themselves for making it grow. Let the older towns call Atlanta anything they pleased. Atlanta did not care.

- Margaret Mitchell, Gone with the Wind

Before this trip, the main thing I associated with Atlanta was the book Gone with the Wind, and so I knew a small part of its history: that it had been a major railway and supply hub in the Civil War, and been burned to the ground when taken by the Union soldiers. This didn't daunt its "mighty pushy" inhabitants, however, and the city was quickly rebuilt. It still gives the impression of rebuilding itself today; as we walked around, the contrast between dilapidated old wrecks and shiny new towers was often startling, creating the sensation that the city had been somewhat down on its luck but was doing all it could to improve matters. 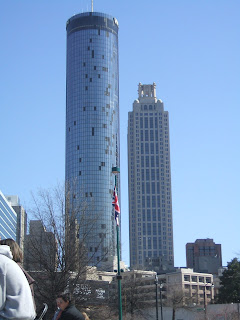 One of the shiny new buildings was the brand-new World of Coca-Cola, which was on our list of places to visit. I'm not particularly a fan of Coca-Cola, but by the end of the tour I felt like I ought to be, they were singing its praises so much! It was a really good experience: there's a mini bottling plant, lots of Coca-Cola memorabilia and a "4-D" film about the taste of Coca-Cola, which included 3-D glasses, moving seats and sprays of water at appropriate points! At the end you can taste various Coca-Cola beverages from around the world. Sprite Pineapple was quite nice, and a minty one from Greece, but others ranged from bland to downright revolting! We managed to avoid succumbing to the lures of Coca-Cola merchandise, although I was tempted by a T-shirt which said "Make Love not Trash". 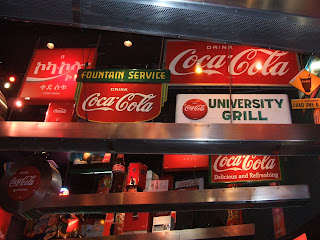 We had lunch in the Olympic park and enjoyed a musical display by the Olympic Rings fountain. The jets sprayed in time to various exhilarating tunes played over the loudspeakers, creating some really spectacular effects. 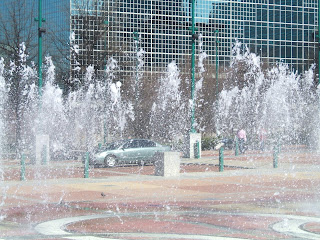 We'd been told that there were some good restaurants in a part of town known as Virginia-Highland, where two roads by those names meet. Investigating further, we discovered that they were so good that they were all crammed full on a Saturday night. We resigned ourselves to waiting half an hour, but it was worth it; if you're ever in Atlanta, I would recommend a meal at Murphy's. 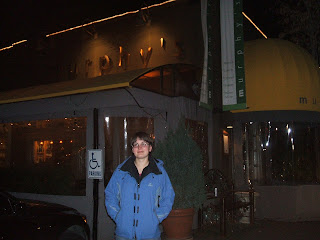 The next day we drove north, into the mountains. Temperatures were around freezing but the sun shone and it was beautiful. And we had it practically all to ourselves. 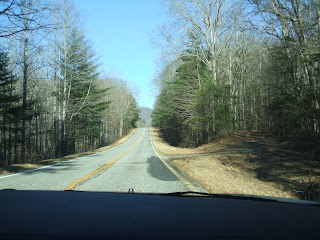 First we went to Blue Ridge in the hope that the Blue Ridge Scenic Railway might be running, but we were precisely one month early, and the train sat patiently on the tracks in a near-deserted town. We found lunch at a cafe run by a Frenchwoman, a rarity in this part of the world, and then drove on to McCaysville, where the train would have taken us if it had been running. This is actually two towns in one, the other half being called Copperhill, and the two together straddling the Georgia-Tennessee state line. Of course we had to straddle the GA-TE line as well, and then drive up the road to the Tennessee-North Carolina boundary so that we could say we'd been there too. Graham was very pleased at being able to bag 3 states in one day! 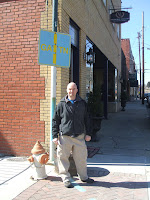 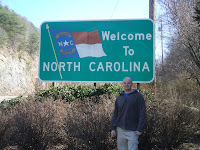 The highest mountain in Georgia is Brasstown Bald. In true American fashion, there's a road built to the top, and you can drive all but the last half mile, thus making it considerably easier to ascend than say, Scafell Pike, despite being about 1500 ft taller. We shuffled happily through piles of snow on the observation platform, admired the view of four states (though we couldn't tell which was which) and came down again before Graham's ears actually turned blue and fell off (he'd forgotten his hat). 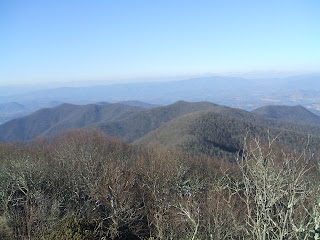 There are a number of pretty waterfalls in the area, and we decided to squeeze in a visit to Helton Creek Falls before night fell. The directions we had were pretty good except for neglecting to mention that the road to the falls was unpaved and full of potholes. Lurching through deep forest in the gathering dusk, we wondered whether we'd actually reach our destination, but finally saw it. It was a pleasant little spot and we would have been tempted to paddle in the summer, but at this time of year taking any clothing off was a definite no-no. 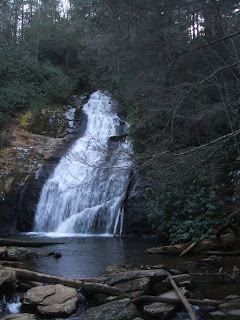 In fact, retreat to our motel room with the heating on full blast was the only viable option, and we settled in for an evening sprawled on the king-size bed watching the Oscars and eating crisps. 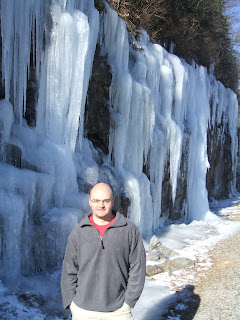 The next morning we drove along a "scenic byway" which proved to be more scenic than either of us had imagined. In the cold, water dripping from the rocks along the road had frozen and created huge expanses of icicles shining in the morning sun. Combined with the amazing views, the effect was stunning. 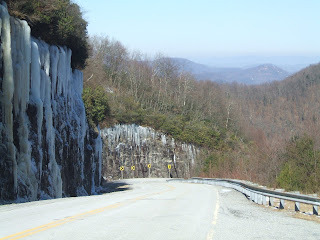 Unicoi State Park was almost as stunning, with the blue Smith Lake reflecting the blue sky, and hardly anyone there but ourselves. Off season is definitely the way to go! 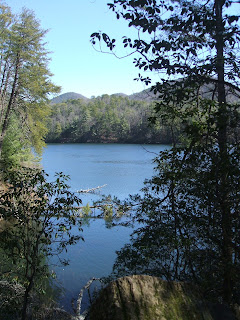 Finally we paid a visit to Helen, a town built in the style of an Alpine village. This was a calculated move to revitalise the place and give it character rather than any kind of natural development. We wandered around and took a few photos, and were lured into a restaurant by its promise of free soup. For a restaurant located in the "most photographed building in Helen" it didn't seem to set the right tone, somehow. The soup was chicken with mini alphabet pasta (children's soup?); the German potato pancakes came with apple sauce and sour cream (or is that authentic?); the tablecloth was Italian themed and held together with sellotape; and we were served by a slightly strange lady who seemed desperate to have someone to talk to. 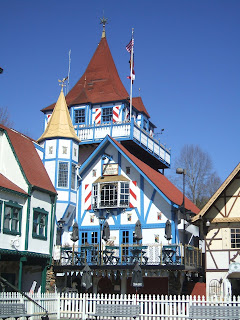 (Oh, OK - I just looked up German potato pancakes and they actually are served with sour cream and apple sauce. Strike that one off the list.)
Reluctantly, we headed south into the lowlands again, both feeling like we could have spent a lot more time up in the hills. If we're feeling energetic one day, maybe we'll come back and hike the Appalachian Trail - hey, it's only 2000 miles! For now, we've just got Georgia on our minds, and all the beautiful things we saw there. (We don't, however, have the souvenir bottles of Coca-Cola anymore. We forgot they were in our bag when we tried to take it as hand luggage, and were forced to down them in the airport security area.)
More photos now on Facebook

John Evens said…
Looks like you guys had a nice trip. When I heard you were going to Atlanta I thought it was a slightly odd choice for a weekend away, but as soon as I realised it included visiting the Appalachian trail it all made perfect sense.
28 February 2009 at 12:50

Eyres in NZ said…
Much prefer the blog to the facebook pictures at it makes so much more sense with some background info. Loved the icicles - we're lucky if we get 10 frosts a year and they never last past 10 am. All the travelling sounds like fun - looking back I'm sure we didn't do enough of it before K arrived. Love Sal
4 March 2009 at 16:34