"Life's too short to live in Dallas" runs the slogan in a local BBQ establishment. But it's nice to visit once in a while. 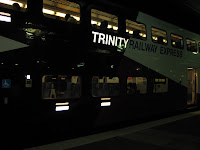 The TRE is only $5 return and is an exciting double-decker train (why don't we have those in the UK?) so we decided to take the trip over on that. Unfortunately we stupidly missed the one we were aiming for, arriving on the platform just in time to see it pulling away. We had to wait over an hour for the next one. 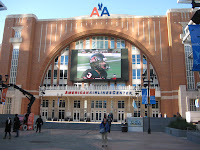 However, once we got to Dallas we had a very nice afternoon. We disembarked at Victory Station, next to the American Airlines Center. AA sponsor almost everything around here, it seems; no wonder they're struggling financially! The big outdoor screen was showing, as always, American football, and despite the chilly air several people were standing around watching it.

From there it was a short walk over to the Arts District, which hosts a number of museums. Due to our missing the train we were there a bit late and most things were closing, but this worked to our adv 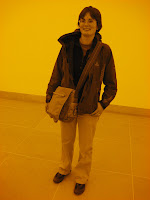 antage in the Dallas Museum of Art, where we got in free for the last 4 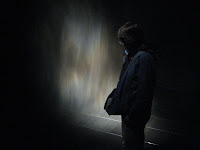 5 minutes or so. We wandered around an exhibition called "Take Your Time" by Danish-Icelandic artist Olafur Eliasson. His works are described as "devices for the experience of reality" and included such diverse things as a wall covered with moss, lights projecting coloured geometric shapes on a wall or shining at a rotating mirror, and sequences of photos showing the same landscape from dawn to dusk. We particularly enjoyed the yellow-lit room which made everything look black and white; seeing your skin look grey is weird! Another room was completely dark except for light shining on a spray of water - that was pretty cool too.
When we came out the setting sun was shining on the buildings and producing some pretty artistic effects of its own. 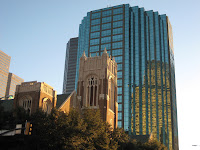 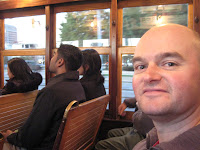 There's an old trolley car which runs up McKinney Avenue. You can take the trip for free, so we hopped on for a ride. The car we were on had been restored over 8 years by a couple of enthusiasts, having been used as someone's house for about 30 years before that. It had very funky reversible seats; the back flipped from one side to the other so that you could face whichever way the trolley was going. The whole thing was, in fact, fully reversible, with a door and a driver's station at each end. The driver simply unhooked all his handles from one end and took them to the other when he changed direction. Then he nipped back to get his banana! He was a friendly guy, and when he noticed us trying to take a photo at the end of the journey, he insisted on getting someone else to take one of himself and the two of us. 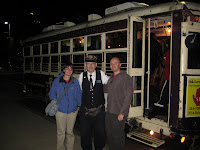 Life's too short to live in Dallas. But it's nice to visit once in a while.
Posted by Martha at 10:15

Email ThisBlogThis!Share to TwitterShare to FacebookShare to Pinterest
Labels: Days out, Texas